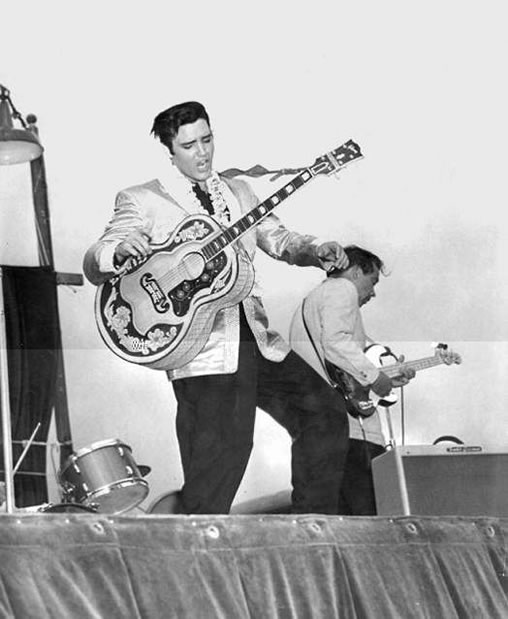 Speaking with a Southern slur and often punctuating his answers with 'Sir', Elvis freely admitted', I'm pretty green when it comes to clothes. I don't pay over $7 for a shirt and $10 for a pair of shoes... but I do plan to stock up on a Hawaiian outfit while I'm here'. Elvis wore a white knit sweater with a large rolled collar, a wine-colored sports coat and black slacks. Asked if he might visit any neighbor islands, he said', It depends on how we're received here. Elvis explained their sudden decision to visit the Islands this way', It was a real rush deal. We were in Hollywood to make a picture (King Creole, then unnamed), but it was postponed until the first of the year. We weren't doing anything, so Mr. Parker asked if we'd like to go to Hawaii. I said', Huh, and was packed right away'.

As for his traveling companions, mostly high school friends and disc jockeys, Elvis said, 'I like to have my friends along... it gives me a little touch of home. Anyway, it's more fun to see things together. I've got a waiting list... pretty long one... of friends who want to make trips with me. In fact I've heard from lots of so-called old friends from years ago who always say, 'You remember me, don't you?' As for such nicknames as 'Elvis the Pelvis', Elvis said 'There's nothing I can do about it, but it sounds like little kids trying to find something to rhyme with Elvis'. He said, 'I would eventually like to be a good actor. I haven't had time up to now, but I would like to study for it'. Asked why he didn't use the plane, he said, 'I don't like airplanes. I'm scared stiff of them. In fact, we could've been on the one missing now'. The Jordanaires and his band arrived by plane later the same day. 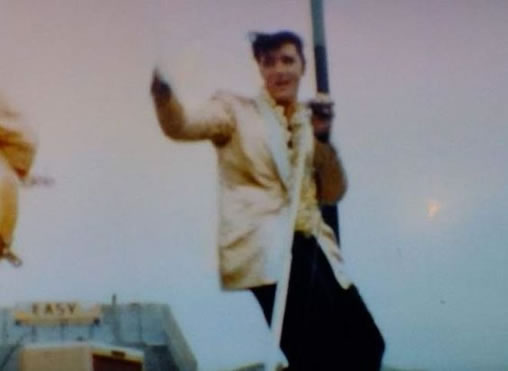 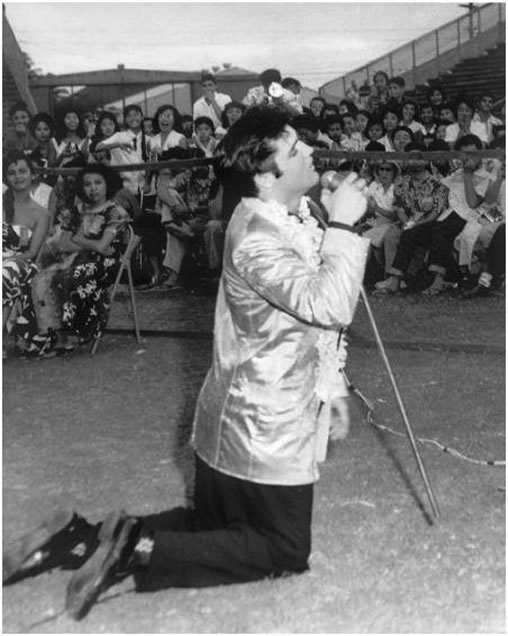 On Sunday, November 10, Elvis appeared twice at the Honolulu Stadium and drew 14,963 spectators who paid $32, 000. Elvis was reported to get more than half of it. After juggling, hula, sword dancing, and jive, Elvis appeared on the open air stage dressed in a gold lame jacket, a black shirt, and black slacks. Elvis sang, 'Don't Be Cruel', 'That's When Your Heartaches Begin', and many more, but the screams drowned out his voice a great portion of the time. Elvis had only to say, 'Thank you very much', and the audience would come apart. He'd scratch his nose... another scream. He'd laugh... another scream. At times, Elvis seemed to deliberately drop his arm or wiggle his shoulder just to hear his fans react. He performed for about forty minutes. Surprisingly, he spent more time at the piano than he did with his guitar. As he sang the closing number, 'Hound Dog', he sat down on the edge of the stage. .. and then jumped down, off the stage, onto the grass section in front of the stage. He rolled on the grass and moaned out the words to, 'Hound Dog'. He kissed a girl across the barricade set up to keep his audience away from the stage, grabbed a coconut hat and paraded with it on his head. After he finished the song, he stepped into a waiting car and sped out of sight.

After the matinee performance, Elvis held a press conference at the Hawaiian Village Carousel Room:

Q: What do you think of the local fans?

A: Terrific! I want to say my reception in Hawaii was one of the most well-behaved of my career. I've been on stage long enough to tell if an audience has manners, and today I could have safely leaped off the stage into the midst of them.

Q: What are your vital statistics?

Q: Do you exercise when you're not singing? 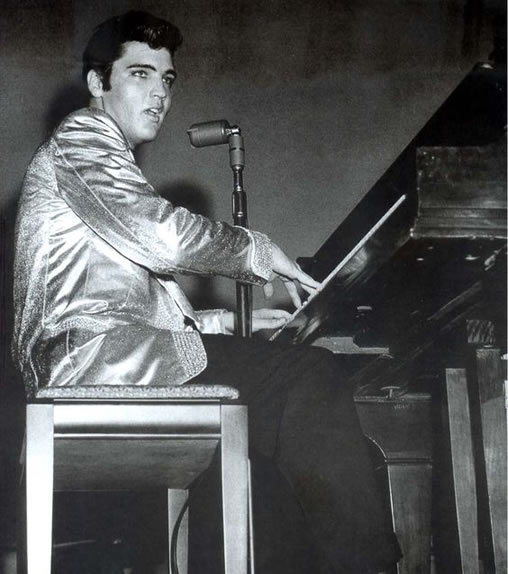 Q: What are your favorite colors?

A: Depends on what it is. Cars I like in loud colors, clothes in dark colors.

Q: How often do you have a haircut?

A: Not very often. And when I do, it doesn't look like a haircut. 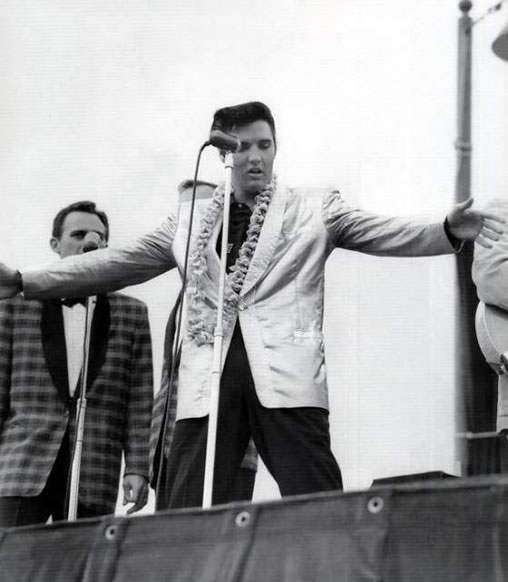 Q: What is your ambition?

A: My ambition is to be a good actor. But I'll never put my singing second 'cause that's what gave me the opportunity to become an actor ... I sing a lot at home ... I think that I'm learning more ... I enjoy making movies.

Q: What do you think of your film, 'Love Me Tender?

A: My favorite recorded tune is 'Don't Be Cruel. I also like 'You'll Never Walk Alone' and ' Til '

Q: Do you think of your fans when you are at a recording session or performing, on stage?

A: You have to think of them to try to get songs that people will like.

Q: Did you invent Rock In' Roll?

A: I explored it. It existed long before I did. It was called Rhythm and Blues. I just tried a new interpretation.

A: Irish, I reckon and some Italian. Never gave it a thought.

Q: What's the first thing you'll look for in your wife?

Q: How about her Southern cooking?

Q: Has Success affected your life?

A: Of course. I never realized anything like this was possible... that I'd ever be in Hawaii or Las Vegas or Hollywood. It's quite a change to jump into this stuff. If you're not careful., you'll crack up.

A: I'll have to ask my manager. Colonel Parker brought out the fact that why be on TV and let 60 million people see me free when we charge the movie makers so they can charge the audience to see me. Understand? I don't.

Q:Do you feel an obligation to your public?

A: I do feel an obligation. I'm very careful not to do anything that would disappoint my fans. I behave myself all the time. People have preconceived ideas about me... it's natural. I've often said I won't like that person, and then found out he's a nice guy.

Q: What's your - reaction to those older people who don't like you?

A: I can't please everybody. Maybe they're Pat Boone fans.

On November 11, Elvis did another concert at Schofield Barracks Military Reservation and drew another 10, 000 fans. This was Elvis' last live performance before joining the army. On November 13, Elvis left for the mainland on the Lurline. Colonel Parker planned an Australian tour following their visit to Hawaii, but it was to be. Colonel Parker said', We're always open to a last minute switch'.

The Fifty Voices of Elvis Presley

When Elvis Said 'Aloha' From Hawaii, The World Watched

Beyond The Reef | The Elvis Presley Hawaii Connection

Aloha From Hawaii | The Concerts

Aloha From Hawaii | The Reviews

Elvis Presley with fans after arriving at the Seattle airport | April 29, 1973