Elvis Presley's Draft Card. This is Elvis' Selective Service Registration Certificate -- more commonly referred to as a 'draft card' -- dated January 19, 1953 (11 days after his 18th birthday) and signed along the left edge by Elvis in blue ink and co-signed by a local board clerk along the bottom. 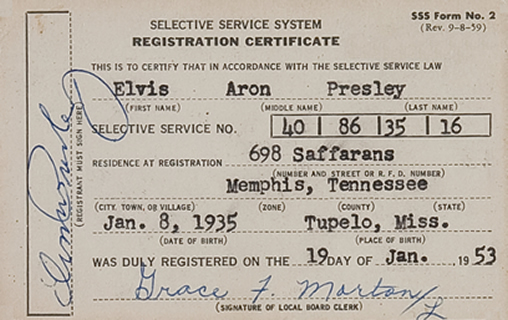 Elvis began his professional music career the following year but had to put it on hold when he was called for active service. Elvis had been notified on December 19, 1957 that he'd been inducted, but got a deferment until March, 1958 so he could complete the film King Creole, so, as the earnest young man explained to the draft board, 'these folks will not lose so much money, with all they have done so far'.

Inducted into the U.S. Army as a private on March 24, a horde of photographers and reporters swarmed as he arrived at Fort Chaffee for basic training. Elvis told them that he was looking forward to his tour of duty, saying he did not want to be treated any differently from anyone else. 'The Army can do anything it wants with me.' After training at Fort Hood, Presley joined the 3rd Armored Division in Friedberg, Germany and was honorably discharged in 1960, at the rank of sergeant.

Elvis Presley in the U.S. Army