He was, after all, the King of Rock 'n' Roll, and he dressed like it. Fans never saw Elvis on stage in anything less than the best. Even early on in his career, he carefully chose his fashionable stagewear. He wanted to give the audience a thrill – not just with his music, but with his look. All these years later, Elvis' style is as iconic as his music.

Elvis had great fashion sense, but it was designer Bill Belew who helped take Elvis' fashion to the next level. Belew designed clothes for Elvis to wear both on and off the stage.

'You could be daring as a designer and put anything on Elvis and he could make it work', Belew said. 'And the simplest outfits that didn't seem particularly remarkable on the rack transformed into something spectacular when Elvis put them on. He was that beautiful and powerful a presence'. 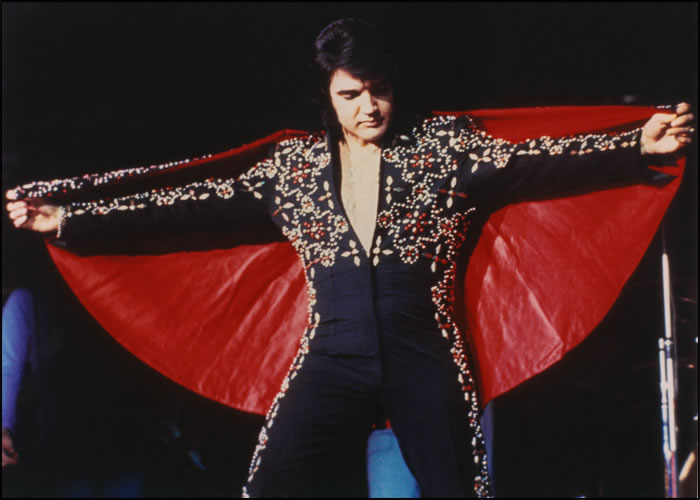 The Black Conquistador jumpsuit, designed by Belew, was worn by Elvis on stage in Las Vegas, Honolulu, and San Bernardino. It was inspired by a tile floor pattern.

On June 11, 1968, Elvis met with costume designer Bill Belew to go over ideas for his upcoming TV special.

Elvis' famous black leather suit was designed by Belew, as were several other pieces that were seen in that special.

The suit is on display at Graceland. 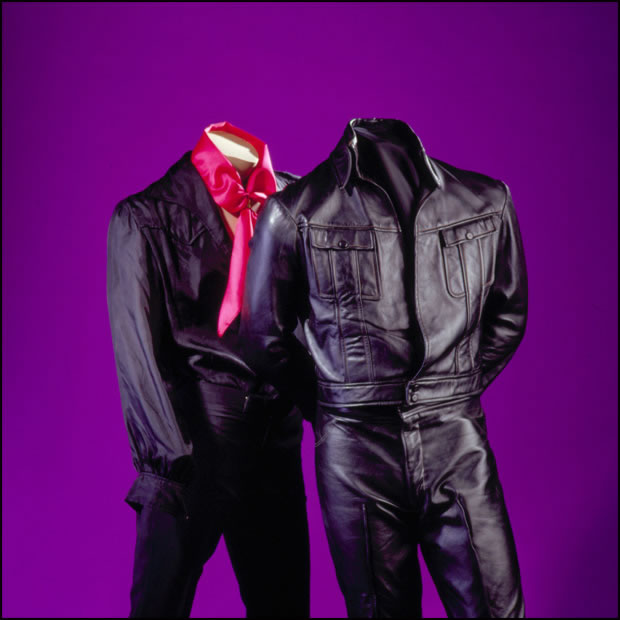 Elvis' '68 Special was iconic for many reasons – one of them being the black leather suit he wore.

Belew designed for other musical acts and celebrities, such as Gladys Knight, The Band, The Jacksons, Brooke Shields and the Osmonds, but he's especially remembered for his designs for Elvis.

Elvis is known for so much – his velvet voice, his Southern generosity, Graceland, his pink Cadillac and, of course, his eye-catching jumpsuits. Belew designed them all, and many of them featured elaborate embroidery by Gene Doucette. 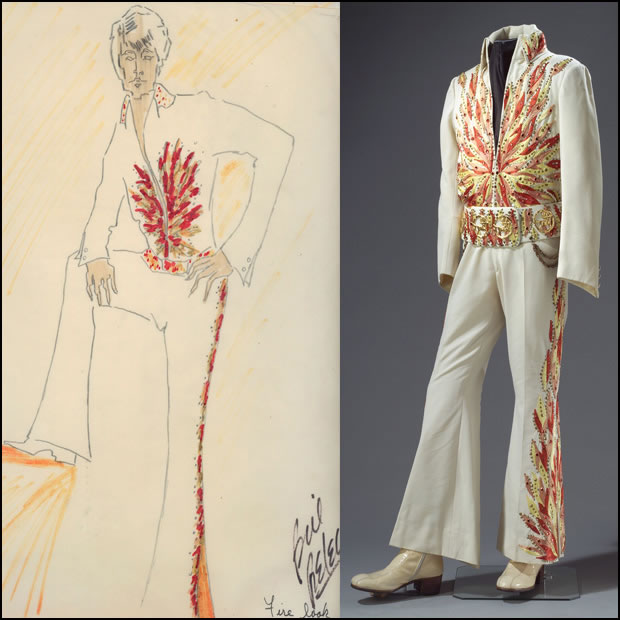 Bill Belew's design for the Flame jumpsuit is on the left, with the actual jumpsuit on the right. 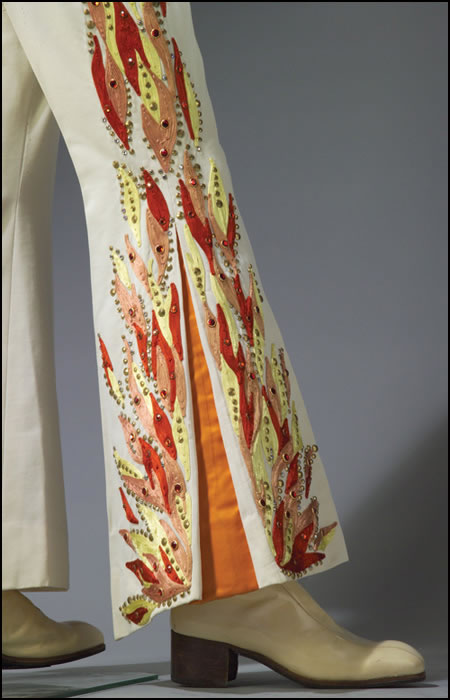 Check out the beautiful detail on the Flame jumpsuit. Elvis wore this suit in 1976 at shows in Dayton, South Bend, and Duluth.

There are actually two versions of Elvis' Flame jumpsuit; the other version's kick pleats are red, while this versions is orange.

Belew said that many of Elvis' jumpsuits were white to allow the stage lights to truly capture Elvis on stage. They experimented with several colors, however, such as red, black and blue. 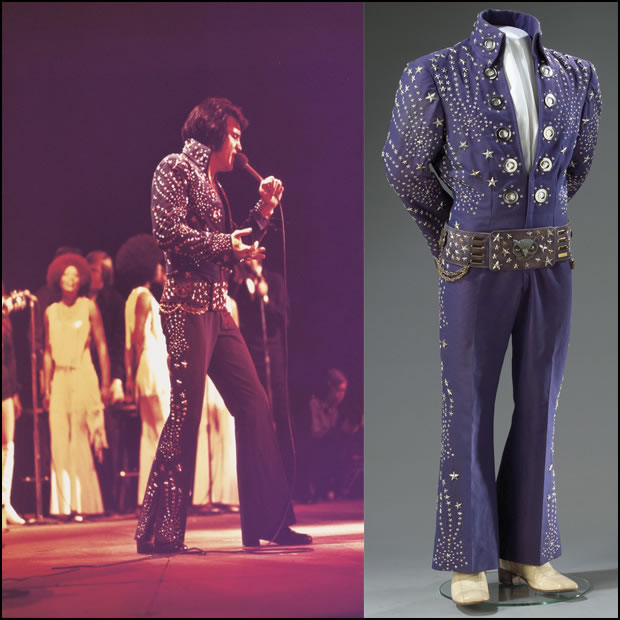 Most of Elvis' jumpsuits were white, but not all of them. This is the Owl from 1972 while filming his second concert documentary, 'Elvis on Tour'.

Another of Belew's celebrated jumpsuits is the American Eagle, which Elvis sported in the 1973 'Aloha from Hawaii' special.

Eagles show up in several other of Belew's jumpsuits. He also created a colorful Chinese Dragon jumpsuit, four Phoenix jumpsuits (white with turquoise, dark blue with silver, white with red and white with black) and one called the Black Butterfly, which is covered in beautiful golden butterfly studs. 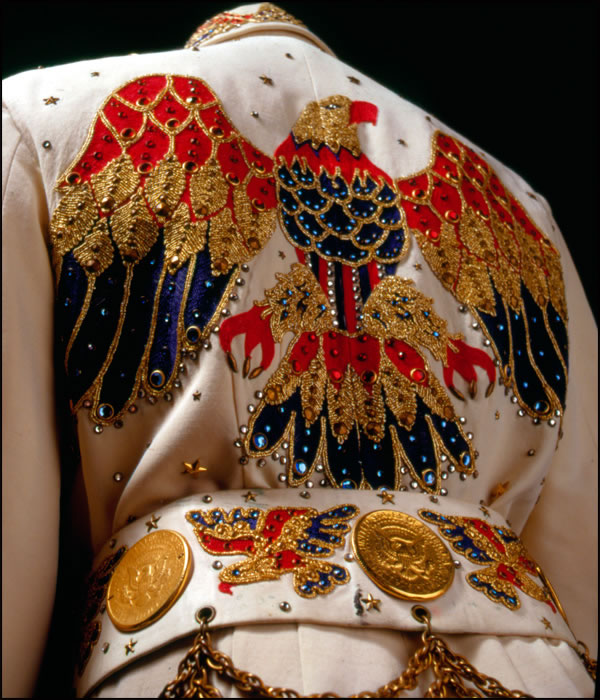 Elvis' patriotic Eagle jumpsuits are a fan favorite, and the detail work is exquisite.

Belew didn't just design jumpsuits for Elvis. He also designed those elaborate belts, as well as three-piece suits and much more.

These outfits make Elvis' already-powerful stage performances even more entertaining and memorable. And while some stars today go for the casual look on stage, many have been inspired by Elvis to make a statement on stage with specially designed, tailored, sparkling outfits. Belew didn't just create eye-catching stagewear; he created works of art.

What's especially incredible about Belew's work is the detail.

See these jumpsuits and outfits up close here at Graceland.

We have been asked this a few times.

While a fascinating subject and the apparent links are undeniable, there is no evidence that either Elvis' hair style, his TCB logo or his concert jumpsuits were based on Capt. Marvel Jr. Yes, Elvis' stage outfits (with a half-cape similar to those worn by the Marvels) and his TCB logo (with a Marvel-esque lightning bolt insignia) could be said to show inspiration from Captain Marvel Jr. there is no proof. In fact, the evidence of the opposite is quite clear as you can read via the above article on Elvis' Jumpsuits and our interview with Bill Belew, the man who designed Elvis stage suits. You can form your own opinion though!