Q & A With Winfield Scott About I'm a Roustabout

How did you start in the business?

I started in a vocal group called The Cues and we worked for Ahmet Ertegun on some sessions with LaVern Baker.

What was the first successful song you wrote?

I wrote Tweedle Dee for LaVern. I presented parts of it to Ertegun during a rehearsal, and he played it for LaVern. She liked it and I brought in the whole song the next day. (After finishing writing it that night.) It was a huge success, and much to my surprise it turned out that a very young 19-year-old Elvis liked the song and performed it live on his shows. Unfortunately he never made a studio version of it.

How did you end up writing for Elvis?

Songwriter Otis Blackwell was a good friend of mine and convinced me to start writing for pop artists as opposed to just R&B performers. Otis had written several songs for Elvis including classics like Don't Be Cruel and All Shook Up, and he had learned just how much more rewarding it was to write for a star like Elvis.

What were the songs you wrote for Elvis?

In early 1962 we struck gold and had three songs recorded in just a few weeks. Return To Sender and We're Comin' In Loaded for the film Girls! Girls! Girls! and Easy Question for the Pot Luck album. We wrote One Broken Heart For Sale which became the hit single for the next movie, and Please Don't Drag That String Around which ended up on the b-side of (You're The) Devil In Disguise. A few years later I wrote Long Legged Girl with Leslie McFarland and in 1970 Elvis recorded Stranger In The Crowd which I had written on my own.

Q: What is the biggest success of them all?

As I understand it Return To Sender has sold about 14 million copies in the U.S. alone.

What's the story behind Roustabout?

When Elvis made a movie, many writers were asked to submit songs for his films. Elvis would choose the ones he liked and then record them. Otis and I wrote a song for the 1964 movie Roustabout and Elvis recorded it. Movie producer Hal Wallis listened to the song but he objected to the lyrics because they had Elvis saying he wanted to tell his boss to 'stick it in his ear'. Mr. Wallis demanded that a new song called Roustabout be commissioned from other writers so our version never made it into the movie.

Q: So what happened to the song?

I had a copy of it on acetate and forgot all about it. This happened almost 40 years ago.

When did you realize that you had something unique?

Well, I didn't really think about it all these years. Then recently during an interview with a New Jersey newspaper reporter, I mentioned having a copy of a song I wrote that Elvis recorded for a movie but was never used. A few days later I got a call from BMG's Elvis Presley producer Ernst Mikael Jorgensen, who had done an interview with the same newspaper. Through his conversation with the reporter, he realized that the song I had made reference to had to be my version of Roustabout. He came to my home and listened to my record, and subsequently we made a deal. The original story he and I were interviewed for was never printed and the journalist left the paper.

How do you feel about the song getting released so many years later on the Elvis 2nd To None CD?

I'm surprised, happy and curious to see what kind of impact it will have.

How would you describe the song? 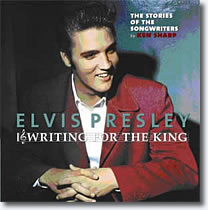