Although it only seems like yesterday this time 25 years ago that I was in San Francisco for Elvis' concert of November 28, 1976 at the Cow Palace.

I had been to the US a number of times without catching an Elvis concert but this time thankfully (as only 32 months later the King was dead) I was not going to miss out.

Thanks to local member Hedy Drissen and Cow Palace manager, John Root we has scored front row seats which was an unbelievable bonus. The prelims are a blur as nobody paid much attention - Elvis was the only topic of conversation! 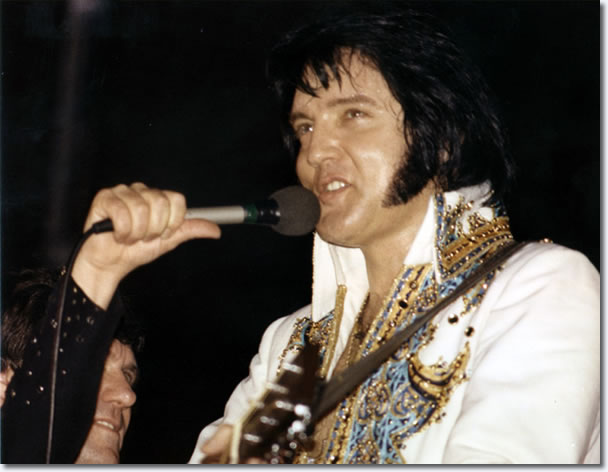 Despite what many books say, Colonel Parker was very much in attendance and keeping an eye on everything. In fact, it was our club T-shirt that drew his attention and I had the pleasure of talking with him. Despite the many reports to the contrary I found him to be very amicable and openly frank and honest in his comments.

As for Elvis travelling to Australia (there had been rumours in the local Australian rags) he gave a straightforward 'NO!'.

He was totally honest in saying the '...the money was not in Australia' and that if Elvis toured in this region it would be to Japan. He further stated that Elvis was not interested really in overseas tours.. except maybe for Germany which was on the cards for 1978 as Elvis wished to thank the German people for their hospitality during his Army days there.

We (meaning Wayne Hawthorn and his first wife, Gina) had the pleasure of talking to a very beautiful and friendly lady in Linda Thompson, who was seated next to us front row!

'Marriage?' was the immediate question asked Gina blurted out which that offered a very quick '... awh not really on,' response from Linda. Ironically, it was that very night that Linda and Elvis ended their relationship.

There certainly was no the slightest hint of what was to come. For during the concert Linda walked the couple of paces over to Elvis and asked for his scarf which she then gave to Gina (a cherished moment for her at the time'

Elvis was in exceptional form that night. Despite rumour of ill health, he appeared vibrant, suntanned and fit.

The first thing that struck us were his piercing blue eyes. I'm sure each and every one of the 17 odd thousand people, whether front wow or in the bleachers, felt he was looking straight at them. Combined with an infectious smile his presence was awesome to say the least.

Elvis went through some 23 songs and proved he still had that magical recipe that could whip audiences into frenzy. This was no Vegas crowd. On no less than six occasions there was a stampede towards the stage consisting mainly of the younger female brigade.

Teddy Bear and Love Letters were two of the songs that drew such a response but it was the suggestiveness of Fever that drove them wild.

With slow pelvic movements, wicked smile and caresses of the stand-up mike more reminiscent of the 50's Elvis had them eating out of his hands.

Those poor security guards should have bee paid ten-fold just for that one song!

Throughout it was obvious that Elvis just loved every second of the 'tease'. One could just hear him thinking '...here I am 20 years later and I've still got 'em goin' crazy!.'. Yes sure he surely did!

Elvis late called for his guitar '...just to prove he could play' and strummed his way through fantastic renditions of Blue Christmas and That's All Right.

All too soon - it was all over!

Many of the crowd seemed too stunned to move. Elvis had hit them like us like a thunderbolt that night!

A memory I will cherish for all time...