Elvis introduced Hank Garland as 'one of the finest guitar players anywhere in the country', ... Garland worked with Elvis from 1957 to 1961, and was playing on the soundtrack for the movie 'Follow That Dream' when his 1959 Chevy Nomad station wagon crashed near Springfield ....

The music is still in his fingers.

Place a guitar in the hands of legendary Hank 'Sugarfoot' Garland and he's quickly plucking strings, playing along with a black and white television image of himself from four decades ago on 'Hometown U.S.A'.

Ask him about the mythic figures he's worked with in Nashville, and he'll pause and smile - almost as if to give his brain time to rewind - before answering.

Four decades after an auto accident almost killed him and ended his brilliant music career, Garland is fighting ill health, trying to pry royalties out of former record companies and talking with Hollywood about a movie based on his life.

Time was, Garland was the talk of Nashville, known for musical riffs that could take a recording from humdrum to dazzling, as he did on Elvis hits like 'Little Sister' and 'Big Hunk of Love'. He also pioneered playing jazz in the country music capital.

'He is heralded as a quintessential Nashville studio guitarist', noted musician Wolf Marshall said via email.

In addition to Elvis, Marshall said, Garland contributed to the music of the Everly Brothers, Roy Orbison, Patsy Cline and many others; was at the forefront of the rock 'n' roll movement; enjoyed a prestigious career as a country virtuoso, pioneering the electric guitar at the Grand Ole Opry; and inspired jazz instrumentalists such as George Benson.

Garland's star burned out following the September 1961 accident, which along with a series of 100 shock treatments administered at a Nashville hospital left him a shadow of his former self.

But what a career he had.

Garland proudly displays the ukulele that Elvis gave him after the King played it in the movie 'Blue Hawaii'. Garland also participated in Elvis' Jailhouse Rock concert in Memphis, Tenn. 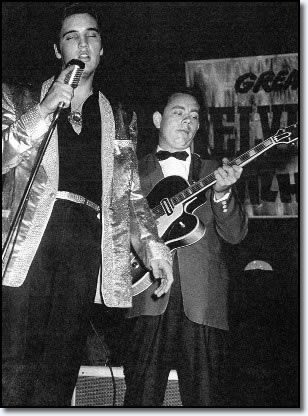 Elvis introduced Garland as 'one of the finest guitar players anywhere in the country', said his younger brother, Billy Garland.

Garland worked with Elvis from 1957 to 1961, and was playing on the soundtrack for the movie 'Follow That Dream' when his 1959 Chevy Nomad station wagon crashed near Springfield, Tenn., throwing Garland from the car and leaving him in a coma for months.

Billy Garland claims it was no accident, but an attempted hit by someone in the Nashville record scene. He has photos showing bullet holes in the car.

He doesn't know who ordered his brother's shock treatments, but they left him with little short-term memory.

'You don't take a man's brains away from him', Billy Garland said.

A hospital report contains the notation: 'He has no memory now. He's retarded'.

Hank Garland had to relearn everything from walking to talking to playing the guitar. He walks with a cane and has other health problems, his brother said.

For the past four decades, Garland, now 73, has lived a quiet existence. A trunk in Billy Garland's home shows the depth and breadth of Hank's meteoric career.

The walls of the home where Garland lives are covered with pictures of him with Nashville's top stars.

One shows him standing beside Patsy Cline as she sings into a microphone. He played on her classics, including Crazy' and 'I Fall to Pieces'.

'I only remember her vaguely', Garland said.

Another photo shows Garland with the Everly Brothers. Garland was featured on the recordings of 'Bye Bye Love' and 'Wake up Little Susie' in 1957. Another shows Roy Orbison and Hank, who worked with him on the hits 'Pretty Woman' and 'Only the Lonely'.

A native of Cowpens, S.C., Garland began playing guitar at age 6 and radio shows at age 12. He was discovered at a Spartanburg, S.C. music store at 14, where he went to buy a guitar string.

Paul Howard, leader of the Arkansas Cotton Pickers, heard Hank's playing and was impressed. He took Garland with him to Nashville, but child labor laws soon put his professional playing days on hold until he was 16.

When returned, he set the country music capital on fire.

He had his first million-selling hit at age 19, with 'Sugar Foot Rag', a legendary country tune.

In 1954, along with his close friend, Billy Byrd, Garland invented a short scale neck guitar for Gibson Guitars. In honor of the two, the guitar was known as the 'Byrdland'.

In 1960, Garland recorded what he claims was the first jazz album ever done in Nashville, 'Jazz Winds from a New Direction'.

Like many artists of the 50s and 60s, Garland receives no royalties from any of the record companies still selling his works. Attempts by his family to collect what they believe is due to him have been unsuccessful.

Garland has filed a federal lawsuit over authorship of the 1957 Christmas classic 'Jingle Bell Rock' in federal court in Jacksonville seeking royalties from the record. Bobby Helms, before his death in 1997, claimed that he and Garland wrote the song but never got credit or royalties because they were under contract as artists and not writers.

Warner/Chappell music company has filed a motion to dismiss the suit claiming that Garland's claims are barred by the statute of limitations.

And for the second time since he quit playing, the family is reviewing a movie script based on Hank's life. It's called 'Crazy', but so far there are no firm deals to make it. A previous movie deal starring Jerry Reed as Hank fell through.

'He was born with talent', said Garland's brother Billy. 'A God-given talent'.