Aug. 16, 1977, forever will be remembered by Elvis fans everywhere as 'the day the music died'. I was studying in New Zealand at the time and was bummed beyond comparison as I took a break from classes that day to mourn the loss of the King of Rock 'n' Roll.

Since then, all we have are memories of Elvis Presley, who had a special place in his heart for Hawaii. I certainly have my share of Elvis memories. I enjoyed every one of his films and television specials, know all the words to his songs (even the obscure ones), and sat in awe watching him perform live in Las Vegas in his prime. As president of my high school student council, I arranged to have a contribution made to the Kui Lee Cancer Fund because Elvis was asking, and I even made the pilgrimage to Graceland before Uncle Tom Moffatt (who brought Elvis to Hawaii) made his first trip there.

As fans worldwide commemorate the 36th anniversary of the King's death this month, not too many can say 'Elvis was in the house!' The Parker sisters, Beth Uale of Hawaii Kai and Sheri Pula of Southern California, share many fond memories of Elvis - like when he came rolling into their driveway in a black limousine one summer afternoon in 1974.

'I was really excited that I ran to Elvis Presley's limo, rolled on his furry floors and I realized I was lying on dark-brown mink', says Sheri. That was the day Elvis gave her mother Leilani an $11,000 full-length mink coat, which Sheri since has inherited. Elvis was known to share his wealth with ordinary people and gave away cars, jewelry and houses to people he trusted. 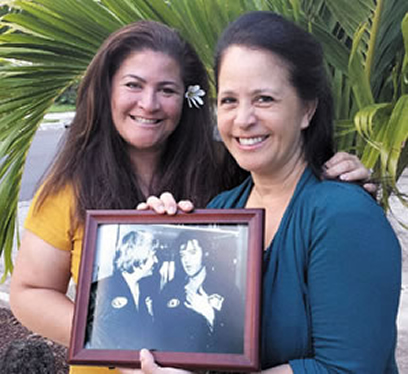 Sheri and Beth with a photo of their dad and Elvis | Photo from Sandra Sagisi.

Sheri and Beth's father is the late Ed Parker Sr., who grew up in Kalihi. Parker was known as the Father of American Kempo Karate and Elvis' martial arts instructor/bodyguard. Says Sheri, 'Dad never considered himself a bodyguard. He always said he was a 'protective companion' and a friend to Elvis'.

When Sheri was just 8 years old and Beth was sweet 16, Elvis visited the Parker family home in Pasadena, Calif. He played their piano, belting out gospel music.

'It was the neatest thing to hear him sing in our large living room with great big panes. I thought the windows were going to break', recalls Sheri of Elvis' powerful singing voice. She remembers sitting on his lap with her younger sister Yvonne. 'Elvis asked if I was a good girl, and when I said yes, he gave me $10', says Sheri, who purchased Tinker Toys and Lincoln Logs with the money.

Their dad, a Kamehameha Schools classmate of Don Ho, wasn't much of a fan of Elvis' music, but he was a fan of 'Elvis, the spiritual giant', as he recounted in his New York top five bestselling book, Inside Elvis. The singing sensation was up all hours of the night, such that he needed his sleep during the day. That's why he wore those dark E.P. (his initials) glasses. Because the two buddies shared the same initials, Ed inherited a couple pair of Elvis' shades. According to Elvis, both bonded because they were 'rebels' - Elvis, a rebel in the rock 'n' roll business; Ed, a rebel in the martial arts industry. The men spent many nights conversing about the eternities and subjects of spiritual nature.

'Dad believed that Elvis had a sixth sense, and he would always call on our father when he felt he needed extra protection', says Beth.

The day Elvis bought Ed Parker a Cadillac Fleetwood, Elvis rode the white, gold trim and top, with gold velvet interior luxury car back to Pasadena with Ed from Las Vegas. It just so happened that they passed the church that Beth and her sister Darlene were attending at 6 a.m. the following morning.

'Dad told Elvis we attended church before we start school every day; he was intrigued and wanted to visit us. We were pulled out of class, and he gave my sister and me a big hug ... when I went back to class, I couldn't even breathe, and nobody believed me that Elvis Presley was outside our classroom until there was a knock at the door', recalls Beth.

It was Elvis, who wanted to know if he could briefly say hi to the class. With Beth's seminary teacher weakening at the knees, shaking like a leaf and the jaws of students dropping to the floor, Elvis addressed the group: 'I want to commend you kids for doing this and getting up so early ... and I believe in Jesus Christ, too. Take care and thanks for letting me interrupt your class'. Because of that experience, nobody missed early morning seminary classes for months in hope that their idol might drop by again. 'The students who slept in that day regret not attending'.

And there was the Disneyland concert experience in Anaheim, when Elvis sent a limousine to fetch the Parker family.

'My recollection of the concert is it was past my bedtime so I fell asleep', says Sheri, who was age 6 at the time.

'After the concert, we all hung out with Elvis at his penthouse, when we met a shy Lisa Marie for the first time. He gave us some of the scarves that he threw out into the audience, he kissed us, and we hung out with him as we saw dozens of screaming fans from a bird's-eye view', adds Beth.

Elvis came one last time to Hawaii in 1977, when he rented a house in Kailua and Beth's dad took her to visit with him. Sheri and Beth say Elvis clearly loved the people of Hawaii. He felt more at home in the Islands, according to them, because local fans, by and large, were 'respectful' of his privacy. In fact, their father often said that Elvis was 'Polynesian at heart'. That's why he enjoyed the company of Ed Parker and his 'ohana. They knew him for who he was and not for what he had. They respected him for more than being a rock star, and knew him as a compassionate and gentle soul.

To the Parker sisters, Elvis will live forever in their thoughts and hearts.