Dominic Joseph Fontana was born on March 15, 1931 in Shreveport, Louisiana. It was in Shreveport that D.J. Fontana started his career - as the staff drummer for the Louisiana Hayride.

In 1954, when Elvis Presley was starting to make inroads in the Mid-South region as an up and coming act to be reckoned with, he and his band, which then included the legendary Scotty Moore on lead guitar, Bill Black on bass and Elvis doing the vocals and playing rhythm acoustic guitar, were knocking out audiences with their signature, seminal acoustic hybrid rockabilly/R&B sound, which, while rocking, did not as yet include drums.

That year Elvis played his first date at the Louisiana Hayride as part of a plan to expand his growing fan base in the South by appealing to a new audience demographic-the country crowd.

It was during that gig he first met D.J. Fontana.

If ever there was a more fateful meeting in the annals of early rock and roll history, it would be hard to top.

As D.J. tells it, he worked at the Hayride with country legends like Johnny Horton, George Jones, Webb Pierce, Hank Snow and early rocker, Dale Hawkins, of 'Susie Q' fame. There wasn't as much call then for drummers on live dates at the Hayride, but D.J. was paid, nevertheless, to sit around backstage until a band needed his services. When Elvis played his debut date at the Hayride, D.J. described how Scottie Moore had seen D.J. hanging around backstage with his drums waiting to gig with whomever, and asked him to sit in with the band. Using a very bare-bones drum kit, D.J. sat behind a curtain, unseen by the audience, and played behind Elvis and the boys as they performed the two songs allotted them, which were 'That's Alright Mama', and possibly (D.J.'s memory was a little sketchy) 'Blue Moon of Kentucky'.

More than one legend was created that night. Horace Logan, who was the emcee for that particular show (and for hundreds of shows at the Hayride), is also the man most observers credit with coming up with the deathless phrase, 'Elvis has left the building', when he did so that very evening.

Do you remember the first time you saw Elvis at the Hayride?

That's how it started: I just happened to be there.

The first recording session you did with them was in Nashville in January 1956.

Do you have any memories of that session?

We did that B it was not at RCA, it was a little church. Tho only thing I remember is that they were trying to get that echo sound. They'd run some mikes down the hallways. They wanted to have the same sound that he had with Sam, but they never did get it. But it was a good sound.

During concerts in '56 'Blue Suede Shoes' was performed with a long drum solo. Was that your idea?

Yeah, it's on a tape somewhere. But I don't know, we never did play solos for drums. I think he must've turned around and said: 'Play!'. Whenever he'd point at you, you'd play.

But I heard that tape and it seems to me like it was done in Vegas, wasn't it?

(Scotty:) It was. We didn't know it was recorded. That's another thing we're trying to sue them for. 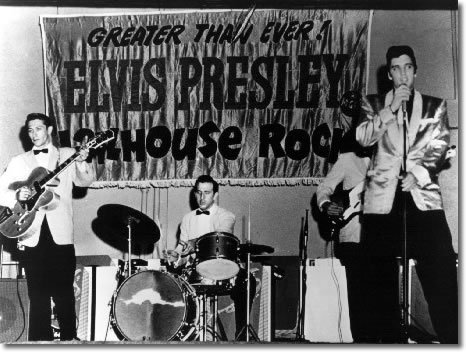 Oh, is this a sensitive subject?

No, no. They're working on it.

(Scotty:) It's definitely us playing, but we don't remember doing it.

Getting back to the drumsolo, do you mean that it was not a regular part of the act?

It was just a one-off. When he'd point at you, you'd do something! (laughs) He was good at that!

Where did you get the idea for those machinegun-like drumfills in 'Hound Dog'?

We took that from a band we saw in Vegas, Freddie Bell and the Bellboys. They were doing the song kinda like that. We went out there every night to watch them. He'd say: 'Let's go watch that band. It's a good band!. That's where he heard 'Hound Dog', and shortly thereafter he said: 'Let's try that song'.

He was always trying things.

On early live-versions he sang: 'You ain't nothing but a Hound Dog, Hound Dog'

I've read that the concerts in Canada in '57 were pretty wild.

Canadian football stadiums are a lot bigger and longer than ours. Ours are 100 yards, and theirs are 125 B 150 yards. The fans couldn't see or hear us. They came closer to the stage to hear us. There was a fence, where they'd sit down. The people who owned the stadium got nervous and scared: 'Oh God, they're gonna ruin the floor!'. But what about those big football players ruining the grass? They told everybody to get off the grass. But what are you going to do with 20.000 people? Kill them all? You can't do that. So Elvis came on, did a few songs, and said: 'We'd like for you to get back in your seats'. Which they did, very orderly. Until the last song, and here they come again B yeah, they came! Elvis left the stage, and here we were with 20.000 people! (laughs) The stage turned over, but we finally got all the equipment in the car, which was right behind the stage. The car was surrounded by kids, and they were shaking the car.

George Klein, who sat behind the steering wheel, said: 'I'm gonna run over them!'. I said: 'George, you can't run over these kids!' (laughs). 'But they're gonna kill us'. 'No, they won't. Turn those lights on, then they'll see he's not here, and they'll go their way'. Which they did. They weren't out to hurt anybody.

It's been said that Elvis announced 'Fool's Hall Of Fame' as his new single. Does that ring a bell?

We tried that tune, I guess half a dozen times. I don't remember if we ever got a good cut.

We tried it. On stage it was great. I think he finally cut it.

You tried it in the studio?

Yeah, but there was something about it, It was just one of those songs that you can't get a feel on. I think they finally cut it, but it was a throwaway song, and that's why it was never released. It'll probably come up, somebody will find it and release it. RCA or somebody and then we'll sue them again! (laughs)

You have toured with Gene Vincent and the Blue Caps. What was that like?

Yeah, that was fun. Gene was really a good artist. He was a little crazy sometimes, and also his band, but it was fun working with him. Gene was the wildest one of the bunch. He wasn't exactly calm. He'd get mad at people out in the audience. One time in the Northwest, the audience was filled with lumberjacks, guys with big arms and big necks from cuttin' trees down. And Gene would go: 'Hey you, guys, meet me behind this thing, and me and my band will whoop ya!' (laughs). And I'd go: 'No, no, don't tell them that, Gene!'.

He'd always wanna fight the biggest guy in the place.

Was he suicidal or something?

I think so. No, I think he knew they wouldn't hit him, because he had a cast.

He was cripple. Nobody's gonna hit a cripple, but they would hit us!

Back to Elvis B On many sessions in the 60's Elvis used two drummers, mostly you and Buddy Harman or Hal Blaine. Why was that?

One guy couldn't play all the garbage they wanted you to play. On the Hawaiian tunes they had bongo's, congo's, you had this, you had that. That's why they hired all these guys.

No, he was with another band. I saw that picture. They'd have a show with jogglers, dog-acts and all kinds of variety that the Colonel hired. They had this band to back all these acts up, and that explains the photo.

Jumping a few years ahead to the '68 NBC special, did Elvis call you personally?

No, he never called anybody. I talked to him once on the telephone! They always had somebody calling, but then you'd know it was coming from him.

Was that the last time you saw him?

I saw him a couple of times after that, went down to the house to talk to him

How do you look back on your years with Elvis?

Oh, it was fun. We really had a good time. But when you think about itY.worked with a guy forty years ago, and I'm still working today doing the same.

Does that surprise you, twenty years after his death?

Yeah, sure does! Still making a pretty good living doing this. After forty yearsYyou can't hold a day-job that long. They fire you after about twenty years.

(Scotty:) It sure beats picking cotton!