Father and Daughter Together Again 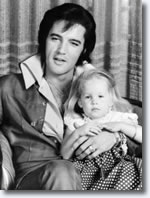 It's been said that it doesn't matter who your parents were - it matters who you remember they were.

Elvis Presley died 30 years ago today when his only child, Lisa Marie Presley, was 9 years old, leaving her with memories of a loving, but troubled father.

This week, as tens of thousands of people make a pilgrimage to Graceland, Lisa Marie is making new musical memories with the help of her father in a virtual video duet of his 1969 song In the Ghetto.

Lisa Marie remembers a dad who used to sing her lullabies, even in the wee hours of the morning.

'Oh yeah, he'd always wake me up to sing in the middle of the night, get on the table and sing', she told Diane Sawyer, in an exclusive interview on 'Good Morning America'. 'I remember him as my dad, but he was a very exciting dad'.

Were Elvis alive today, he would be 72 years old - something that might be difficult for his fans to contemplate, but not his daughter.

But returning to Graceland, the family's famous Memphis, Tenn., home, is filled with mixed emotions for Lisa Marie.

While millions of tourists have tramped through parts of Graceland over the years, the upstairs part of the house has always remained private - and almost exactly as it was when Elvis died.

'It's hard. It's also really comforting', she said. 'I don't know if anyone has, you know, the place that they were raised, you know, held in a capsule like this. It's not often that you have that'.

In a building off the main house is an archive of Elvis and his family's life - his wallet with pictures of Lisa Marie, a child's snowy-white fake fur coat (he gave her a real one, which her mother made him take back) and a blue scarf with a handwritten message to Lisa Marie that she had never even seen before.

Even as a toddler, Lisa Marie knew something was wrong with her father.

'And I think that he was in trouble. He was not happy. He was, you know, obviously crying out for help', she told Sawyer.

Everyone now knows about Elvis' painful decline - the prescription pills, the sleepless nights, the feeling of being haunted. But as a little girl, Lisa Marie said her father's behavior could be confusing and frightening.

'If I was watching TV in my room, he'd come to my room and sort of stumble to my doorway and start to fall, and I had to go catch him. You know, things like that. And he'd try to pull himself out of it if he saw me, things like that', Lisa Marie recalled.

And she would say to him, 'Don't die. Are you going to die?'

Then he did die. Elvis collapsed of a heart attack at Graceland on Aug. 16, 1977, and Lisa Marie saw the paramedics rush his body away.

She said she 'couldn't really process what was happening'.

She remembered the day of the public viewing of Elvis' body.

'I did a lot of strange things that day, because it didn't really settle in', she said. 'I rode my golf cart. I ran around and smoked cigarettes at 9, in the guard shack somewhere. I was crazy. I don't know, I did, like, wacky things'.

Now Lisa Marie wants her own tribute to her dad.

To memorialize his songs and his passion, a new video of Lisa Marie singing In the Ghetto, accompanied by her father, has been posted Friday on the Elvis Australia website, and on iTunes. The video also include's images of Elvis.

Never forgetting his roots, Elvis would eventually build Presley Place, a shelter for Memphis-area families in crisis, where they can get job and life skills training.

In the Ghetto was a pioneering song at that time - the very word 'ghetto' was a new one for America.

Lisa Marie said she thought about using many other songs for the duet, but this is the one that spoke to her the most.

'It's got a pretty strong message', she said. 'There may be a little bit of a reaction to the content'.

Lisa Marie had a strong reaction while recording the song, at one point breaking out in tears.

'I got more emotional during that recording than I've ever gotten', she said.

When her mother, Priscilla Presley, heard the song, 'she lost it', Lisa Marie said.

'She was shocked', Lisa Marie said. 'I guess she saw there was something special about it'.

Lights On at Graceland

Elvis' daughter would grow up into a walking reminder of her father's smile, his eyes and his daring.

Lisa Marie has worked hard to build her own music career. She released her debut album, To Whom It May Concern, in 2003, which included a song called Lights Out about death and loss at Graceland.

Today she sees her father emerging in her own two children, Ben 14, and Riley, 18.

'They both have traits. My son has got this very regal thing about him. He's just got this dynamic energy that is familiar. - And then my daughter just, the humor, you know. She's got the intelligence, and she's smart, although I find her more like my mother than I do him'.

Wednesday night, the eve of Elvis' death, Lisa Marie paid another tribute to her late father. She went upstairs to his room at Graceland and turned on the light in his window.

'That was something that hasn't been done before but I thought it would be cool to do this anniversary', she said.

It was a salute across 30 years from a woman who lived through the darkness of her father's death. A woman who, as a little girl, wrote down three wishes she had:

'If I had three wishes, I would wish I could drive a Volkswagen. I wish I had 100 astropops. I wish my mother and father don't die'.