She's the daughter of music's biggest icon, a singer-songwriter in her own right, a mother of two and the head of one of the world's biggest tourist attractions. Lisa Marie Presley is also very outspoken. On the week of the 30th anniversary of Elvis Presley's death -- which she commemorated by filming a duet of 'In the Ghetto' -- she shared with Spinner her candid opinions on the commercialization of his music, her distaste for young Hollywood and why she doesn't need fans to remind her how wonderful her dad was.

Tell us about the making of the 'In the Ghetto' video.

I wanted to use this anniversary for something really good. So first I picked the song. David Foster produced it. I called him last minute and he had four hours to lay a track down of mine on the original version -- and that turned out really good. And when it came to the video, I wanted Tony Kaye ('American History X') to direct. He's controversial; he's cool. He was in New Orleans filming a movie, and he had just a few hours. So I flew to New Orleans.

And this video is not only for the 30th anniversary, it's also for a good cause.

All of this -- the song, the video -- is going to charity. The money from the downloads is going to help build another Presley Place in New Orleans, which is a transitional housing program that we started in Memphis. Families come in and live there, get their life skills and get it together. They get jobs ... and then about a year later, they move out when they can get back on their feet. This program has been doing incredibly well for the past few years, so I wanted to branch it out. It's something [Elvis] was very interested in, because it's kinda where he started from. And Presley Place is near where he was raised. I wanted to do this [video] and use it for something good. All fingers pointed towards New Orleans. I landed there to do the video and I looked around when I got off the plane, and it looks like Katrina happened six months ago. That's when it all fell together. And all proceeds -- not a portion of -- all proceeds are going towards building a transitional housing building in New Orleans. 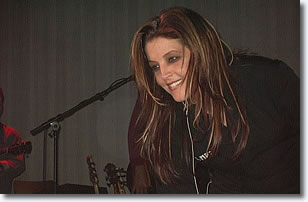 Did you find filming the video to be an emotional experience, being that you're singing with your dad in a setting that's still suffering the effects of Katrina?

The next morning, I heard the rough [recording], and just lost it when I heard it. And I've never cried when I've done anything -- ever. So I know it's good. It's pretty organic. There are no bells and whistles -- they just added me into the original recording.

What personality traits do you think you inherited from your dad versus those from your mom [Priscilla]?

Both are really strong. Humor from him, without question. Common sense and strength comes from her. I'm not saying that he didn't have any -- I'm just saying that she thinks everything through.

What did your dad teach you about being a parent?

He was on the road all the time, so I don't know! But I had unconditional love.

Describe a typical day at Graceland when you would visit as a child.

I got on his schedule. He was nocturnal, so I'd sleep all day and be up all night. And sometimes I'd wake up way before he would, and it was just mayhem with me and my friends. We were pretty unsupervised -- running pretty wild, riding golf carts -- just crazy kid stuff.

What song of your dad's do you listen to when you need a good cry?

There isn't a specific one. If it's one of those evenings when I'm with a bunch of people and we're sitting around drinking and turn [his music] on, there's a possibility that I'll lose it. I can't name which particular song would do that, and it certainly doesn't happen very often. I tend to listen to more of the '70s material, because that was what I was around for. 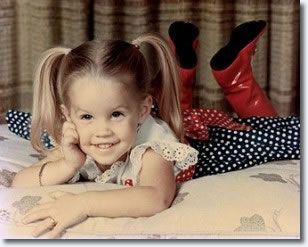 I read that a CNN poll in the last few years reported that 45 percent of Americans today consider themselves Elvis fans. And thousands of people flock to Memphis every August to pay tribute -- even after 30 years. Do you ever get overwhelmed by your dad's popularity?

I don't get overwhelmed. I get concerned because our priorities today are so screwed up, and we don't really nurture culture or tradition in our country. I don't want people to forget the fact that he started this whole thing, and that it was not this way [before]. It's important that people know. I know that the parents are fans -- what does our youth think? I don't know if they think Madonna started music or Jay-Z . Where did it come from? Who started all this? Where did it begin? That concerns me.

The celebrity world then versus the celebrity world now is certainly very different. And you've been pretty vocal about your distaste for this new world of reality television and tabloid-fueled Hollywood. What bugs you the most about celebrity culture today?

Morals. Our young girls are looking up to things that are really bad for them to be looking up to. And we glorify bad behavior in the press. When I was growing up, you would hide that for dear life. Whatever you were going through, you would avoid the media. You didn't want them to see your mistakes. You wouldn't advertise it and have all the paparazzi and major Internet servers on your speed dial. I avoid it at all costs, and I still do. Now, it's just a free for all. I'm concerned for our youth, because we glorify it and give it so much attention. Our young girls are going to be getting DUI's and have drug problems, bulimia, anorexia and show body parts to become famous.

Now that your own daughter [18-year-old Riley Keogh] has started modeling and is becoming a celebrity herself, what are you doing to keep her grounded and out of trouble?

I don't have to do a lot. She sees it for what it is. I'm very lucky in that she's very level-headed. She's deep. And she hates all that stuff, as well. She's got a good B.S. detector. She's never been that kind of dumb girly-girl. I don't worry about her.

How do you feel when you see some of your dad's songs commercialized -- like the current 'Viva Viagra' commercial?

I find that revolting. Some songs we have no control over. I know we didn't license that one.

Being that your ex-husband Michael Jackson owns the rights to a lot of the Elvis Presley catalog, do you ever have the inclination to call him up and ask him to stop the commercialization of these songs?

I don't know if he owns that one [laughs]. But have I thought about it? Yeah. I get mad all the time. If I see something wacked out, I'll definitely yell and say, 'What the hell is that?' or 'Get rid of this!'

Can we expect a new album from you anytime soon?

Yes. I'm definitely going to do it. I just have to figure out the right way. I'm on a clean slate right now; I just got off my label, so I'm figuring out my next route.

Who are some other female rockers today that you admire?

Today? That's tough. There are no female rockers anymore! I can tell you all the ones who've inspired me in my lifetime but not today. I don't think there's a place for rock females.

With the exception of the video you're doing this week, you've been reluctant to cover any of your dad's tunes, choosing instead to make a name for yourself as an artist on your own and writing your own songs. Do you ever see yourself covering an Elvis song on a future album?

I could've done this ages ago. I always find it necessary to make my own path and not ride on his coattails, which I have not done. And the only reason I was OK with doing this [video] is because I've already done a couple of records. People already know who I am on my own. I'm not doing this in a self-centered way. I'm doing this for a bigger cause. The answer is, most likely, no.

In regard to your own career, how does your last name help you and how does it hurt you?

Any name will help you get in the door, but it doesn't mean you're going to stay in the house. Right now, I'm so baffled at how anybody can be famous for anything. I don't try to use it. I've never tried to use it. I know people are into branding themselves, and that's all a new thing and that's fine. It used to be that the name would help you, and if you had talent, you'd go far. And if you didn't, you wouldn't. Nowadays, you can go far with nothing. I don't quite understand that.

What are some of the biggest challenges of owning and running Graceland?

Graceland itself is mine. Eighty-five percent of the company was sold a couple of years ago, and the money that was paid for that went back into the company that we formed. It's a very complicated ordeal. Basically, all the money went into stock and into doing bigger things with the estate -- with the licensing, marketing and stuff like that. My mom is on the board and everybody works together. 'American Idol' is involved. There's a misconception that I sold the company, which is ridiculous. The money went back into the company, actually -- into the new, bigger company. The whole thing is a very intense running machine.

Do you see it staying in the family?

Yeah, everyone who was there before is still there. My mom is very present on the day-to-day stuff. Everything is working pretty well.

Since his passing, is there anything that you've learned from fans about your dad? I can imagine you are constantly approached by people who tell you how much your dad meant to them.

That's definitely true, but I already knew. I know what he was without having them tell me.