Joan Deary was executive in charge of the Elvis' catalog for RCA records. Deary joined RCA in 1954 as Steve Sholes secretary. In 1972 she became assistant to RCA vice president Harry Jenkins, whose job it was to handle the Elvis Presley material. She produced many albums for RCA, including the Elvis Aron Presley 25th Anniversary Album set. Deary worked out of the rca building in hollywood until her retirement in 1987.

Before Ernst Jorgensen there was Joan Deary. During Elvis' lifetime, RCA gave him many of his original acetates which he promptly stored at Graceland. After his death, Joan needed those acetates to see what materials was on them that she could use. The Colonel told her to go to Graceland and look around. Joan searched through the depths of closets, drawers and shelves. She found about a dozen original acetates including 'The Million Dollar Quartet'. Joan wasn't bothered by bootlegs, but was always concerned that it wasn't the best of Elvis.

A little known fact is Joan herself recorded the Aloha Special in Hawaii. She was given a room the size of a closet and boxes to sit on. From her 'closet' she couldn't see Elvis, but could only hear him. She sat on a box with the RCA recording equipment also on boxes. and recorded the now famous 'Aloha from Hawaii'.

Joan produced the original LP, Our Memories Of Elvis that has just been released by Follow That Dream. 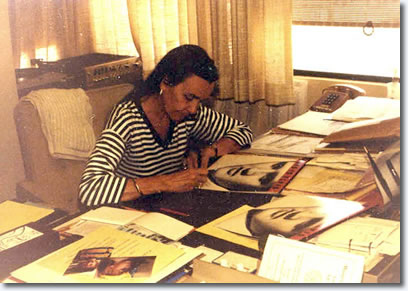 In 1955 two people joined the RCA Records payroll and began a relationship that is still paying dividends 30 years later. One was a secretary in the artists and repertoire division in New York, Joan Deary. The other was a young singer whose early recorded music Deary didn't particularly like - she couldn't understand the words - but whom she considered a 'very natural kid with a great sense of humor'. It was Elvis Presley.

Today Deary is a kind of high priestess of Presleybilia, overseeing RCA's release of posthumous Elvis material, which seems certain to exceed eventually even the 250 million records he sold before his death in 1977. 'People will never get tired of Elvis' music', says Deary, whose latest contribution to the Presley bin is a priceless cache of master tapes and records that she found casually stored in Graceland, his home in Memphis. The material, including tapes of offstage conversations and live performances, is part of RCA's new six-LP Golden Celebration set, which marks Elvis' 50th birthday in January.

Deary discovered the treasure trove during a 1983 trip to Graceland after RCA and Col. Tom Parker, Elvis' longtime manager-mentor, struck a multimillion dollar deal for rights to old and previously unreleased material. Deary, whose official title is producer but whose de facto job is Presley curator, called Parker and arranged to search the house. 'It was a nervy thing to do', she says, 'but I thought I might be able to recognize something that might not look valuable to another person'. So in mid-1983, after the last tour group had taken its last Instamatic picture, Deary began a five-hour search of Graceland's closets, drawers and shelves. She eventually turned up a bonanza that included 29 reels of tape. 'Some were in boxes, some were loose, and some more in pieces that we had to splice together', recalls Deary, who carried the tapes back to L.A. in a tote bag. 'I never let them out of my sight during the flight.' Once home she headed straight for RCA's Hollywood vault. Still she didn't know what she had - 'They could have been nothing' - until she sat down to listen to the hours of recordings left after duplicates and unrelated materials had been returned to Presley's estate.

Among her discoveries were taped monologues and the earliest known recordings of Elvis singing Danny Boy and Earth Angel. There was also a tape from his triumphant 1956 homecoming concert in Tupelo, Miss., but it had apparently been recorded on a battery-driven machine that was on the blink. 'The speed varied up and down - and not just slightly', says Deary. 'At points it almost came to a standstill, and then it would speed up ...

With recording engineer Dick Bogert, she spent six weeks painstakingly rerecording the tape. It's still only a rough recording, and a little rough-sounding, but to Presley fans it's practically the Holy Grail. While Deary says the Graceland treasure is still far from exhausted, she won't reveal what else she found. She acknowledges that some fans accuse RCA of milking the Elvis legacy by recycling his old material and letting out new findings in dribs and drabs. And Deary, who is in her 50s (she won't reveal her age), admits there's enough material to last her lifetime. But she defends RCA's policy. 'I won't just take 10 unreleased and unrelated songs and slap them together just to have a release', she says. 'It has to have a valid artistic concept'.

Deary was a recent widow with two young sons when she began working at RCA. She quickly overcame her indifference to Elvis' music. He often came by her office, she says. 'He was very polite. Everything was 'Sir' or 'Ma'am'. I don't think he realized the extent of his success. He knew people screamed and yelled, but he didn't know why'. Deary became increasingly knowledgeable about Elvis' recording career by scrutinizing the hundreds of hours of tape run during his sessions. 'Almost from the very beginning', she says, 'Elvis knew what he wanted. He pretty much ran the sessions himself in a quiet way. He didn't throw orders around. People would hit clinkers, and he never lost his temper. He knew his lyrics, he knew what he wanted, and he was willing to stand there until he got it. Sometimes, while readying a record for release, he would suggest a different mix or something. He liked to have his voice a part of the group sound. It was funny. He didn't like to have it out front. Of course I felt his voice should be out front - because that's what people were buying'.

RCA was stockpiling its Elvis material all along, of course, but it was only after he died that 'we really began going through what we had on a systematic basis.' After the 1983 deal, Parker, with whom Deary says she's had an 'up-and-down relationship over the years', stopped by the RCA office with a stack of about 300 tapes.

Deary also handles communications from fans who say they have unusual recordings. Usually the leads are false, but she always checks them out: 'I can't afford not to.' On five occasions Deary acquired over-the-transom tapes of Presley that turned out to be legitimate - including Elvis' first Las Vegas performance.

In her Hollywood office, which is jammed with Elvis memorabilia (she says she has a couple of souvenirs 'too personal to talk about'), Deary also takes calls from fans who just want to talk. 'I have to keep in touch with what they want and how they feel', she says. 'And I feel like they have got to have a place to go. Who else is available? They have lost Elvis, and I guess I am like a symbol of his music'.