Lamar Fike was one of Elvis Presley's career-long entourage who became the singer's friends, foils, bodyguards, road managers, lighting technicians, punchbags. Or, as Fike put it, 'his buffer zone'.

The group of men, and one woman, became known as 'The Memphis Mafia', not least because of their black mohair suits, sunglasses at night and black limos. The term stuck and was generally used, including by Elvis and themselves, with considerable irony. Elvis considered his 'mafia' as his extended family and there is a school of thought that he kept such old friends around him to protect him from the advances of the real mob, particularly during his Las Vegas years, when he was said to have received offers that must have been difficult to refuse.

Lamar Fike was born in 1935 in Cleveland, Mississippi, by the side of Route 61, which runs north-south through the entire country, including past the Duluth birthplace of Bob Dylan, who preferred to call it Highway 61. Fike spent much of his boyhood in the small town of Mart, Texas, close to Waco, before his family moved, as Elvis' did, to Memphis, Tennessee, to seek work when he was a teenager. After attending the Columbia Military Academy in Tennessee, graduating in 1954, Fike bumped into the young Elvis in Memphis before the latter burst onto the scene, and joined his entourage in 1957, by which time Elvis was already the hottest property in pop music.

There is some confusion about how Elvis and Lamar had their first contact. According to one report, Lamar first met Elvis by just hanging around the front of his house at 1034 Audubon Drive in Memphis until he was finally invited in. Elvis lived there from May 1956 to March 1957. However, it is likely that Elvis and Lamar first met in 1954 at Sun Studios. Nineteen-year-old Fike was learning how to be a disc-jockey under the tutelage of George Klein, a classmate of Elvis’ and one of his friends. Klein and Sam Phillips introduced Lamar to Elvis

With the exception of Klein and Red West, another of Elvis’ friends from high school, Lamar Fike knew Elvis the longest. Klein never lived at Graceland or worked for Elvis, but he remained a lifetime friend. West was a year behind Elvis in high school, stayed friends with him after that, and become part of the earliest Memphis Mafia in 1960, as did Lamar Fike. 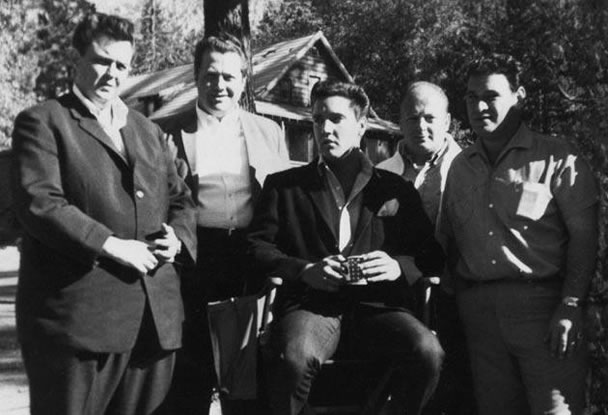 Lamar Fike on the set of 'Kid Galahad' with Elvis Presley, 1962.

Fike began working for him for no pay – Elvis preferred to tip his entourage with flash cars or houses for their parents. Fike remained one of his closest aides until the singer's death in 1977. He first got to know him through Elvis' mother, Gladys, and it was she who told her son to trust their fellow Mississippian before she died in 1958, just as Elvis was conquering the world. Fike became an intimate member of the Memphis Mafia, whose relationship to Presley was described by one writer as 'like a football scrum after a loose ball'. Mutual friends say it was more to protect Presley than to make money from him that Fike volunteered for the US army when the singer was called up in 1958. Fike was turned down because of his weight (the reason the singer nicknamed him 'Buddha'), but he followed Presley to Germany. The singer, while still being paid the standard GI pay of $78 a week, was allowed to live off-base with his father, grandmother, Fike and another member of the Memphis Mafia, Red West.

It was Fike who introduced the rock'n'roll star to a 14-year-old girl called Priscilla Beaulieu, the singer's future wife and mother of his child, Lisa Marie Presley. Fike always insisted that Priscilla's father cornered Elvis into marrying Priscilla. 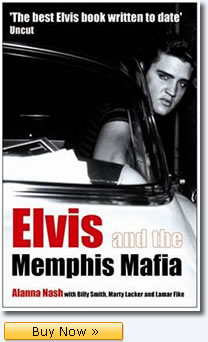 'When I found out their relationship was more than just necking, I was afraid we were all going to prison without a trial', Fike recalled. 'Elvis told me he had the whole thing in control. I said, 'I hope you do, otherwise they'll ship us home in a goddam cage!'

It was Fike, too, who had introduced Presley to a girl called Anita Wood, whom the singer dated for five years until 1958 and who Elvis' mother hoped would be her daughter-in-law. When Elvis and Wood were photographed kissing passionately before he left for Germany, Fike, and most of the world, assumed Wood would eventually become Mrs Presley. According to Fike and Wood, however, Elvis' manager, Tom Parker, 'the Colonel', who preferred to keep his client as the world's most eligible bachelor, managed to edge Wood out of Elvis' life.

Fike recalled the 19-year-old Wood's first date with Elvis, when she had to share the singer's limo with Fike and two other members of the Memphis Mafia, stopping off to buy 'dozens of hamburgers' before going to Presley's newly-bought Memphis Mansion, Graceland, where he showed her what she called 'the biggest bed I have ever seen'. What Fike described as Elvis' 'lure' did not work that night and, according to Wood, he behaved 'like a true southern gentleman' and drove her home. The 'lure', according to Fike, worked next time around and Elvis and Wood became lovers. Asked why Elvis did not marry Wood, Fike, though never a great fan of Tom Parker, said simply: 'the Atlantic Ocean' – a reference to Elvis' service in Germany.

Among Fike's recollections was the actress Natalie Wood drinking with Elvis in his penthouse at the Beverly Wilshire hotel in Los Angeles. 'She got upset at Elvis for not paying attention to her... so she opened the window and sat on the ledge. I told Elvis she was going to jump and he said, 'no she won't. She just wants attention'. We finally talked her back in'.

Fike's physical bulk led to his description as 'larger-than-life' in various of the countless books on Presley. During what Elvis purists believe were the pathetic years of his decline, the singer was wont to invite Fike onstage to give him the kind of 'piggyback' a father gives his child. Fike's tales were a mainstay of the controversial 1981 book Elvis by Albert Goldman. More recently, Fike himself published Elvis and the Memphis Mafia (2005) and, helped by the writer Mark Bego, his own memoirs of life with Elvis, titled An Uncommon Journey (2008).

One of Fike's most revealing interviews was with the presenter Larry King, who asked him what Elvis was like to work with. 'At times very difficult, but most of the time he was a lot of fun', Fike told him. 'When he got hard-nosed, you knew he was there. He could make it hard on you. My thing was we just fought all the time. And I always lost. I got fired about 500 times, but it's all part of it.

'He treated everybody equal. It was essentially, you know, like I think God loves a buzzard as much as an eagle. That was a great lesson to us. If Elvis Presley can treat a guy that sweeps the streets the same way he treated a corporate CEO and was nice to him, so could we. He was the most unprejudiced human being I ever knew. Totally colour-blind'.

Elvis and The Memphis Mafia