Lisa Marie Presley performed her duet of 'In The Ghetto' live on the Oprah Winfrey show season premiere yesterday. With Lisa was her 18-year-old daughter Riley. After the performance, Lisa Marie and her daughter Riley (who gives her first TV interview) were interviewed by Oprah. Lisa Marie performed 'In the Ghetto' with the Harlem Gospel Choir and vintage footage of her father, Elvis Presley. Possibly because of negative comments on the original clips use of images of baby's with guns in this performance the guns are gone. 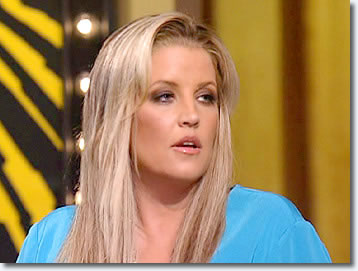 Lisa Marie says that she picked the song, which she recorded with her father to raise funds for charity, very carefully. 'I felt that it had a lot to say and it made a great point. I've been asked for years to do a song with him, by his fans, so it made a lot of sense to do that one', Contactmusic quoted her as saying.

A part of proceeds from the sales of the song will be used to support the ongoing New Orleans, Louisiana relief effort, which became clear shortly after Lisa Marie had picked the song. 'I ended up going to New Orleans because the director I wanted was in New Orleans... and as I was going from the airport to go shoot the video, I'm looking at all this abandoned, desolate... place that I was thinking was being repaired', she said.

Lisa Marie admitted that she found working on the two-hour recording session very tough. She even went on to say that the recording session brought her to tears. 'I don't sing as well as he does... I don't usually get emotional (about this)... so I knew that was something special, that moment', she said.

In her first ever television interview, Riley, Lisa Marie's daughter, says that Elvis was not made into 'this huge thing' by her family, but rather was shown to her in photo albums like a normal grandfather. So despite being the granddaughter of a legend, Riley says it was not hard for her to define her individuality.

At 18 years old, Riley is already in the midst of a successful modeling career. Ultimately, Riley says her career aspiration is to become a photographer. Instead of flaunting the family name, Lisa Marie is proud her daughter is earning money for herself. 'I didn't want her to have that shadow where she felt competition and intimidated by anything', Lisa Marie says. 'I wanted [my children] to be able to do what they wanted to do'. 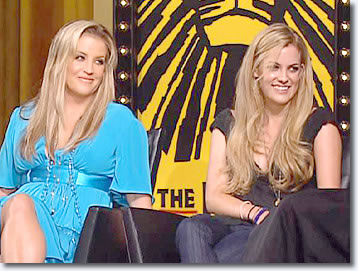 Lisa Marie Presley, 39, attended the Anna Sui 2008 spring/summer show at Fashion Week in New York on Monday, September 10. Attending the show with Lisa were her 18-year-old daughter, Riley Keough, and husband, Michael Lockwood. Lisa is the daughter of Priscilla Presley and the late Elvis Presley.