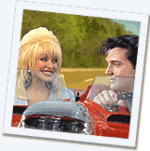 Dolly Parton knocked back advances from Elvis Presley's people to record one of her most famous songs, I Will Always Love You.

Dolly turned down the tempting offer after discovering that she would have to sign over half of the publishing rights for the song.

The big-hearted little lady from Smoky Mountain, Tennessee stood up to Presley's management and put the welfare of her family ahead of fame and fortune with Elvis.

She remembered: 'Elvis loved I Will Always Love You and wanted to record it. I got the word that he was going to record it and I was so excited'.

But her dream date with Elvis was abruptly cancelled after Presley's formidable manager, 'Colonel' Tom Parker demanded that she sign over 50pc of the publishing royalties to them.

Said Dolly: 'I was really quiet. I said, 'well, now it's already been a hit (for me). I wrote it and I've already published it. And this is the stuff I'm leaving for my family, when I'm dead and gone.

'That money goes in for stuff for my brothers and sisters and nieces and nephews. So I can't give up half the publishing'. And he said, 'well then, we can't record it'.

More than 30 years later, Dolly's mixture of emotions about what could have been, is always on her mind.

'But I always wondered what it would sound like. I know he'd kill it. But anyway, so he didn't. Then, when Whitney (Houston's version) came out, I made enough money to buy Graceland!' she laughed.

Dolly's decision to retain complete ownership of that song turned out to be one the wisest moves she ever made.

She has enjoyed major chart success with it three times, while Houston's version is the biggest selling single of all time by a female artist - earning Parton more than $$6m.

In a strange twist of fate, Ulster audiences may be set to hear what a Parton/Presley duet of I Will Always Love You sounds like. For Dolly sang the song with an Elvis impersonator at a London gig last week!