Elvis Presley was a Cadillac man and everybody knew it.

His taste in cars was especially well-known in his hometown, where folks believed that if you were in the right place at the right time he might suddenly appear out of nowhere and give you the car of your dreams, because that was one of the splendid things about him: He got a kick out of giving away automobiles.

Ernie also talks about when Elvis rented out his Thunderbird Lounge in 1967 and 1968 for New Year's Eve.

Whenever it happened, the lucky person not only wound up with a snazzy new set of wheels, he (she) became part of a legend that even then was growing larger than life - so large, in fact, that one day crowds from all over the world would make pilgrimages to his home to see where he'd lived and which cars he'd kept for himself, including the 1955 pink Cadillac that's so famous it's on T-shirts and coffee cups.

While most Elvis fans knew he was a Cadillac man, what many didn't know is how close he came to being a Ford guy. Nor did they know what happened to the car that might have changed The King's image, ...

... had things taken a different turn.

The man with the answers to such questions of Americana is 66-year-old Ernie Barrasso, who notes that this is the 40th anniversary of the story of Elvis and the Ford that did not quite make it to hall of fame at Graceland.

There are a lot of Elvis stories in this town - everyone from his cook to his haberdasher has a tale to tell - but I know of no other quite like this one. The story begins Nov. 17, 1961, when Barrasso was working as a car salesman in Memphis. 'When I came home from the Army, I needed a job', he said, 'and I called my uncle, Frank Liberto, who was sales manager at Hull-Dobbs Ford. I asked if he could use me and he said, 'I don't know, can you sell cars?' At the time, Barrasso himself didn't know. When he came out of the Army he had no business training. But he was a friend of Elvis Presley's and that turned out to be better than experience.

'Elvis and I grew up in the same blue-collar neighborhood', Barrasso said, 'and although we went to different schools, we knew one another. I thought he was a little on the freaky side because of his long hair and the way he dressed. But he was always a nice person and we got along'.

Barrasso still remembers the day the Ford Thunderbird convertible was delivered to Memphis. 'They made only 200 of these particular cars and we got one of them because we were such a large dealership. It was a unique car - red with a black interior and a movable steering column that broke to the right.

A friend of mine saw it and said, 'I'll bet Elvis would buy that car'.

Barrasso made three trips to Graceland to tell Elvis about the sporty-looking Thunderbird. 'One Sunday, I left a brochure and the next day he drove down in his Cadillac and asked to see the car, which was on the showroom floor. The wire wheels caught his eye immediately.

As I was showing him the breakaway steering wheel, he asked how much?

Barrasso froze. 'It meant a $415 commission, the biggest I'd ever made'.

Elvis wanted the car in 15 minutes and a crowd gathered while they got it ready.

Liberto called the newspaper and a photographer came running and photographed Elvis sitting in the driver's seat. Barrasso is standing next to the car wearing a coat, tie and big grin. When Elvis drove off in the Thunderbird, he said, 'I'll send somebody to pick up the Cadillac'. 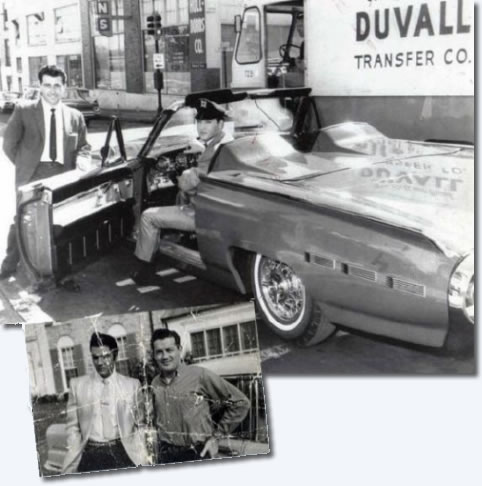 The picture ran in the old Memphis Press-Scimitar newsp1.per and Barrasso got a copy and had it blown up like a poster. Today, it hangs on the wall of his office in his bachelor's home in East Memphis. Next to it is a copy of the bill of sale, also enlarged, showing that Elvis paid $6,284 for the 1962 8-cylinder sport roadster T-bird.

Barrasso has looked at the photograph almost every day for 40 years and has never tired of it. 'Selling that car was the thrill of my life but it turned out to be an unhappy experience for Elvis'.

A couple of days after the sale, Elvis flew to Hollywood to make a movie. Two employees were assigned to drive the car out. Along the way they discovered some of the wires on the fancy wire wheel covers had come loose and were knocking against the car. They needed replacing, but the company that made them had gone out of business. So, plain ordinary wheels were substituted.

When Elvis saw that the spiffy wire wheels were missing and couldn't be replaced, he called Detroit and demanded to talk to 'Mr. Ford'. When Edsel Ford heard the story, he told Elvis to return the car to the nearest dealer and he'd get his money back. 'I was disappointed', admits Barrasso, 'but after the problem with the wheels, Elvis was never comfortable with the car. I just wish I'd had the money to buy it back'.

Eventually, Barrasso quit selling cars and went into the nightclub business; his first one was called the Thunderbird. Later, he was hired by the Las Vegas Hilton Hotel to run excursions out to the gambling mecca. More recently, he worked as a casino greeter in Tunica, Miss., but was recently laid off.

Barrasso likes retirement, even if it wasn't his idea. He plays racquetball, soaks in his hot tub, works in his at-home office and reminisces about the time he sold the world's most famous Cadillac man a Ford.

Elvis with his Messerschmitt - June 1956