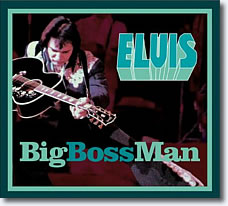 Big Boss Man represents Elvis' 18th March - 1st April 1975 Las Vegas season. What we get is a full CD (78 minutes) of parts of three shows from that season, giving us some rarely performed songs as well as one (almost complete) show from this season. The three shows represented are first the 28.3.75 M/S, then five songs from 31.3.75 M/S and finally three songs from the 22.3.75 M/S. The full show from 28.3.75 Midnight lasted 1 hour, but Kathy Westmorland's performance of My Heavenly Father straight after I'll Remember You has been 'cut'.

Straight away let me tell you that this midnight show was a top show with great mixture of songs. The opening 2001 (thankfully at least here) sounds awful because the soundboard mix hadn't yet been adjusted. This continues through to the start of See See Rider until finally we can hear Elvis & orchestra properly. Elvis starts quite well and soon crazy fans are heard clamouring for his attentions.

Elvis performed a mostly no-nonsense show and starts singing really well with If You Love Me (Let Me Know), it's so obvious he still loves this song. Elvis specialises this show in alternating ballads with Rock and gives the intimate cocktail treatment to And I Love You So - very nice version. Big Boss Man is great with plenty of Ron Tutt drumming. Again after the Rock It's Midnight is strong meat and movingly performed. Back to rock with Promised Land and his voice is so clear he doesn't miss a word - great to hear in this show! Next Elvis possibly might have been considering another performance of You're' the Reason I'm Living as he announces the next song as 'rough'. However he gets distracted and offers Trying To Get To You, Fever or Burning Love before settling on Burning Love - good choice. The intros are nice enough for Elvis to rest a bit (whilst entertaining you can tell he's holding back a bit in this show) and each band member plays a solo. Duke Bardwell comes in for a slighting here as Elvis says he wouldn't throw water on Glen D Hardin, he'd throw it on Duke.

Next pretty Trish Stewart is introduced and then Barbra Streisand in a very flattering intro (after which he says he'll see her after the show - and of course that's when Barbara offered the part of A Star is Born to Elvis). After explaining that he isn't Barbara's date to a pesky fan, he performs another excellent version of My Boy. During I'll Remember You, which he devalues by chatting during the song, Elvis says 'come back Sunday' to a fan and confirming the date of this show as NOT 30th March 75. Let Me Be There is as usual well performed. Hound Dog is 'throwaway'. Whereas An American Trilogy is well sung and a nice concert closer before Can't Help Falling in Love. This has been a well sung and great show from Elvis this season - thoroughly recommended.

But wait their's MORE- 5 songs (in good sound) from the 31.3.75 M/S. You Don't Have To Say You Love Me is a surprise this season and ok, but The Wonder of You hadn't been sung for a while is 'rough'. Not so Bridge Over Troubled Water, which is a fine version. Little Darlin (incl false starts) was performed for Liberace (watching) and The Hawaiian Wedding Song (rare this season) closes samples from this show.

Fairytale, Green, Green Grass Of Home, (I'll be there-part 1 liner) You're The Reason I'm Living close out the CD. It seems as if the oxide may be falling off the tape, yet still nice to have here to complete this CD. Artwork and packaging is ok, nicely designed except maybe not quite printed in focus? Inside is a shot possibly from the 1.4.75 M/S in a white suit and also the wrong dates for the main show. No need to question the date of the last 3 tracks as the last piece of dialogue (about him just being out of hospital) confirms the source as the 22.3.75 M/S for these tracks. While 5 songs have been previously released on 'Live in Las Vegas' 4 CD set, the 8 bonus songs are very nice additions to an essential CD representing a great Las Vegas season.