I sometimes 'cheat' when I receive a classic album from FTD, playing the second disc with the outtakes first.

Elvis (Fool) was no exception.

I love the feeling of 'being thrown' into the studio, and this time around the first thing I heard was James Burton and Chip Young picking out the intro to '(That's What You Get) For Lovin' Me' and Felton Jarvis asking drummer Jerry Carrigan something about which cymbal he'll use. Then there's Elvis inquiring about the intro and Felton cautioning him about the tempo of the song', It seemed too fast, it hadn't got a feel' to it. Maybe you should slow it down some'. Then follows the first take, which has a rehearsal feeling to it.

As I've always liked this Gordon Lightfoot number, it's interesting following the development of the song. Elvis is having problems with the tempo and messes up the lyrics', Who wrote this son of a bitch, I'll break his leg. I might kick your ass again', he jokingly sings as he breaks down halfway through a later take.

The remake of 'Until It's Time For You To Go' is another interesting listening experience. Recorded on June 8, Elvis wanted to redo his May 17 effort, taking the song in a faster tempo. 'It's one step away from boogie woogie, just a little more and we'll get that', he laughs after listening to the piano and loosing it one minute into the first take. Elvis is obviously in good spirits, clowning around before a beautiful take 6, singing portions of 'Farther Along', 'Mean Woman Blues' and 'Oh Happy Day'.

Another highlight is a powerful rendition of 'Love Me, Love The Life I Lead' (take 6) where Elvis sings with much more passion than on the original version. His voice is straining at places, but this only helps to heighten the emotion of the song.

Of the three 'Elvis at the piano' songs, my favorite has always been 'It's Still Here'. And although most of takes has already been released, take 4 hasn't. Only one minute long, it made me smile, as Elvis hits the wrong key and exclaims', God damn! Once I look at this damn piano it'll be alright, man', before launching himself into the version found in edited form on the original album.

Two incomplete takes of 'My Way' are also included, together with the master found on the 'Walk A Mile In My Shoes' box set. Seems the tempo is just a little bit faster on the first take, which to me sounds better than on the later ones. A pity it just runs for 1 minute and 40 seconds.

The second disc ends sensationally, with a previously unreleased take of 'Don't Think Twice, It's All Right.' It's listed as take 2 of a version recorded on March 17, whereas the already released jam on Elvis Now (the unedited master clocking at 9:16 can be found on FTD's treatment of that album) was recorded on May 16, 1971. I think this is a spelling error, as Elvis didn't record anything at all on March 17 due to illness. My guess it's from May 16 as well, or the day after. With a running time of 11 minutes and 20 seconds it must be Elvis' longest recording released to date! It sounds a lot like the version we know, maybe not as driving, but including some great harmonica by Charlie McCoy not found on the original. A great way to end this classic album release.

So how about the first disc?

Including the original album as well as some original alternate mixes and the first LP version leftovers it really doesn't offer anything new. What made the biggest impact on me was 'Reconsider Baby', sounding incredible in an echo mix I guess was intended for the original Fool album thought up by Joan Deary. 'Play the blues James, play the blues!' 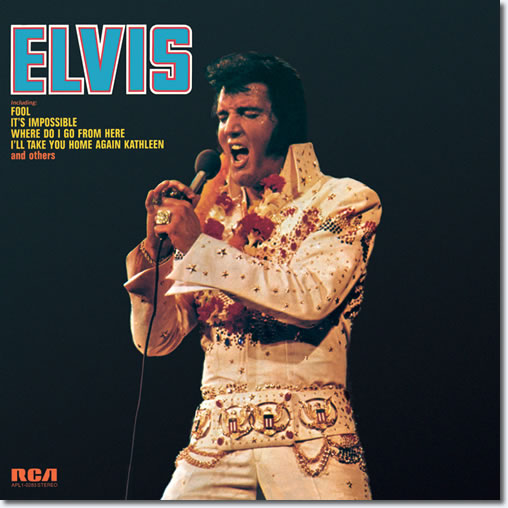 I do have an objection, though. With a running time of around 64 minutes for disc 1, the alternate first take of 'Fool' as well as the alternate takes of 'Where Do I Go From Here' found on FTD's Standing Room Only should've been included. In that way outtakes from all the studio songs on the original album would've been present.

Final verdict: In the 'Behind the scenes' section of the booklet accompanying Elvis (Fool) it states that the original LP 'is in essence an album of leftovers'. I guess the same can be said when it comes to 'Elvis Now', although to a lesser extent. But the FTD treatments of these two albums are essential, as they together include outtakes of all the non gospel and non Christmas songs Elvis recorded during the March–June 1971 Nashville sessions.