Review : If I Can Dream: Elvis Presley With The Royal Philharmonic Orchestra CD

There have been several attempts at an Elvis Presley remix album, none of which have worked. This one does! The songs don't and were never intended to replace the original masters, nothing ever could, but to my ears Sony Music have succeeded where others have failed - they have produced an album that that while remaining faithful to the style that was Elvis Presley have created a new listening experience.

And this is what the album is, a new listening experience, not a replacement of his body of work.

And importantly it is an album. One that Elvis would have - could have - gone into the studio to cut.

With the newly recorded backing the songs sound and feel like they were recorded together, not years apart as of course they are, and normally do sound like. So overall there is the feeling of completeness.

Yet there is still a whole lot of Elvis. The Royal Philharmonic compliments Elvis and doesn't override him. In a few cases where there is something very different and pronounced it is brief, like the opening to 'Burning Love'.

The album kicks off with a unique opening to 'Burning Love'. My very first observation was that this was clever, although overall I didn't much like the track -- but by my third listen I loved it.

It is by far the most different of all the tracks here, a very powerful rock song and very much a 'new' song.

It's Now Or Never

'It's Now Or Never' is second and while it is much closer to the original than 'Burning Love' it really is a wonderful new recording. What strikes me as I sit here now and listen to this song is how I stop and listen to the music, it compliments the recording and I never feel, 'why was that put there'. I listen in awe like I have never done before.

Moving gently into 'Love Me Tender' the opening is very different; until Elvis starts singing then the feel is much the same as the original except now overall it now sounds like a modern recording, fuller and of course stereo. The stings really compliment this song, I think perhaps more than on any other track on this CD.

This track has taken me many plays to appreciate it. I have never been a fan of Michael Bublé - nor had/have a positive few of 'virtual' duets with Elvis (in the words of Waylon Jennings when asked to duet with Elvis on the 'Guitar Man' Album, 'Call Elvis', I told them. 'If it's okay with Elvis, it's okay with me', but after several listens, getting used to his vocal, I like it, it is different, it compliments the overall album, it fits. Also I think that the producers got it right using a male vocal because to me Michael Bublé's vocal is more in keeping with the overall sound than (I suspect) if they had used a female vocal, or even a more 'pretty' male vocal the track. It would have sounded too individual. I could be wrong but this is what occurs to me.

'Bridge Over Troubled Water' up next and there is no troubled water here. This is a perfect track for this project. Perhaps the song is not 'improved' but it is as powerful and enjoyable as ever. So it is a case of the Royal Philharmonic complimenting it perfectly.

And The Grass Won't Pay No Mind

'And The Grass Won't Pay No Mind' has always struck me as something that is both special - so unique - and much under utilized in the many re-releases over the years. The producers seem to agree with me as the new overdubs on this track are very subtle leaving the track very close to the original, yet with a nice new ending. A case of less is more. Listen EASY!!!

'You've Lost That Loving Feeling' is another that is so well suited to this project. And this track is unreal. I can just see Elvis on stage - in London - backed by the Royal Philharmonic Orchestra, what an event that would have been!! So no I haven't lost that loving feeling for this song, this is very nice.

If all things were equal then either 'Bridge' or 'You've Lost That Loving Feeling' could have been the albums title track but 'If I Can Dream' is so much more marketable! 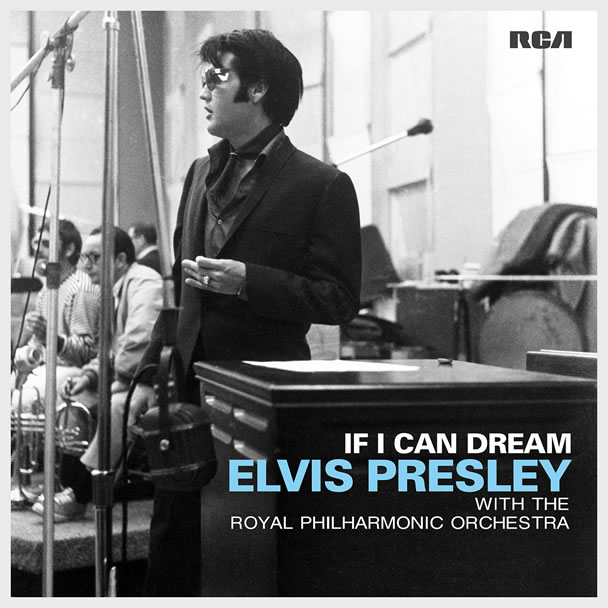 'There's Always Me', a favorite of Don Reedman, the albums co-producer. This track does not really work for me but the ending is powerful and i think most will like this track.

Another great choice for this project. Sound wise the Royal Philharmonic compliments it nicely.

'In The Ghetto' was always perfectly produced to begin with, so they have done well not to have impacted negatively here I think. A nice track, as strong as ever.

How Great Thou Art

How great thou art indeed. What a wonderful re-working of the original. Essentially it makes the song more a balance between Elvis and the music, whereas the original was more Elvis which was fine for a gospel album, but as a single track or as part of a mixed album like this, this works so much better. Perhaps you will disagree, but this is what occurs to me while listening. I think this recording will see a ton of people appreciating Elvis' gospel as never before.

'Steamroller Blues' is well done, it does steamroll along. I like 'What Now My Love' more, as used on the deluxe box set extended CD version, but this is because I like that song better anyway, for Elvis' unbelievable vocal. Importantly I would think the producers wanted to inject something more up-tempo and not another big ballad - for album balance.

Another album highlight is 'An American Trilogy' and here we have a new 'studio' recording with no noticeable audience (as are all the live tracks on this album). Very nice indeed, different but as powerful as ever.

If I Can Dream

'If I Can Dream' is well chosen as the title track.

The new recording is very true to the original and a great way to close.

I have listened to this album five times now, and each time has bought a new level of appreciation for the recording - one I (certainly hope) that will bring Elvis into the CD players, play-lists, or even turntables of a new generation of fans. And the charts! As for existing fans, from our pre-orders, we know there are so many dying to give this CD a go.

The booklet is perfect. There is no long winded liner notes, instead there are three short notes, one from executive producer Priscilla Presley, and one each from the two co-producers. All are interesting and to the point. And they have chosen some wonderful photos for this release, as you know already from the cover.

So overall, a great release.

Brilliant album, tremendous orchestra and the songs are just brilliant. Congratulations to Priscilla Presley for the pleasure of listening to some fantastic productions. By Andrew T. Kiln on 30 Oct. 2015

I am a bit of an Elvis purist so don't like Elvis messed with. This however is superb. Beautifully recorded and when you listen to young Elvis singing with the Bubley you realize Elvis was a supreme vocalist,listen to Troubled water and wow he became one of the greatest in popular music.

Even if you are no great Elvis fan try this, it just might change your opinion. To all Elvis fans buy ,buy, buy so we could have a volume 2. The best of Elvis, but with extra padding Wonderfully blended orchestral element with the voice. The deluxe box set is beautifully packaged. Packed full of my favorite Elvis tracks, and how sexy does Steam Roller Blues sound?!...Very sexy! By JW on 30 Oct. 2015

A fabulous idea, Elvis and the Royal Philharmonic Orchestra, what's not to like? I agree with Priscilla, I think Elvis would have loved this. The purists might disagree and, yes, the originals all sound wonderful too but this helps to keep Elvis' music alive. I think the songs benefit from the orchestration - Can't Help Falling in Love sounds gorgeous and Burning Love and Steamroller Blues even more exciting than the originals. The quality of the recording is first class as you would expect. On Love Me Tender, Elvis could be in the room with you and it sounds as if it was recorded yesterday. One of the less well known songs (and one of my all time favorites) is And The Grass Won't Pay No Mind. It's a beautiful song anyway and on here it sounds heavenly.

The only trouble is that it reminds you that Elvis is no longer here and you miss that wonderful voice all over again. Anyway, new ideas like this help keep his memory alive and perhaps bring him to a new generation of music lovers. After all these years, I wonder what he would think? By Trudy Bradburne on 30 Oct. 2015

Burning Love just blew me away, I first heard it played on Radio 2 and I just could not believe that the song could sound better than the original, brilliant.
By Bess on 30 Oct. 2015

I may be accused of bias as a life long Elvis fan, but this is quite simply the most amazing music I've ever heard, no arguments, no doubts, no debate. What has been achieved here is by putting Elvis' voice with this orchestra is beyond compare. These shiny new coats on old classics whilst being fresh and new are also very true to Elvis' performances of these songs. Every track is mind blowing, it's impossible to pick a favorite. The presentation of the Collectors box is first class. From the Collector's check out 'Heartbreak Hotel'. This is so good I've bought it twice, so I can keep one copy sealed, in mint condition. By JKM 30 October 2015

Elvis' spirit still lives on and this is a true celebration of his pure voice. Well done Priscilla you keep his spirit alive. Hope there is another to follow. Deborah Pomroyon 30 October 2015

I thought I was purchasing this album to experience a new musical backing. That I did. I was not, however, expecting to be so blown away by the vocals as much as I was. I am a massive Elvis fan and have been since I was a child. This album introduced me to new delicacies and nuances in the voice of a singer singing the same songs I have been listening to for for 30 years. Outstanding.

Singers who attempt a duet with Elvis will always come off second best. Great track but gloss has been taken off it by including Buble (good on his own but no match and probably included just to try to appeal to younger listeners for more sales) on what should have been an epic Elvis / Philharmonic Album. Shame. The rest however, Perfection, but 2 stars lost for spoiling Fever for no real musical reason. By M. Chrison 30 October 2015.