This latest release from RCA is a very difficult one to review.

The reason for this is that in order to give it as fair and objective a criticism as it deserves (and it defiantly does) you have to look upon it with two different pair of eyes: The eyes of the devoted Elvis-fan and the eyes of the casual rockfan and cd-buyer. However, let there be no doubt about it: For me it is musically no less than a small revelation and RCA certainly deserves applause for releasing it, as it is the most daring official release in many years, taking for the first time a systematically approach to Elvis' non-studio, non-live recordings.

To put the formula straight, this release contains 22 tracks; all home recordings of one form or the other. Most of them were recorded at Elvis' various homes in Los Angeles and Memphis, some were recorded in Germany and a few in other places. Of these 22 tracks, 15 are previously unreleased as stated on a sticker on the cd-cover (which, by the way, like my copy of 'Sunrise' doesn't have the 'artist of the Century'-label on it - what happened to that campaign?), and of these 15 tracks as far as I'm concerned only one has been bootlegged: 'I Understand Just How You Feel' from the old Eddie Fadal-tape. All the tracks have been digitally remastered. 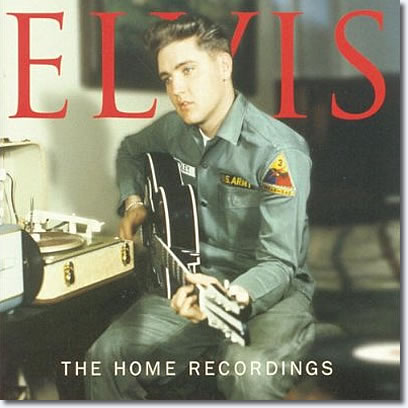 Strangely, though, it doesn't say anywhere in the cover or in the booklet which tracks are the unreleased ones. Usually they're marked with an * in the tracklisting, but this is not the case here. So just for your information the following tracks are the previously released ones: 'When The Saints Go Marching In' ('Platinum'), 'Write To Me From Naples', 'My Heart Cries For You', 'Dark Moon' (all on 'A Golden Celebration'), 'Indescribably Blue' (an original single a-side reaching number thirty-three in 1966), 'I'm Beginning To Forget You' and 'Mona Lisa' (both on 'A Legendary Performer Vol. 4'). The last two have not been legitimately released since the first time around, and as they are a pair of fine performances, it's great to have them available again. The others are easily available on the mentioned releases, though it should be noted that 'Dark Moon' has been cut short by almost four minutes from 6.15 to 2.16, which in my opinion is too bad. In the long version you can really hear how Elvis nosedives into the song, wraps it around him and slowly but surely makes it an Elvis Presley-song rather than a cover version.

The playing time of the CD is 49.14, which is once again quite a bit shorter than it could have been. This is especially true when you consider how much more material of this kind that exists and makes it even stranger why 'Dark Moon' was shortened. Apparently after some years of spoiling us with releases running 70-75 minutes, 45-50 minutes now seems to be the standard.

The accompanying booklet is O.K. although not on a par with 'Sunrise' or 'Memories'. The text is written by Colin Escott and Ernst Jorgensen together and seems strangely unengaging, consisting mainly of a run through of the songs with a mention of their original and subsequent versions. The front has a good picture of Elvis in his green army shirt with an acoustic guitar while the back has a picture of Elvis making a 'v'-sign from his car outside of Graceland. The back of the CD has a picture of Elvis seated in a sofa apparently playing an electric bass!

The sound quality varies from regular studio-quality ('Suppose' and 'Indescribably Blue', both of which also has proper backing tracks as the only ones here.) to just barely listenable ('I Understand Just How You Feel' which has among a lot of other stuff a baby crying in the background), but overall this is probably the best quality heard in this kind of recordings so far. By comparing the songs previously heard on 'A Golden Celebration' with the same songs on this release, you'll see that the difference is quite remarkable. But it has to be stressed that these recordings were never made with intentions of commercial release and were often made under less than ideal circumstances, and that the sound quality therefore cannot and should not be compared to actual studio recordings.

Hence the skisma hinted upon in the first lines of this review. If you are an average rockfan interested in the great figures of rock'n'roll who perhaps bought 'Sunrise' and next sees this in your local record shop, you're probably up for a major disappointment. Better save your money for 'Suspicious Minds' next month. If on the other hand you are a person belonging to that close circle of Elvis-fans wishing to get a little bit closer to understanding Elvis' relationship with music and being interested in exploring the many diverse sources that Elvis had for his own music, then this release offers the as yet best access to such knowledge.

What we get here is a very interesting look (or rather, 'hear') at Elvis singing some of his favorite songs, playing guitar and piano, fooling around with his friends and in general just having one hell of a time. The songs cover a broad variety of styles, actually just about every style that Elvis was ever influenced by, including black gospel ('When The Saints Go Marching In'), white gospel ('I Asked The Lord' and 'Show Me Thy Ways, Oh Lord'), cowboy songs ('Tumblin' Tumbleweeds', originally a great hit for The Sons Of The Pioneers with Roy Rogers), western swing ('San Antonio Rose', the signature song for another king, Bob Wills), country pop ('I'm Beginning To Forget You' from Jim Reeves repertoire, 'Tennessee Waltz', a breakthrough for Patti Page and 'After Lovin' You', which was a big hit for Eddy Arnold), musical ('Make Believe' from Hammerstein/Kerns classic 'Showboat' and 'If I Loved You' from Rodgers/Hammersteins 'Carrousel'), light opera ('What Now My Love' - the absence of 'When The Swallows Come Back To Capistrano' should be noted here, as it was presumed to be planned for inclusion), white pop ('Write To Me From Naples') and black pop ('Mona Lisa', with Elvis' version being closer to Nat King Coles' than to anything else).

That just about leaves out only Hawaiian music, bluegrass, blues and rhythm and blues, and thus actually clearly indicates just how important the influence of the last two mentioned genres were to the rockin' side of Elvis' repertoire as not one single song on this set can with any justification be labeled as a rocker - 'Hands Off' probably comes the closest.

Making their first appearances here are three songs by Elvis' longtime buddy Red West, 'I've Been Blue', 'Mary Lou Brown' and 'It's No Fun Being Lonely'. All three can best be described as slow country ballads with a rhythm & blues feel, and while they are all nicely crafted pastiches they also demonstrate that craft and art are made from two very different pieces of cloth.

There is no shortage of highpoints here. My personal favorite would have to include 'Tumblin' Tumbleweeds', which has much the same quality to it as the long version of 'Dark Moon' described above, with Elvis just carrying on and along the way in just four minutes transforming the song completely from a conversion of a favorite oldie to an original Elvis Presley-performance, 'After Lovin' You' showing that the funky soul-country style, that he would perfect to such fine results in January and February 1969, was allergy in place three years earlier, 'Tennessee Waltz' which Elvis keeps trying to keep on the right track while the gang tries to sidetrack him singing instead 'The Tennessee Horse' and 'Mona Lisa', with Elvis delivering in my opinion the ultimate version ever of this song. Some of the performances are just a little bit too melodramatic for my tastes ('Make Believe' and 'Write to Me From Naples') but fans of the late-70's big ballads � l� 'Hurt' and 'Unchained Melody' might consider them to be the most satisfying tracks on the album.

Listening to these recordings and especially the last 15 tracks, all dating from early 1966, it's impossible not to see them as a correctivum to the official curriculum of recordings made during these years consisting mostly of some of the worst soundtracks that Elvis ever made: 'Harum Scarum', 'Frankie and Johnny', 'Paradise, Hawaiian Style' and 'Spinout' in 1965 alone and not interrupted by just one proper recording session. And a few months later he was capable of recording material of this caliber solely for the purpose of his own enjoyment. As a matter of fact we can probably presume safely that he was performing this material and more to himself and his friends even during the recording of the above mentioned soundtracks. The leeds, once again but with even greater poignancy, to the only relevant questions: What the hell was he thinking? Why on earth did he not enter a f*****g recording studio doing this kind of material? The discrepancy between these informal home recordings and the official soundtrack recordings is nothing but stunning.

The image that reaches you after listening to this album a few times is that of a man, who not merely liked or played music. He WAS music, he ate music for breakfast, he consumed it raw and wholeheartedly and likewise it consulted him from top to bottom. Nowhere does this show more clearly than in these recordings of Elvis being freed from the boundaries of the Radio Recorders studio and not being stuck with a load of rubbish of songs from Hill & Range for the next movie.

With the benefit of hindsight I suppose that we just have be grateful that among all the movie-dross there are actually a few pearls, that Elvis did actually again make music showing his true format and that the tape recorder were quite often rolling to capture the real Elvis performing real music. Hopefully more will be made available to us in the future, though it would surprise me if this album turns out to be a good seller as it is inevitably an album that will appeal almost solely to the medium to hard-core Elvis-fan.

When The Saints Go Marching In - I Understand Just How You Feel - I Asked The Lord - I'm Beginning To Forget You - Mona Lisa - Hands Off - Make Believe - If I Loved You - What Now My Love - Tumblin' Tumbleweeds - San Antonio Rose - Tennessee Waltz - SHow Me The Ways, O Lord - After Loving You - I've Been Blue - Mary Lou Brown - It's No Fun Being Lonely - Suppose - Indescribably Blue - Write To Me From Naples - My Heart Cries For You - Dark Moon

Also see the FTD CD In A Private Moment