The latest King-ly tome, Adam Victor's 598-page 'The Elvis Encyclopedia' isn't as chronologically obsessive as 'Elvis: Day by Day' (1999). But it is an engaging, often insightful and frequently maddening work.

First, the maddening: 'The Elvis Encyclopedia', released in October, offers no index. Even regular encyclopedias have indexes so, say, you could look up every time 'Chicago' or even 'Mitt Romney' shows up in the volume. (Romney is mentioned at least once: The politician used Presley's 'A Little Less Conversation' during his 2008 presidential bid.) The omission of an index will be frustrating for those wishing to cross-reference and find names in multiple entries. For example, the entry for 'girlfriends' forces the reader to scan through three pages of small type before finding the paramour of interest.

Now, the engaging. After many entries, quotes from Presley's associates and fans are printed. For example, after Sun Records' founder Sam Phillips sold Presley's contract to RCA, he thought his former star's first single with the label, 'Heartbreak Hotel', was a 'morbid mess'.

That bit is included in the body text, but directly after the entry, Victor includes a quote from famed British radio DJ John Peel about the song: 'It might sound pretty safe now, but in the context of what was happening in the 1950s, hearing 'Heartbreak Hotel' was as shocking as if someone was dancing naked in your living room'. Unfortunately, Victor does not tell his readers who Peel was and doesn't include an entry for him and many of the speakers, so context is lost.

Though this isn't a photo book, Victor includes 420 images. They include most of the King's iconic photographs, including his famous portrait with President Richard Nixon in 1970 and various publicity shots. Slightly out-of-focus shots of Presley with family and friends create a blurred sense of intimacy.

Also, check out his photo ID when he drove a truck for an electrical contractor (Page 100).

Because this isn't a narrative account of Presley's life, it's difficult to get a cohesive sense of his career, talents and magnetism. But the individual entries are captivating, colorful and gleefully geeky.

Victor, whose previous work includes 'The Marilyn Encyclopedia', notes in his 'Elvis' volume under the 'Marilyn Monroe' entry that although the two sex symbols never met, Monroe sings 'Specialization' in the movie 'Let's Make Love', with lyrics about Presley. (Victor's book does not, however, point out that the Presley lyrics are sung by her co-star Frankie Vaughan in the duet.) Even without an index, 'The Elvis Encyclopedia' is a jewel in the King's crown for aficionados, academics and casual fans.

Adam Victor's The Elvis Enyclopedia continues to draw praise as one this year's best holiday books.

The Wall Street Journal Magazine noted: 'The Elvis Encyclopedia explores all things Elvis Presley-related - entries on every song, album and movie ever released by the King. Compiling information from the testimonies of Mr. Presley's friends, family, agents, managers and others, author Adam Victor even threw in Presley's last will and testament, and a state-by-state list of all hotels frequented by the rock-and-roll icon'.

And from the New York Post: 'No fan of the King would 'Return to Sender' this 598-page volume. Few details are too small for this '70s-Elvis-size book - list of hotels he stayed at in more than four dozen cities, 16 different guitars he used and that Barbra Streisand offered him a part in A Star is Born'. 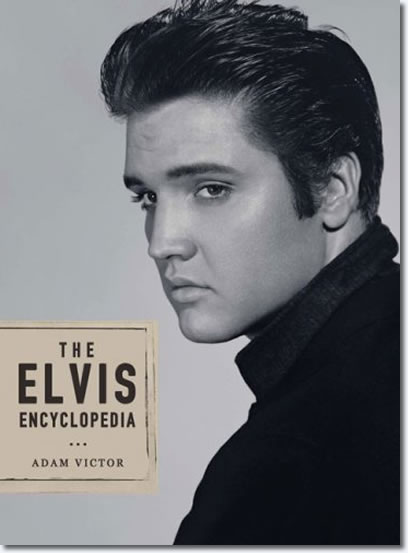