1956 marked turning points for young Elvis Presley. On January 10 - two days after he turned 21 - he left his Memphis home for Nashville for his initial RCA Victor recording session (Victor having purchased his contract from the legendary Sun Records), laying down his first pop hit, chart-topper 'Heartbreak Hotel'.

Another Rave Review : Young Man With The Big Beat

In '56, he became a teen heartthrob across America but, to his dismay, was denounced from pulpits and in the media for his unleashed music and gyrating stage movements.

By year-end, he'd starred in his first film, Love Me Tender, singing its theme and three other songs.

Due for release September 27, Young Man With The Big Beat – a five-CD extravaganza with book, '56 Elvis timeline, full-size poster replicas and other hoopla – presents his every studio release (including two LPs' tracks) from the year on two discs. A third CD contains three concerts; a fourth, studio outtakes; and the fifth, interviews. (A 2 CD box, Elvis Presley Legacy Edition of the studio recordings will also be available.)

As the year began, songwriters weren't yet tailoring their tunes for him, and he was largely relying on covers. Comparing earlier acts' versions of his '56 songs we see what an innovator he was. He turned Eddy Arnold's 1952 waltz 'When My Blue Moon Turns To Gold Again' into pure rockabilly. 'Love Me' (on the 45 EP and 33 LP Elvis) has the rare distinction of making the pop top 10 without being released on a single. An early Jerry Leiber/Mike Stoller composition, it had previously been done as a shuffle by Willie & Ruth (in R&B), Jimmie Rodgers Snow (in country) and Georgia Gibbs (in pop), though nobody's version dented the charts. Elvis' tastes were so eclectic that there's no telling whose rendition he'd heard (maybe even all of them), but he slowed it to a dirge and melodramatically milked its lines for every drop of emotion like no one before him. People might assume that he'd gotten 'Hound Dog' (another early Leiber/Stoller venture) from Big Mama Thornton, but the box's time line says that he picked it up from Freddie Bell when they played Vegas simultaneously.

Elvis' record library included Ely's platters. And back in Mississippi, Gladys Presley had taken her young son to guitar-slinging Ely's emotion-drenched services with their gyrating worshipers. Macel Ely states that Elvis' stage movements were part of the Holiness church he grew up in, though amid this box set's interviews Presley says he didn't learn them from anyone but rather created them on his own.

The live disc's three shows come from a Louisiana youth center, an Arkansas auditorium and Vegas – talk about reflecting a career in transition. All their songs are on studio recordings and the audio isn't always the greatest, but we get to hear Elvis' playful side. As his mid-‘50s girlfriend Wanda Jackson once said, aside from his career, 'In those days at least, Elvis hardly had a serious bone in his body, at least outwardly'. Take the line 'Who learned a lesson when she broke my heart?' from 'I Was The One' (the flip to 'Heartbreak Hotel' – or 'Heartburn Motel' as Elvis refers to it). In various live versions, the object of his affection variously breaks his leg and his neck. Talking between songs in Vegas, he sounds genuinely honored that Ray Bolger and Phil Silvers have come to see him and takes a discreet pot shot at Roy Acuff, who hadn't exactly been encouraging when young Elvis did his life's only appearance on Grand Ole Opry.

The outtakes disc's 17 tracks include 12 'Lawdy Miss Clawdy' takes and 12 of 'Shake, Rattle And Roll', with pianist Shorty Long noodling with 'Yellow Rose Of Texas', 'Shave And A Haircut' and whatever else before 'Clawdy' takes. We hear a brief discussion of the optimal drum riff.

Given how few interviews he did throughout his career and his not having been a letter writer, we don't have a lot of Elvis in his own words, so the interviews are especially welcome. He speaks admiringly of Frank Sinatra and recalls a cherished car. The boy from the housing projects is happy that his mother can now go into a store and buy whatever she wants. As for the controversy he unintentionally generated, Jackson once told Goldmine, 'He was terribly hurt. He just couldn't believe that people thought of him as being vulgar.' But in these interviews he reserves his anger for the naysayers' trashing of the screaming girls in his audience. He's tough-skinned and open-minded about people not liking his music. It's the ugly potshots at his fans that he won't accept. The human being emerging from the interview tapes seems like a pretty decent guy.

A mini review of this deluxe boxset from Atlas Jams online magazine 'Click Here' that just launched their first issue. The magazine includes this review of the new Elvis boxset.

Young Man With The Big Beat' - The Complete 1956 Elvis Presley Masters is due for release September 27. 1956 was the year Elvis Presley went from being a hick rockabilly singer to being the King of Rock'n'Roll. The great thing about it is that the 'hick' inside the boy (he was 21) was still endearingly alive.

Disc #1 has the 12 songs of his self-titled debut LP and EP plus the five singles that were not on either.

Disc #2 has the 12 songs from his second album, 'Elvis', his second EP, plus the non-album singles.

To hear again in proper historical context what Presley did naturally to material by Big Joe Turner (Shake Rattle & Roll), Carl Perkins (Blue Suede Shoes), Ray Charles (I Got A Woman), Little Richard (Tutti Frutti) and Rodgers & Hart's 1934 Blue Moon is to realize the extent of his interpretive genius.

And how much more self-assured he sounds on Disc #2!

Much more revealing is the infamous performance captured here from the New Frontier Hotel in Las Vegas. Four songs. And he bombs. He's obviously uncomfortable, cracking corny jokes like the hillbilly he must have seemed like to a Vegas crowd. His need to feel part of the show business tradition is palpable, exemplified when he stops the shoes introduce Phil Silvers and Ray Bolger in the audience. They both get polite applause. 'And Roy Acuff', he says of the Grand Ole Opry star, 'he's here too'. And, of course, nobody knows who the hell Roy Acuff is and there's an awkward silence where applause should be.

Disc #3 starts with this performance and it's fascinating. It's juxtaposed with a show just 10 days later in Little Rock, Arkansas, where Elvis is back in command and the girls go crazy.

Although the audio is inundated with the screams, Disc #3 is less a musical experience than a sociological one. You strain to hear Presley's between-song banter for a clue as to what must have been going through his mind upon the realization of the power he held over the gushing, screaming, crying women.

Disc #5 is the most fascinating of them all. Here, the 21-year old tries (and fails) to make some sense of what he's going through in a series of interviews. He's honest to a fault, as he belonged to the generation of entertainers who didn't yet know how to play with the press like the Beatles and Dylan would a decade later.

It befittingly takes its title from RCA's very first Elvis poster campaign for his legendary debut album 'Elvis Presley' and celebrates 1956 in style with this retro 12x12 inch format and includes: Full details below ...

Young Man With The Big Beat

2 CD's of all the digitally remastered 1956 RCA master recordings.

1 CD of insightful outtakes that offer a fly-on-the-wall experience of an Elvis recording session.

'Young Man With The Big Beat' will feature one of the most extraordinary books every created at Legacy. The focal point of the book, spread across its 80 pages, will be a unique, meticulously-researched, day-by-day chronology of Elvis' iconic year, including every concert, every recording date, every television appearance, personal events in Elvis' life, and much more. A dazzling photo array of memorabilia will illustrate each day and entry. Concert ticket stubs, RCA memoranda, letters from fans, postcards from Elvis to his family, tour itineraries, magazine covers and articles, trade charts, fan club relics, RCA publicity photos, concert photos, candid photos, and more will be a feast for the eyes and the imagination as 1956 unfolds 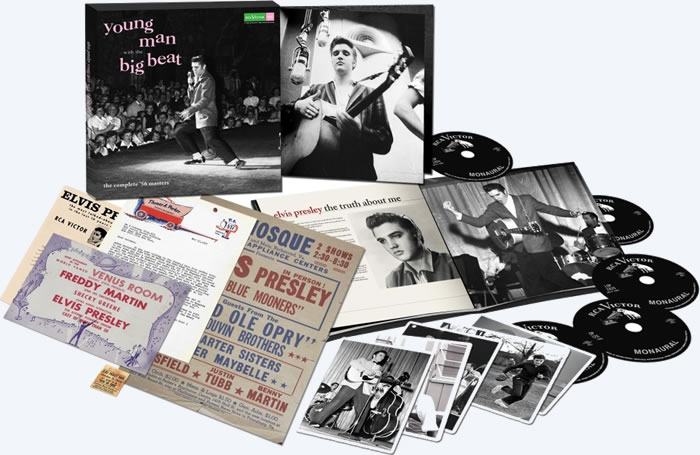 *Recorded At The Venus Room, Frontier Hotel,
Las Vegas, May 6 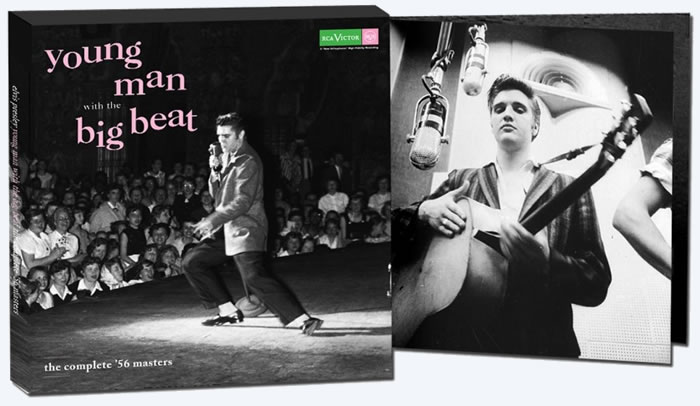