A Minnesota Moment took a fair while to arrive to me (on 17th March) and I have listened to it three times before writing this review. Along with the FTD CD I bought the A Minnesota Minute book from photographer Tim Healy and indeed 6 photos grace the FTD digipack. Clearly Elvis wasn't overweight in October and apart from the dodgy haircut and looking pale in complexion he seems in good form for this tour. Actualy looking sharper than he did in Champaign 5 nights later in the same suit!.

The sound is mostly balanced and 'good' as the show performed on 17th October 1976 makes up most of the 76 minute CD. As 2001 segue into the opening riff Elvis comes on singing okay through See See Rider and then I Got A Woman/Amen in passable versions-mostly he sounds okay. The single Amen ending clearly shows off J.D.Sumner's good voice clear in the mix, as Elvis does his 'waking himself up routine'. A funny incident happens when a woman complains that she cannot hear him and he bellows into the microphone 'listen goddamit!' Next Elvis sings Love Me, If You Love Me, You Gave Me a Mountain, Jailhouse Rock, All Shook Up and Teddy Bear/Don't Be Cruel in succession, but all unfortunately without any real distinction, I mean they sound okay but nothing better. With And I Love You So however Elvis puts real feeling into his performance and receives good applause from the responsive Minnesota crowd. Fever is okay and Steamroller Blues gets another performance tonight as Elvis features this song a LOT in the first part of this tour. It isn't performed distinctively however. All too soon we get the lengthy 1976 Intros and the funniest thing happening here is Elvis introducing The Stamps as 'Postage Stamp-U.S. Male'. Early Morning Rain is very short, What'd I Say short and James Burton plays Johnny B. Goode (as usual) with the Guitar behind his head. After bass, Drum and Electric clarinet solos, Elvis goes on to describe the first song that David Briggs and he performed together as Hurt before then performing a decent version of Love Letters. Next we find both School Days and Hurt as coming from the Dayton Concert on 26th October and having the Piano annoyingly STRONG in the mix. Hurt is performed with a slightly up-higher ending but the Piano ruins it. Back to Minnesota for Hound Dog which is completely forgettable apart from a tiny 'grunt' before the end. At long last next we get two concert 'highlights' as Elvis performs One Night & It's Now or Never with a bit more gusto than usual and committed performances.

The editing here has been done better than usual on an FTD and I had difficulty guessing where the two Sherrill Neilson songs were 'cut out' from, but my 'guess' is before Mystery Train/Tiger Man - which seems to please the crowd before Elvis closes the concert out with Funny How Time Slips Away and Can't Help Falling in Love.

'Bonus' tracks consist of five more performances and another 11 and a half minutes of songs from the next day and also Dayton. Fairytale from Sioux Falls on 18th October sounds 'ordinary' with a weak ending. America is okay but again easily forgettable. The Hawaiian Wedding Song is nice enough (especially as the sound is better!) But again easily forgotten. The final two tracks come from the better sounding binaural Dayton 26/10/76 concert and after a passable Blue Christmas we get a one line and brief instrumental of Lonesome Cowboy before That's All Right from Elvis on guitar - maybe the last track is the best highlight from this CD. 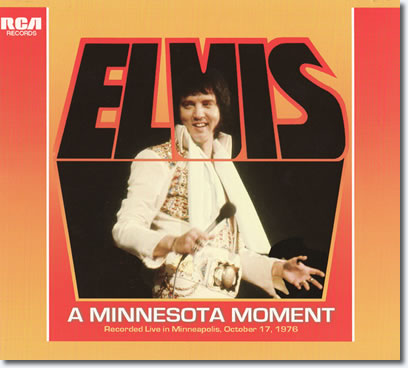 Dr Nick specifically mentions in his book that during this concert Elvis really impressed the Minnesota Fans and maybe he did, but what comes across in this clear + good sounding CD is a very 'routine show' vocally and uninspired on all but a few tracks, similar in fact to the South Bend performance on 20th Oct 3 days later. 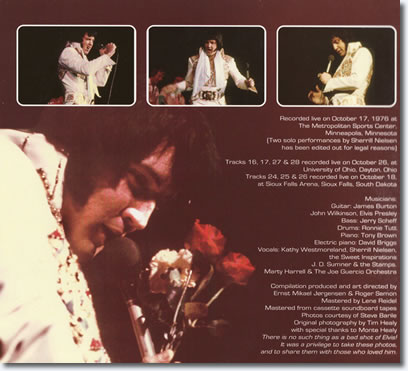 Well FTD has indeed well represented this tour and typically deliberately 'cut out' any solo performance by Elvis' backup singers! The Bonus tracks make the 76 minute running time more generous than has been the case in the past and Elvis looks and sounds as if he's enjoying himself. Whether the better Dayton show would have been a better concert experience - I think it would have been - but here is the latest unheard Soundboard, brand new and quite acceptable concert to listen to albeit with scarcely any outstanding 'highlights'.