On September 4,1972 the UK Elvis Presley fan club flocked to Las Vegas to catch a glimpse of their hero -- and were NOT disappointed! 'Destination USA' FTD 2-CD documents Elvis' Las Vegas 1972 summer season - and for many fans it was a once-in-a-lifetime trip to see the King ...

Note: The 1972 touchstones - 'Elvis On Tour' (the movie), and the revered 'Prince From Another Planet' (2-CD/DVD) capture a performer in stunning form -- and Follow That Dream's 'Destination USA' 2-CD soundboard recording rocks in likewise fashion.

Hot-on-the heels of previous releases, the excellent '3000 Paradise Road' and 'Sold Out' FTDs, the 1972 September 4 Las Vegas dinner show at the Hilton Hotel includes Elvis' mention of the British fan club contingent during the introductions - Elvis says: 'I'd just like to acknowledge the UK Fan club are in the audience. About 200, 250 UK fans are here'.

Reading through the excellent booklet you get a real sense of how amazed they must have felt watching their hero in concert for the first time. Many had never flown on a plane before! A first time experience on many levels' Moreover there's great anecdotes from Radio Luxembourg DJ Tony Prince about how he hoodwinked Colonel Tom Parker into letting him meet Elvis and introduce him on stage. Also of note: Robert Frieser's work on the release and notes. Additionally, Todd Slaughter head of the UK fan club and organiser of the trip, simply called - 'Destination USA', contributes paragraphs which are insightful and poignant.

More highlights: 'Little Sister/Get Back' rocks including a superb bluesy, countryfied solo by James Burton, and tight drums by Ronnie Tutt to finish. Elvis' 1970s versions of 'Hound Dog' moved closer to Big Mama Thornton's original with a slow/fast stax-funk arrangement and the Sept 4 version is no exception - Elvis sings on the intro after his Ed Sullivan routine: 'You ain't nothing but an aardvark, bushhog, warthog, cricket, frog, bushbaby' - before launching into the song - fueled by James Burton's full-throttle wah-wah guitar. Also the rare gospel song 'Walk That Lonesome Road' performed by the Stamps adds interest for gospel completists.

Disc two features a pool of A-grade LIVE RCA recordings from February 1972 in simply DELICIOUS sound. In great voice, Elvis is more animated than the Sept 4 show. Highlights: 'Big Hunk' rocks - 'play it, play it, play it!' He shouts before the piano solo. Also 'Never Been To Spain' sparkles. Elvis sings part of the Stamps part on a SUPERB 'American Trilogy', and Ronnie Tutt's dynamic drum roll is a fine example of the hot TCB band, which concludes the selections on a superb 'I Can't Help Falling In Love'. 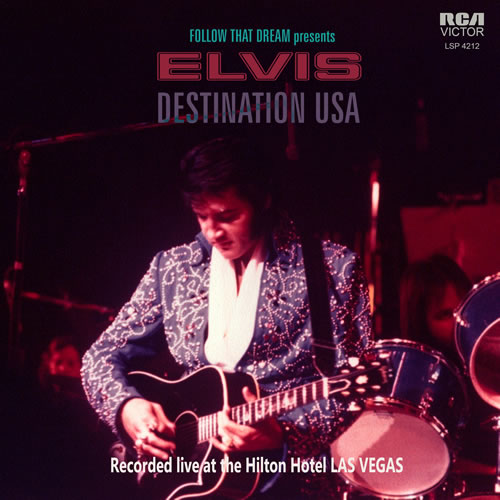 The Rehearsals : Work-in-progress rehearsal selections in sub standard audio captivate, with perhaps The 'Wonder Of You', 'Faded Love' (with reprise) - and the cool blues groove of 'Steamroller Blues' the standouts. Elvis sings - 'Carry me back' on the false start of 'Wonder of You' ('Carry Me Back To Old Virginia' was a song dating back to the 1800s - and was covered by numerous artists, including Elvis favourites - Ray Charles & Frankie Laine.) The classic 'My Way' includes amusing wordplay - I'll say it clear, that you're queer, of this I'm certain'. Before Elvis chastises the band in his own laid back style: 'That was terrible! That was the worst chord change you guys have ever played, the whole time since we've been together. You make it sound like, rinky dink city!' Elvis doesn't lose his cool but there's no doubt who's in charge. 'In addition, Elvis' early add libs on the aforementioned 'Faded Love' indicate the relaxed vibe of these fascinating August 2, 3 1972 rehearsals. 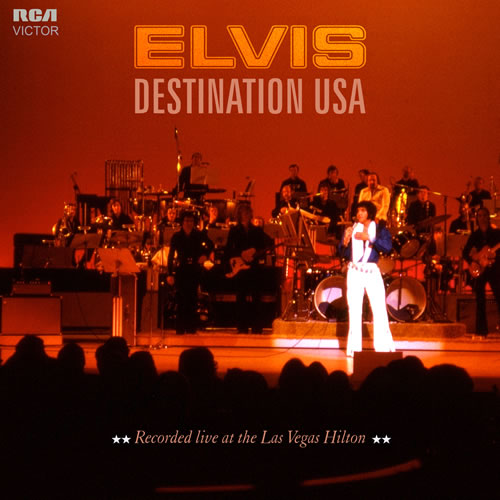 More: opening the release reveals two pale green CDs against a collage of Elvis photos from the era. The booklet has a thoughtful cover shot of the UK fans arriving on a passenger plane at Nashville Airport. There's also stunning photos of Elvis on stage from the September shows including a majestic Elvis wearing his white porthole hole suit with gold cape (4. Sept 8.15pm) - and meeting with Tony Prince and Todd Slaughter. Besides fans from all over the world tell their compelling stories of meeting the King

Note: A bootleg copy of the Sept. 4 show was sourced for review due to Follow That Dream's song error ('See See Rider') - Corrected copies will duly be sent out with the April/ May FTD releases.

Verdict - A mere five years before the throne toppled, 'Destination USA' offers a wonderful snapshot of the King's career. Elvis is in fine voice, if a tad weary sounding on the Sept 4 show, maybe in part to performing extra shows (see booklet), but seemingly happy thrilling the adoring Las Vegas crowd. The soundboard is warm sounding with just a little background hiss. The additional disc is a gold mine of sparkling Feb '72 multi-track recordings, and the captivating August '72 rehearsals' All things considered, this is a fine release dedicated to the hordes of Elvis fans who traveled to sin city in 1972, and the late Elvis Presley fan Rex Martin. 8/10.

What would be your next destination?

Re-live the experience when many Elvis fans from around the world saw Elvis for the first time in Las Vegas, September 1972. The 16-page booklet includes 'eye-witness' accounts from fans who actually met Elvis back stage. It features stories from fans who were there in the front-row seats including 200 member of the British Elvis Presley Fan Club. All of these great personal memories are packed together in the 7-inch 2-cd release with numerous excellent and never before seen pictures.

Artwork and Design by Robert Frieser and Tanja Westendorp with the help from Paul Bevoir from Peackock design.

Sub-standard audio from cassette tape, recorded at rehearsals August 2 and 3, 1972 at The Las Vegas Hilton.

Artwork and Design by Robert Frieser and Tanja Westendorp with the help from Paul Bevoir from Peackock design.