Review : Elvis and the Birth of Rock and Roll photo book

Spotlight on the new Alfred Wertheimer, Elvis and the Birth of Rock and Roll photo book 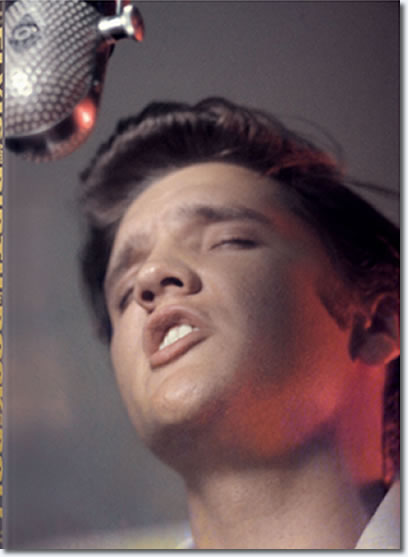 Book cover : Elvis and the Birth of Rock and Roll : © 2013 Alfred Wertheimer/Courtesy TASCHEN.

'Lavish, stunning, historic, and containing some of the most iconic photographs ever taken of Elvis'.

The new Alfred Wertheimer, Elvis and the Birth of Rock and Roll published by TASCHEN, a global leader in the publishing of art and lavish limited editions (www.TASCHEN.com), is one that is sure to become one of the most sought after Elvis collectors item. It is a sumptuous limited edition of just 1,706 copies, all personally signed by Alfred Wertheimer, the man who took the photographs way back in 1956 just as Elvis was emerging from being a regional sensation to become a national superstar.

Elvis and the Birth of Rock and Roll comes is a attention grabbing top quality hardcover book, 12.3 inches x 17.3 inches in size and packed in an elegant clamshell box. It contains 405 super deluxe pages of some of the most stunning photographs ever taken of Elvis, half of which have never been published before.

This collection includes some of the most famous pictures ever taken of anyone ever. It includes photographs including such iconoclastic images as Elvis with cap sitting on motorbike, the kiss backstage, Elvis astride on stage with guitar, plus many more that are etched into the minds of Elvis fans and the public alike.

The whole package is sheer class. 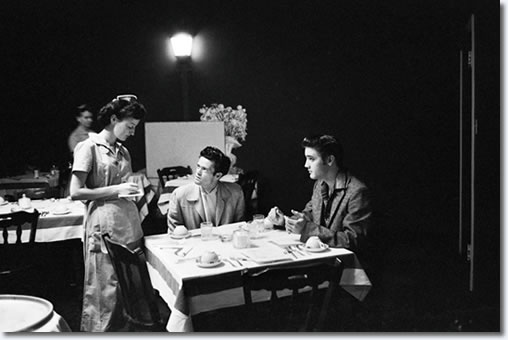 A moment in time

The photographs featured in Elvis and the Birth of Rock and Roll were taken just as Elvis was emerging as a local southern star to a national one. 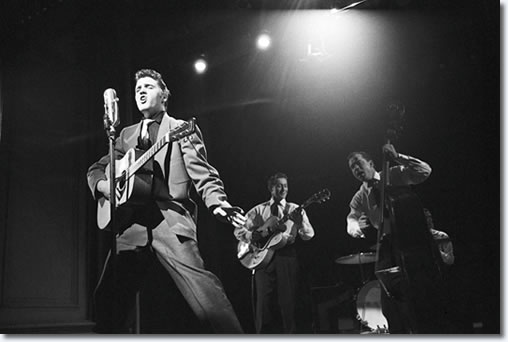 It is at this point that a young Alfred Wertheimer enters the scene. Back in March RCA had needed some publicity photographs of their new signing for their files. Anne Fulcino, the head of RCA Victors Public Relations department had contacted a young 26 year old photographer named Alfred Wertheimer to ask whether he would go up to New York to take photographs of a singer performing on Jimmy and Tommy Dorsey's Stage Show (17th March). His assignment had been to photograph an artist he has never heard of called Elvis Presley. Assignment completed, he is now asked to go back up to New York to photograph Elvis' forthcoming appearance on the Steve Allen Show and to get some further pictures that can be used for publicity. He will join Elvis on the 29th of June and will eventually spend a whole week with him, getting the kind of access to Elvis that no photographer before or after will ever get. Onstage, back stage, off stage. As the photographs featured in Elvis and the Birth of Rock and Roll attest, Alfred Wertheimer didn't waste the opportunity. 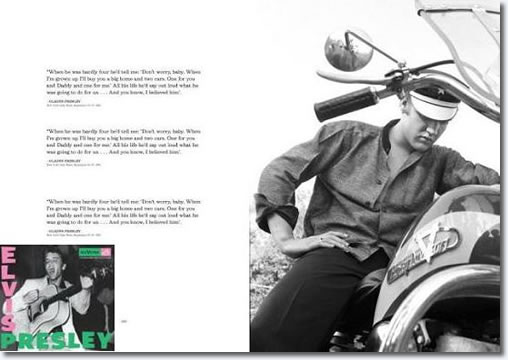 A momentous week in pictures

The week Alfred Wertheimer spends with Elvis at end of June and early July coincides with a busy period in Elvis' professional life.

And all the time his camera clicked. In total, Alfred Wertheimer will take over 2,500 photographs, capturing Elvis' public and private moments. No-one before or after was ever to get such unrestricted access to Elvis, and no-one has ever managed to surpass the visual impact and historical significance in pop culture of the photographs he took. As he later said: 'I put him under my microscope and studied him, only my microscope was my camera lens' (1). 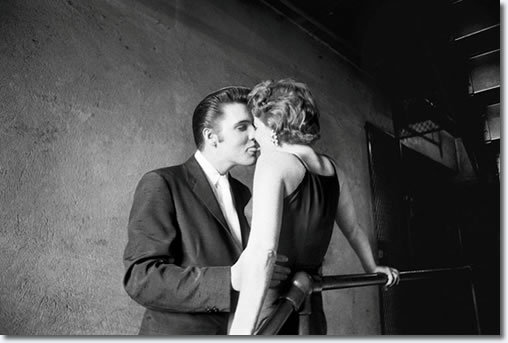 After 1956, Alfred Wertheimer would see Elvis just once more, this time as one of many of photographers at the New York Harbour press conference Elvis held prior to being shipped out to Germany to complete his national service on 22nd August 1958. Some images from this departure are also included in this book but the focus and magic is undoubtedly on that special week back in the end June, early July 1956.

About Elvis and the Birth of Rock and Roll

The photographs featured in Elvis and the Birth of Rock and Roll are witness to an incredible time in the history of photography, as well as to the birth of a star and new chapter in the history of music. The size of the book and its quality is unprecedented. The book and its contents have been expertly designed to give the photographs center stage whilst providing narrative and comment. The photographs show Elvis in performance, with his fans, in the recording studio, travelling back home by train and at home in Memphis with his family. The images are both insightful and stunning. The majority of the images are the stunning black and white photographs we associate with Alfred Wertheimer but there also some eye catching colour photographs in this book too.

The first thing to mention is that this is a huge book with high definition photographs. It's 12.3 inches x 17.3 inches in size. That's enormous! So that you can better appreciate the size, below is a visual showing a scan of an opened page with a CD case superimposed in the bottom left hand corner. 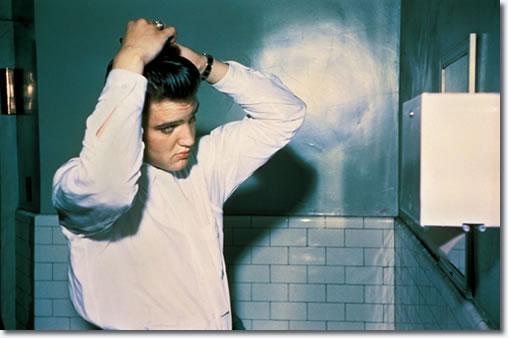 The book starts with a short introduction of the background to the photographs and this book. After that you get double and single page photographs. Impactful is not adequate enough word for the approach. Remember, a page is 12.3 inches x 17.3 in size so this double page image is 24.6 inches wide! Below is an example of a double page photograph. 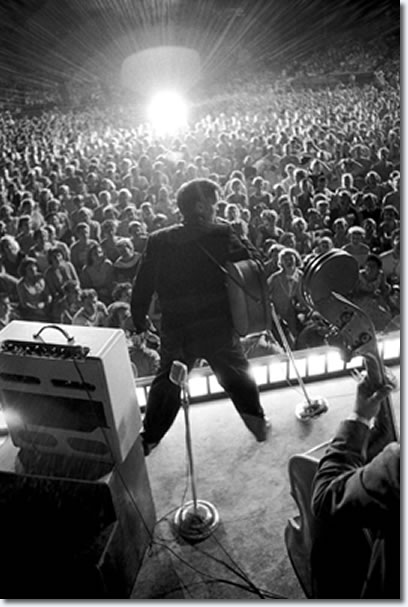 A common page format in the book is of to have a single full page photograph with an accompanying quote on the opposite facing page. This approach works very well and together you get a moving insight of the Elvis the man. As part of the creative concept the quote on the page are repeated 3 times. Here's one of the Elvis quotes: 'I never thought of singing as a career. Infact I was ashamed to sing in front of anyone except my mother and daddy' by Elvis Presley. The book is full of a wide range of quotes from Elvis, his mum and dad, his friends and associates, and from notable commentators. Most of them I never come across before.

On other pages you simply get one page with a photo with the facing page blank. This certainly ensures you focus to the photograph and take in every aspect - the composition, lighting, action and backdrop. You begin to realize these are not just casual snapshots but skilfully taken works of art. Here's an example of this approach below. Would you really want text intruding on your appreciation of this scene?

Other page layout formats featured include having some pages with two facing photographs showing two different visuals of the same event, and having a double page showing a fuller sequence of an action, such as the photo sequence shown below.

A special feature of the book is that each chapter is introduction is illustrated with a new original poster created by Hatch Show Print, one of the oldest letterpress print shops in America. Below are some examples.

Fit for a King

All in all this is a very special book, the likes of which I've not come across before. Dave Clarke is quoted in the book as saying: 'It's rare when an artists talent can touch an entire generation of people. It's even more rare when that same influence affects several generations. Elvis made an impact on the world of pop music unequalled by any other single performer' by Dick Clarke. It would be hard to beat such a fitting and moving tribute as that, but I must say, this book certainly gives it a run for the money.

Talking money, this limited edition book does not come cheap. It oozes quality and artistic design and you do pay for the artistic genius of the photographer and the historical significance of its contents. It is a very special signed limited edition. If you have the money and are an Elvis fan this is definitely a book that will tempt you to add to your book collection. It's worth its weight in gold but fortunately comes in a bit cheaper than that (but only a little bit!).

Press release: Elvis and the Birth of Rock and Roll by Alfred Wertheimer book