Review - Elvis By The Presleys Book 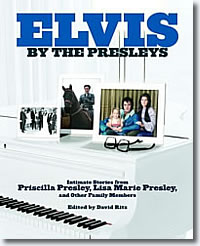 There is little doubt that 'Elvis By The Presleys' is a good-looking and well made book: an attractive and inviting dust-jacket covers the almost metallic-sheen boards of this hardback edition, which contains good quality paper and is well bound. The printing is clean, the photographs well reproduced. It is, then, a shame that each chapter is introduced by a page or two of introductory text that is set in a very large typeface with an almost total lack of leading (space between lines), making the texts appear to be a jumble of letters and thus difficult to read -- a poor layout technique indeed.

The title gives the impression that the book is a look at Elvis by others of the Presley family. Well, in the very broadest sense this is perhaps the case, but really it's just a crafty marketing use of both the Elvis and the Presley names in the same title. Only two other Presleys actually feature: Patsy Presley (Elvis' cousin) and Lisa Marie Presley. Elvis is occasionally quoted, too, but only rarely. The other contributors are of the Beaulieu clan: Priscilla, Ann (Priscilla's mother), Paul (her father), and Michelle (her sister). The book could, then, have been more correctly titled, 'Elvis By The Beaulieus' (or should that be 'Beaulieux'?), but this would have attracted less interest, of course… 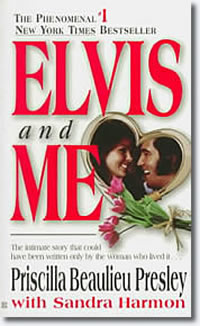 These individuals -- referred to in the book as 'witnesses' -- fill the space between the many illustrations that are contained in the book, with their comments on various aspects of Elvis and his lifestyle. Do not expect any great revelations, or anything particularly new at all from these 'intimate stories', as the cover refers to them. Priscilla's comments read as if she has just done a crash-course in her own 'Elvis & Me' effort and the other comments seem to be there only to assure the reader that Elvis was an extremely polite young man (well, we knew that), but , more importantly, that he was a God-fearing Christian. Indeed, this seems to be the main point of the book, or, at least, this is what comes across most, and the premise is reinforced by several photos of bibles and a prayer-book. To be fair, the book does try to introduce the reader to the idea that Elvis was something of a lost soul, trying to find his way and searching for answers. Unfortunately, the space devoted to such text is so limited that this is opening insufficiently explored (conversely, the good Christian aspect is reinforced). A sign of the times in which we live, perhaps?

As for the illustrations, they are many and well reproduced. A lot of the photos that feature Elvis are already well known to fans, having been reproduced on countless occasions before. Unfortunately, many photos seem irrelevant and pointless and I see no reason at all for some of the photos that take up full pages: a single bullet (yes, enlarged to fill a whole page); a book of matches from the Hotel Sahara (even if Elvis and Priscilla did stay there); Minnie Mae's spectacles (wow!), and numerous others. Other photos certainly do have relevance and even poignancy: Gladys's jewellery box is show and, instead of containing items made of precious metals or gemstones, it displays many probably cheap trinkets associated with her famous son -- an expandable bracelet with the titles of his songs, a medallion engraved with Elvis' image, some brooches in the shape of guitars, and so on.

Sadly, the 'Presleys' involved with the book do not seem to have checked its contents too thoroughly. Surely Priscilla should have noticed that the photo on page 85, which is captioned, 'Priscilla and Vernon in front of Graceland', actually shows Priscilla and her own father…?

All in all, 'Elvis By The Presleys' is a nicely produced book, with some innocuous text, a few interesting photos, and quite a few irrelevant ones (unless you're into Minnie Mae's spectacles).

Buy Elvis By The Presleys Book