Review - Elvis Is Back! CD 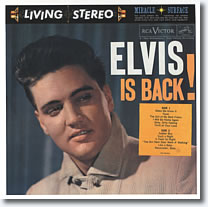 Elvis Presley was discharged from the army on March 5, 1960 and all was right with the musical world again. Elvis immediately returned to the studio for a series of sessions and quickly released his comeback album in April of 1960.

Elvis Is Back may have been the most important album of his career. There had been several releases while he was in the service, but he had been out of the public eye. His young fans were now a couple of years older. Things change quickly within the music world and fame can be fleeting. Did Elvis still have it? The answer was a resounding yes. Elvis brought a new maturity to this album both vocally and in regard to his changing musical vision. Elvis Is Back is comprised of songs from many disciplines but what they have in common are that Elvis would take most of them in a pop direction. His musical future would ultimately be this fusion of polished pop and his rock roots.

Elvis Is Back is a tremendously satisfying album made interesting by the varied song selection. What is amazing are the songs that were left off the record. The series of sessions that produced this album also produced three number one singles. 'Stuck On You', 'Are You Lonesome Tonight', and 'It's Now or Never' could have made this album one of the great releases of all time, but instead served the purpose as single releases to keep Elvis in the limelight for almost a year through continual radio airplay and millions of 45 rpm records sold. While predominantly pop oriented, there are a few non-pop songs that are interesting. The old standard 'Reconsider Baby' and 'It Feels So Right' are both given a gritty blues performance by Elvis. 'Such A Night' is a cover of the old rhythm & blues standard originally released by the Drifters among others. This song, about a one night stand, is given a smooth vocal by Elvis which was far different from the well known Clyde McPhatter effort.

Many of the pop songs show the direction in which Elvis was moving. 'Make Me Know It' was written by Otis Blackwell and is presented as an up-tempo classic pop song. 'Fever' is sung in Peggy Lee style; Elvis does a good job here but Lee's version remains definitive. 'Dirty Dirty Feeling' by Leiber and Stoller is another nice up-tempo outing for Elvis. Elvis even manages to give a competent performance of 'Soldier Boy'. History has shown that Elvis was very pleased with this album. It appears to be a relaxed effort consisting of many songs that Elvis enjoyed singing. While it did not sell as well as his film soundtracks of the time period, it did serve to re-establish Elvis as a commercial force. Elvis Is Back remains an interesting listen nearly forty years later.

Buy Elvis Is Back! FTD CD

Elvis Is Back! - Tracklist:

Review - Elvis Is Back! CD