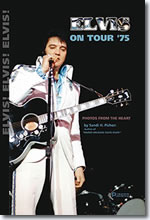 Sandi Pichon's first book, 'Raised On Elvis! Elvis! Elvis!' was published in 2004. It was a well-received first effort by a clearly dedicated Elvis fan. Some of the photo reproduction was not as good as the book deserved, however, so I was rather worried when Sandi's latest publication, Elvis On Tour '75 was announced as being primarily a photo book. My worries were completely unfounded, however, for the new book wins on all counts.

Sandi attended more than 150 Elvis concerts during a five-year period in the 1970s. During those concerts she took countless photos. 'Elvis On Tour '75' is a large-format book which provides photos and descriptions of four of those shows from April and May 1975. Whilst most of the photos come from Sandi's own archives, additional photographic material has been provided by Keith Alverson, Derek Phillips, and Gregor Retkowski. The book begins with a complete list of Elvis' tour schedule for 1975 and then it reviews four of the shows that Sandi herself attended: 25 April at the Veterans Memorial Coliseum, Jacksonville, Florida; 30 April at The Omni, Atlanta, Georgia; 1 May, again at The Omni; 2 May, once again at The Omni. Each review is introduced with a photo of the location (different views are used for the three concerts at The Omni), attendance figures, and a list of numbers performed during the show. Then there are photos, photos, and more photos, accompanied by Sandi's enthusiastic commentary, interspersed with a few Elvis quotes. Because of the quantity of photos, over 400 in total, the text is necessarily brief, but is sufficient in the context of this book.

The photos are all excellently reproduced and beautifully printed on high quality paper (the paper has been specially coated, so that, although the dominant background colour is black, finger marks - usually a scourge on black paper - remain invisible); colours are crisp, most photos are sharp, and sequences of photos provide an idea of the dynamic nature of Elvis' show. The layout is extremely good, being neither of the kitsch photo-album type often attempted in such publications, nor the staid photo-plus-caption variety; instead, a pleasing use of a black background and various photo-sizes and positions provide an interesting presentation. There are close-ups, panoramic views, action shots, and every other type of photograph possible. Concert fans will love the quantity and quality of them. The only drawback is that Elvis wore the same suit at three of the four concerts included in the book, so there is little variation in the sartorial aspect of the photographs.

Elvis On Tour '75 is a book for fans prepared by a fan.

It outshines many of the more commercially produced efforts in both quality of printing and binding as in photographic content. Believe me, Elvis 70's concert fans will not wish to miss out on 'Elvis On Tour '75'.

A Big Hunk Of Burning Love : Sandi Pichon writes about her life as an Elvis fan
Buy Elvis On Tour '75 - Photos from the heart