There have been a lot of 'rehearsal' Elvis CDs to come out, but this one, apropriatly titled, Elvis On Tour : The Rehearsals is by far the best.

First of all, it almost sounds like a studio album.

The songs are mostly complete without a bunch of mistakes and a do-overs and most sound really great. There isn't any joking around, each track pretty much jumps strait to the next song.

Taped at the RCA studios in Hollywood in March 1972 this new Follow That Dream release features a selections of Elvis Presley's rehearsals for his upcoming tour. What I really like is on this disc you get to really hear James Burton's guitar licks and Ronnie Tutt's drums shine through without them being drowned out by an orchestra and backing vocals. True, J.D. Sumner and his vocal group is there, but their vocals are faint. What you hear is Elvis and the rythmn group. The way it should be. This is how his 1970's albums should have sounded.

Elvis doesn't really stretch his voice on this disc (i.e hold any incredibly long powerful notes as he does on most of his 70's work), but his voice is rich and full of confindence as he gets his rythmn band ready for the upcoming tour. My only question is why 'El Paso' is included, since it runs 1:06 and Elvis only sings one line. The rest of the track is just the band playing the music, and it really disrupts the flow of the CD.

The major surprise is 'Young And Beautiful', the song from Jailhouse Rock in 1957. The 1972 version sounds really nice, especially since it was probably the first time he had done that song since the 50s.

I have over 100 Elvis CD's, and am generally more of a fan of his 70's work than anything, and this is my favorite Elvis CD that I own. If you wanted to introduce someone to Elvis' music who's not a fan of 50's rock, 60's doo-wop, or the typical 70's music full of orchestra overdubbs that plagued almost all 70's artist (not just Elvis) then this is the album to do it. All Elvis Fans Must Have This CD !!!!!

Sound quality and mix are excellent and the CD with 19 songs runs 51 minutes.

As a long-time Elvis fan, I've found this CD to be one of my all-time favorites. Full of rehearsals recorded during the making of the 'Elvis On Tour' documentary, it contains optimum versions of many of his circa-1972 songs.

'Young And Beautiful' - a full-length version of the 1957 classic, given an updated treatment for 1972.

'Always On My Mind' - although this performance was previously released on 'The Great Performances' CD (and as an overdubbed, edited performance on the 'This Is Elvis' album), the version here for 'Elvis On Tour: The Rehearsals' has far better sound quality. For me, this is the best recording of the song by anyone. This version is my second-favorite Elvis song, next only to 'If I Can Dream'. 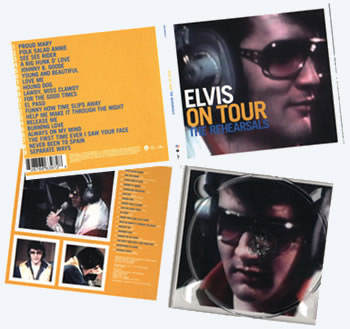 For The Good Times 3:09 (Kris Kristofferson)

Help Me make It Through The Night 2:38 (Kris Kristofferson)

The First Time Ever I Saw Your Face 3:53 (Ewan McColl)