Review: Elvis Presley: 'A Boy From Tupelo': The Complete 1953-55 Recordings

Elvis Presley: 'A Boy From Tupelo': The Complete 1953-55 Recordings is a fantastic set! The Sun masters have never sounded better. You can really hear Elvis' rhythm playing on this set, and Bill Black's bass is more defined. Some of the live material sounds like it was recorded yesterday; The three CDs are the products of 1,500 hours of restoration work and nearly 200 hours of additional studio time devoted to the remastering of the material. However, there are a few tracks that are sub par because of the age of the source tape. But, it's still cool to own the stuff and necessary for Elvis fans, especially if you're like me and think his Sun material is tops.

Of special interest is the inclusion of 'I Forgot To Remember To Forget', a newly discovered track from The Louisiana Hayride on October 29, 1955. It was released in 2012 (Possible via 'public domain' law in Europe) however the difference in sound quality we now hear is massive, a HUGE improvement can be heard in Elvis' vocal. Perhaps this should not surprise as that issue was recorded off you tube! Thankfully Ernst Jorgensen acquired the recording from the owner so Sony were able to make a digitally copy from the original 'wire-recorder' for this release.

Delightful in a way most catalog projects are not, 'A Boy From Tupelo' presents the well-known biographical details from the Elvis Presley trajectory as they unfolded, week by week, with galvanic musical accidents followed by unremarkable contract signings and radio station visits. The timeline begins on July 4, 1954, with Elvis visiting guitarist Scotty Moore's house to go over songs for a tryout session at Sun. The next day's session began with the torch songs they'd rehearsed but soon detoured when Elvis, between takes, sang a jittery reworking of Arthur Crudup's 'That's All Right'. Scotty Moore recalls that he and bassist Bill Black got swept up in Elvis' 'acting the fool', and eventually caught the attention of Sam Phillips in the control room, who told them 'Back up, try to find a place to start, and do it again'. Just savor this twist of fate. Elvis shows up for his first big recording session expecting to sing tender romantic songs. On a whim, he starts 'acting the fool', and the band follows, chasing a twitchy mix of rockabilly, R&B and country that was utterly new. Suddenly that became the art.

Disc one covers the masters recorded for Sun Records, some variations, and the four sides he paid for himself.

Disc two covers all known outtakes, even just the smallest surviving fragments. In all, 26 outtakes along with some studio chatter that shed light on the development of the songs and of Elvis Presley while preserving old-school recording -- live in the studio with no chance to overdub or go back and 'fix it in the mix'.

Particularly delightful are the five takes of 'I'm Left, You're Right, She's Gone' recorded over five months at a far slower tempo than the final, faster take from April 1955 -- a demonstration of how Phillips, Presley, Moore and Black worked and tinkered until they hit the right version of a song.

Disc three compiles every Elvis live performance and radio recording known to exist from the period. Many of the performances come from the 'Louisiana Hayride', the country music show broadcast from Shreveport, Louisiana, that Elvis first played in October 1954. There's also a handful of songs at Eagles' Hall in Houston in March 1955. 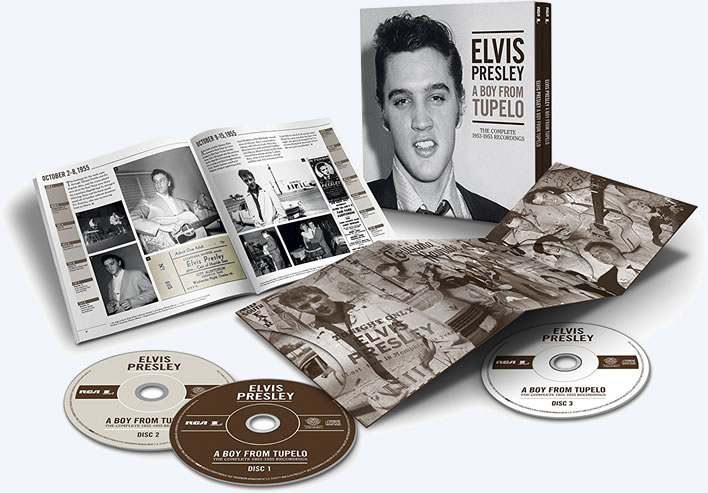 The big drawcard of this set is the 120-page book. It is not a booklet like you'll find with many box sets, but an actual book. It covers the period from July 1954-December 1955 in calendar/journal style, going from one week to the next. There are many, many never-before-seen pictures, too. The book is called, appropriately, an 'illustrated travelogue' -- a day by day accounting from July 4, 1954, to Dec. 31, 1955, with a narrative describing highlights of each week or two, noting every live performance and recording session. The book is crammed full of many, many never-before-seen photos of Elvis, some of which this Elvis aficionado had never seen, beginning in his childhood and running through the end of 1955, when he was all of 20, and on the brink of changing the world. The information included keeps you reading. If you are an Elvis fan, you know the basics of his Sun years, maybe more. This book has a wealth of information, and inside you'll find little known facts, i.e., Elvis once opened for Andy Griffith. The book provides this kind of specific context for most of the highlight reel moments of Elvis' time at Sun. It suggests that what can seem, in the biopic version, like an overnight success, is often something more routine: There's day-in and day-out work involved in developing a musical trademark. The blazing neon meteor of sound we associate with Elvis at Sun was also the story of a Crown Electric deliveryman making the transition to full-time musician, and figuring out how to present himself on stage.

The Sun recordings have never sounded so clear, you'd swear these were newly discovered masters, with virtually no tape noise and a richer, fuller sound that surpasses any prior release. That combination of great sounding remastered tracks, comprehensive outtakes, live performances, photos and a daily dairy makes 'A Boy From Tupelo' indispensable, even for Elvis fans who already have most of the tracks on other recordings.

The bottom line is you need to get this set.

Mojo
Jul 31, 2017
100
Sixty-plus years later, E lives up to his legend, rooted in African-American rhythm & Blues and bursting with explicit erotic energy, controlling his nuclear-fuelled enthusiasm with the gravitational force of his magnificent voice. (Sep 2017, p.102)
Rolling Stone
Jul 31, 2017
100
The set includes the Memphis Recording Service acetates Presley had cut on his own dime ($3.98 a pair, to be exact); the entire legendary Sun Sessions, aborted takes and all; and every known concert and radio recording from the period. The sound quality is likely as good as it'll ever get, and the performances are musical bedrock.
AllMusic
Jul 31, 2017
100
Those consumers in the market for the earliest Elvis will be satisfied by this, as it not only has everything in one convenient box but the addition of the live material does provide a nice coda to the familiar Sun sessions.
Uncut
Aug 3, 2017
80
A Boy From Tupelo is ultimately a necessary and revealing addition to Presley's vast catalogue, one that spins a fascinating yarn about a pimply kid who transformed into something unprecedented: a rock star. (Sep 2017, p.50)
PopMatters
Jul 31, 2017
70
This is not for the casual Elvis fan. The best stuff, his Sun 45s, have been available on CDs for decades. This is for those who want to hear the mistakes, the experiments, and the growth of a young singer defining his sound. Many of the recordings here are rough and partial. They have archival more than aesthetic value.