Elvis Presley teams up with country crooners for Christmas

Priscilla Presley has approved an album where Elvis digitally duets with some of today's country stars on some of his old Christmas crackers. Is nothing sacred? Call it cashing in on the name or the more positive spin of keeping the King alive for a new generation.

'Thirty years down the line I can explain to my kids or grandkids how I did a duet with Elvis', American Idol country star Carrie Underwood explains in the sleeve notes.

Should people stop messing with Elvis Presley's back catalogue? Let us know in the poll below.

That explanation would be: 'I went into a studio and sang in between stuff recorded by a man who died before I was born, then some technological boffins put it all together and whacked it out for Christmas'.

Their beyond-the-grave duet I'll Be Home For Christmas actually works surprisingly well, considering it's the musical equivalent of trying to manufacture some chemistry with the star of Weekend at Bernie's.

Above, you can now view the new music video to promote the Elvis Presley Christmas Duets CD featuring Elvis Presley and Martina McBride 'performing' Blue Christmas. The video takes you and Martina back in time to 1968 and she steps on stage to sing with the King of Rock 'n' Roll.

Underwood trades verses with Elvis while some of the musicians playing in 2008 were around in the '50s when the King recorded the original ... they wisely keep things very faithful. Underwood also shows why she's effectively shut Jessica Simpson out of the country market: voice, looks, talent.

Olivia Newton-John has made it clear that when it comes to duets a pulse is optional.

She did this ghostly caper with the late Peter Allen on Tenterfield Saddler for a recent duets album.

Here Livvy struggles a little to find her place beside Elvis in O Come, All Ye Faithful. It's hard to forget there's 40-something years between both acts recording their parts.

LeAnn Rimes is in perky mode on Here Comes Santa Claus, a song Elvis never designed as a duet. But it sort of works. Martina McBride moves into relaxed, bluesy mode for Blue Christmas, and Anne Murray finds the right groove for her duet on Silver Bells.

However Gretchen Wilson channels some Mariah-style vocal gymnastics for an eight-minute Merry Christmas Baby. That's not really fair considering E wasn't around to step up to the vocal plate.

Meanwhile, the tweaking continues on all-shook-up 2008 versions of The First Noel, If I Get Home on Christmas Day and Winter Wonderland. These songs are kept intact with just Elvis' voice . . . or maybe Priscilla couldn't rope in anyone else in time. [Elvis Australia Comment: See next comment!]

At least the rumored Guy Sebastian/Elvis collaboration for the local version of Christmas Duets was returned to sender. [Elvis Australia Comment: This was Priscilla's decision]

In a word: jovial 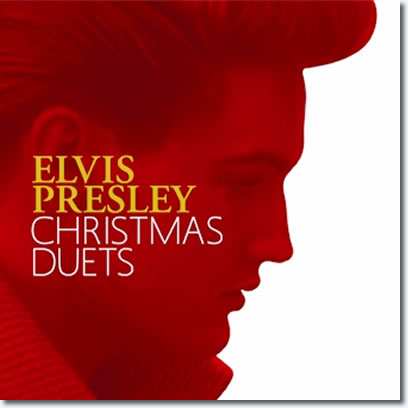