Hot on the heels of their Blu-ray release of Follow That Dream, Twilight Time is back with another Elvis Presley vehicle, 1960's Flaming Star. This spiffy new Blu-ray, which boasts an excellent transfer, is strictly limited to 3,000 copies. Director Don Siegel tackled this Western several years after gritty '50s classics like 'Riot in Cell Block 11' (1954) and 'Invasion of the Body Snatchers' (1956), but this was more than a decade before his iconic 'Dirty Harry'. Make no mistake, this is no Elvis Presley musical lark; The King meant business with this one. He knocks out a novelty tune early on, presumably to satisfy those who simply couldn't bear the thought of a Presley movie without tunes, but otherwise he is here to act.

The story centers of Presley's Pacer Burton, a settler of mixed ancestry living with his family. His dad Clint (Steve Forrest) is a white man, while his mom Neddy (Dolores del Rio) is Native American - Kiowa specifically. This catches Pacer between two cultures, frowned upon by many whites in his Texas town. Things heat up when Kiowa chief Buffalo Horn (Rodolfo Acosta) pays the Burton family a visit. Violence erupts between the white, Native, and mixed regional inhabitants. Clair Huffaker adapted his own 1958 novel, Flaming Lance, with co-screenwriter Nunnally Johnson. Though plagued by an overall sense of nagging blandness, Siegel treats the material with thoughtful respect. He also wrangles a solid, if ultimately unremarkable, performance out of Presley (in the Blu-ray liner notes, Julie Kirgo mentions that it was Presley himself who 86'd additional music sequences in order to maintain a more serious tone). 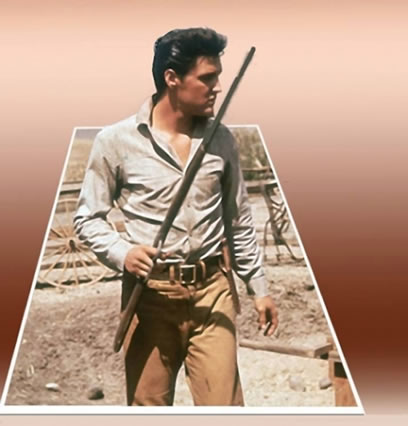 Rather interestingly, Flaming Star doesn't really announce the mixed marriage of Ma and Pa Burton or the mixed race status of Pacer in any declarative fashion, at least in the early going. Instead, Pacer and his half-brother Clint (Steve Forrest) return to the Burton ranch one night, concerned that no lights are in in the farmhouse. That turns out because a surprise party is in the offing, allowing Elvis to sing a silly little quasi-folktune ditty, the only sung moment in the film other than the under credits title song. Everything just seems to be a normal family gathering on the Texas prairie.

The late Charles G. Clarke's earthy, dusty cinematography looks absolutely fine on Twilight Time's Flaming Star Blu-ray. Elvis fans longing for more of The King in high definition should be pleased with this 20th Century Fox-sourced transfer, struck from a spotlessly clean print. The audio is likewise solid. It's offered as a straightforward DTS-HD MA 2.0 mono mix as well as a DTS-HD MA 5.1 surround mix.

The main special feature is an audio commentary by film historians Lem Dobbs and Nick Redman. Take note Elvis fans, these guys offer a wealth of information about Presley's film career and, of course, Flaming Star in particular. If you have enough interest in Presley to seek out this limited Blu-ray edition, you'll definitely be drawn in by this conversational yet informative track. We also get an isolated score track in DTS-HD MA 2.0. There are two theatrical trailers and a booklet essay, which makes a rather passionate case for Flaming Star's quality, by film historian Julie Kirgo. 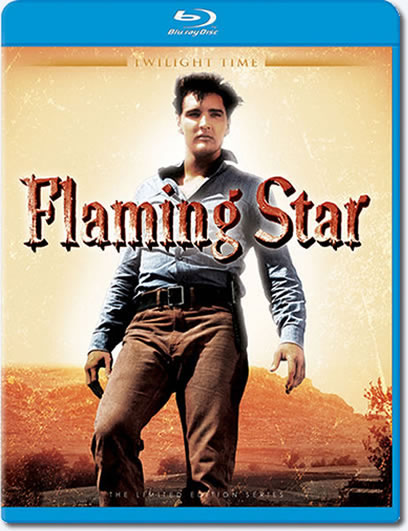 Flaming Star is presented on Blu-ray with an AVC encoded 1080p transfer in 2.35:1. The elements are in great shape from a damage perspective, but colors don't really pop with much vividness, with flesh tones skewing toward brown and the big skies of the film registering in a pale blue at best most of the time. Even the Fox masthead doesn't quite pop with its typical bright yellow hue. Detail is excellent for the bulk of the film, though director Don Siegel and cinematographer Charles G. Clarke opt for day for night techniques for several longer sequences, a gambit that presents obstacles toward any really significant fine detail emerging. There are some odd registration issues that pop up very occasionally as well. Otherwise, this is a solid effort that shows no signs of aggressive digital interference with regard to either sharpening or filtering.

Flaming Star features a lossless DTS-HD Master Audio 2.0 mono mix as well as a repurposed DTS-HD Master Audio 5.1 surround offering. These each are listenable, but each has its own anomalies. There's a slight but noticeable increase in amplitude in the 5.1 iteration, though it also comes with that attendant quasi-phasing quality that sometimes crops up in surround repurposings. While the 2.0 mix is considerably more focused, there's just a slight gurgle of distortion in the midrange that affects some dialogue scenes and Cyril Mockridge's score. The 5.1 mix isn't especially immersive, tending to utilize the surround channels mostly for the score, though occasional sound effects do emanate from discrete channels.

Elvis evidently wanted a 'serious' acting career, but the relative box office failure of Flaming Star (and, later, Wild in the Country) probably relegated him to the lightweight musical fare that came to typify the rest of his cinematic career. Presley is quite convincing as Pacer, and the rest of the cast is similarly effective. The film is in some ways as interesting as The Searchers, even if it ultimately fails to achieve the same kind of mythic grandeur that the Ford film did. While not a traditional western, there are enough tropes in the film that most longtime western fans should find much to enjoy here. Elvis fans of course will not need much convincing to make this part of their permanent collection. Technical merits of this release are generally very good, and Flaming Star comes Recommended.

Wild in the Country)