Standing Room Only is the album that could and should have been released in 1972. Now 37 years later we finally get a concept release from FTD allowing us to enjoy what could easily have been Elvis' biggest selling album of the 1970s. With these masters - in superb sound quality - we are reminded where Elvis was at musically in the spring of 1972 - with strong commercial potential such as 'Burning Love' and 'Always On My Mind' RCA had enough tracks for the theoretical 'Standing Room Only' album plus for another pre-album single release if needed. And just imagine if 'For The Good Times' was released in 1972 instead of 1996!

Following is the best way to sum up this great release, the liner notes from the album.

Standing Room Only was first announced - on the front cover for the single release 'An American Trilogy' in April 1972. In addition to this track being featured on he album, the advertising banner also stated that it was summer release and that it was recorded live.

What the exact final content of the album would have been is not known and a sequenced track listing never formally existed although a selection number was ssued: LSP 4762.

'Standing Room Only' was the tentative title for a new ocumentary that M.G.M. started filming at the end of arch 1972 and when it was finally released in November, it premiered as Elvis On Tour. 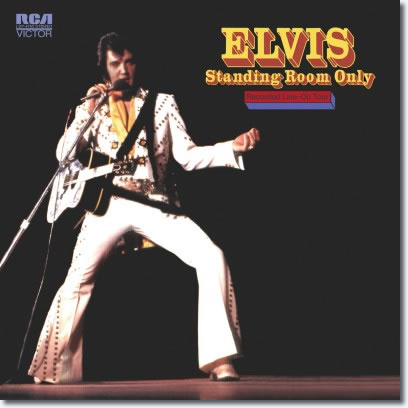 After several photos were submitted for the draft artwork, a front cover for the album was chosen, but an internal memo dated June 12 nformed the art department of RCA that, 'the art originally [planned] for LSP 4762 is being used for LSP 776 Elvis As Recorded At Madison Square Garden'. At this time the album was slated for an August release, but the rush release of the Madison Square Garden concert pushed 'Standing Room Only' back to October. However, on August 11, RCA executive George Parkhill, on behalf of Colonel Parker, cancelled the album altogether. This FTD release merey aims to suggest what 'Standing Room Only' could have been.

It can be argued that it would have been purely a live album taken from the tour that M.G.M. filmed and recorded. It's also easy to assume its cancellation was logical by RCA as both the concept and the repertoire would have been duplicated on the 'Elvis As Recorded At Madison Square Garden' album.

Conversely, it's possible it could have mirrored the concept of 'That's The Way It Is' the soundtrack to the earlier, M.G.M. documentary filmed in 1970. This album combined new fresh studio recordings with further new songs recorded live and one can theorize that such a concept would have brought a title change for the album.

What is factual is that RCA recorded Elvis at the Las Vegas Hilton on the nights of February 14-17, concentrating on recording select songs as opposed to entire concerts. 'An American Trilogy' was chosen as the single over the original plan that had 'The Impossible Dream' penciled. The song selections for these live recordings were mainly ballads and hardly any of the other recordings were considered single candidates, suggesting that this would be material earmarked for an upcoming album.

Elvis followed up these live recordings with three session dates in late March at RCA's Hollywood studio and again it seemed he was just cutting additional material as opposed to an entire album. Elvis hadn't worked at RCA's Hollywood studio since recording the G.I. Blues soundtrack in 1960 and it would be the first time he would use his live concert band for studio sessions. As with the Las Vegas material, the repertoire was over-represented by ballads with lyrics about lost love. According to his good friend Red West, this provided a way for Elvis to deal with his recent separation from his wife, Priscilla.

There were however several selections with strong commercial potential such as 'Burning Love' and 'Always On My Mind' and RCA now had enough tracks for the theoretical 'Standing Room Only' album plus several cuts to choose from for another pre-album single release if needed.

After a good deal of effort, Felton Jarvis persuades Elvis to try the rocker that he has gotten from his friend, Nashville publisher Bob Beckham. Both Felton and Beckham are convinced that songwriter Denis Linde's 'Burning Love' can be a big hit for Elvis. The song reaches #2 on the Billboard and #1 on Cashbox charts.

At this time, RCA was still planning to record the show in Knoxville on April 8th with the officially stated purpose 'to finalize the album', inferring that RCA was recording their own album as opposed to using the recordings eventually made available by M.G.M. on the same tour. Unfortunately there was a power failure at the arena and the recording console was damaged so the show could not be recorded.

By April 4, the plan went into action with the single release of 'An American Trilogy', but it soon took an unexpected and undesired turn, as it stalled at # 66 on the Billboard Hot 100, and subsequently its value as a trailer for the new album was put into question. Three singles had already been released in 1972 and none of them were hits. When the decision to record Elvis at the Madison Square Garden concert developed, it lent itself well to a much-needed pause in the singles release schedule.

The instant and sizeable success of this live album became an ideal set-up for the next single, which was released on August 1. It featured, unquestionably, the most commercial cut from the studio sessions in March: 'Burning Love'. The single climbed to # 2 on the Billboard Hot 100 (#1 on Cashbox's Top 100) and it became the mega-hit that was needed to secure great sales on a new album. 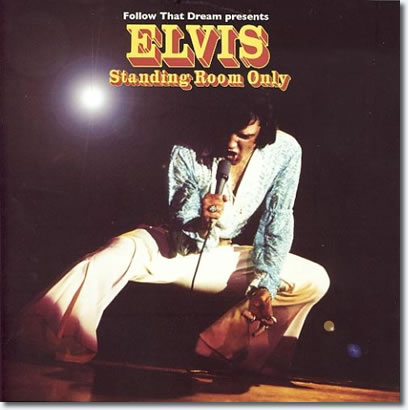 At this time the plans for what would become the Aloha From Hawaii TV show (and subsequent album) were in full development, and at an early stage this was planned for November of 1972. Suddenly there was an overflow of product options. The 'Aloha From Hawaii' album could have been a November release, but M.G.M. pleaded with Colonel Parker to postpone the Hawaiian TV show as it would conflict with their documentary 'Elvis On Tour' now scheduled for a November release. This In principle could make way for a soundtrack album. However if 'Standing Room Only' was to be a true soundtrack album, the repertoire now represented a problem as most of it had just appeared on the 'Elvis As Recorded At Madison Square Garden' album. What could be released was an album of recordings from February and March. This would have been musically credible by providing a current statement of Elvis and his music, as opposed to the retro aspect of the concert albums and it would have featured a true hit single in 'Burning Love' to drive sales to the top

What did happen, however, seems by any standards to be a triumph of both artist mismanagement and commercial insanity. In October, RCA released the second volume of their budget series Elvis Sings Hits From His Movies. The new release was titled Burning Love And Hits From His Movies Vol. 2 in an effort to capitalize on the hit. Except for the b-side 'It's A Matter Of Time', the remaining repertoire was old soundtrack recordings. Apart from the insult to the real Elvis fans that already had these recordings, it was also a case of serious misrepresentation of the artist. RCA boastfully announced the release of the album as establishing several 'firsts'. The most staggering of these'firsts' were that a record company, and an artist, would want to release a current chart single on a budget album and combine it with a stack of old and irrelevant recordings.

This move obviously and instantly killed any ideas of an album called 'Standing Room Only' that by creatively combining the February and March recordings could have been a Platinum selling album. What's even more alarming, is that the exact same concept was used for the next single: 'Separate Ways' / 'Always On My Mind'. This time, however, the enthralling 'Hits From The Movies' tag was dropped. It is testament to Elvis' talent that he was able to survive and thrive in spite of this creative negligence that would have finished the career of any lesser artist. Here it is though - the album that could and should have been.

The producers have chosen to adhere to the logic that this album, although originally intended to be purely live, would have in fact morphed and become similar in concept to 'That's The Way It Is' and contained studio recordings as well. The decision became easier as a recently discovered file for the album contains original RCA song listing notices for each song clipped together as if ready for the designer to update. The cover art is taken from the original mock up for the album that was never completed.

The photograph included to the right of the discs (At right here) was also considered for the front sleeve.

The sequence you might disagree with, but collecting these masters serves to remind us where Elvis was at musically n the spring of 1972 - it would not be until 16 months later that Elvis would enter a recording studio again.

From the Liner notes : Standing Room Only.

Disc 2 - The Studio Out takes