If you believe some fans, surely we've already heard enough 1969 Las Vegas concerts. Now that Live In Vegas: August 26, 1969 Dinner Show is available from FTD, let's take a closer look at their claims.

For those who believe there are no more revelations to discover in these shows, I can easily pull one example of many from this release alone. For over 40 years now, Elvis fans have listened to the 1969 compilation Elvis In Person. How many ever realized that Elvis dedicated the specific performance of 'Suspicious Minds' contained on that album to Barbara McNair, one of his Change Of Habit co-stars?

Elvis evidently thought a lot of McNair, who played Sister Irene, for he plugged her upcoming TV series, 'The Barbara McNair Show', when presenting her to the audience. As mentioned, Elvis' introduction of the familiar version of 'Suspicious Minds' is now slightly different: 'A new record that just came out, ladies and gentlemen, I hope you like it, I'd like to do this especially for Barbie, it's called 'Suspicious Minds'.

Though it is the sixth full-length show released from this engagement, 'Live In Vegas' actually marks the first release of a concert that contributed songs to the 'Elvis In Person' compilation ('Suspicious Minds' and 'Can't Help Falling In Love'). One of the joys of being able to hear complete 1969 shows like this one is re-discovering a song within its original context.

Claim: Every 1969 show had the same set list.
Verdict: FALSE 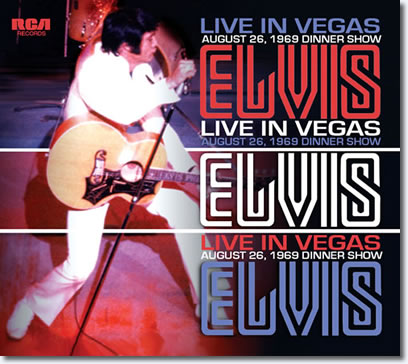 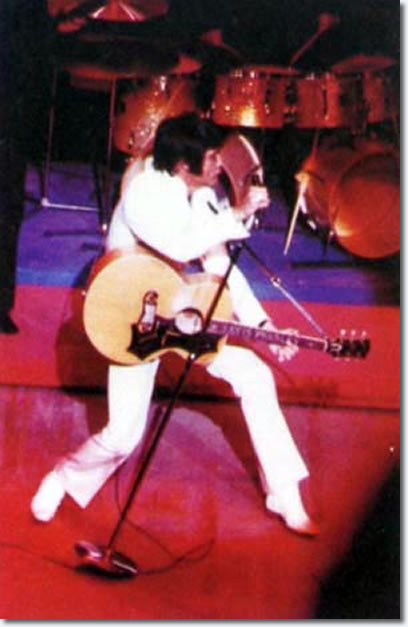 Incidentally, the inane argument that the set lists were always the same wasn't even true of the first five shows released. Don't get me wrong - of course the core set lists are similar.

These shows were all recorded within less than a week's time, after all. The amusing part is that some fans apparently expect that Elvis should have completely revamped his show night after night. The 1969 concerts were about as perfect as any Elvis did in his career, but that's not good enough for some.

Claim: If you've already heard the Midnight Show from this same date on All Shook Up, Live In Vegas will just be more of the same.
Verdict: FALSE

Though indeed recorded just a few hours apart from one another, the shows captured on 'All Shook Up' and 'Live In Vegas' are quite different from one another and do not play like repeats of the same show. The biggest difference is tone. While Elvis seems unable to control his infectious laughter through much of 'All Shook Up' - including the fantastic 'Are You Laughing Tonight' - he is much more focused on 'Live In Vegas'. In fact, other than a few snickers here and there, there is little foreshadowing in the Dinner Show as to what will occur in the Midnight Show. As far as the songs performed for these specific shows, the Dinner Show (Live In Vegas) features 'Memories', 'My Babe', and 'Inherit The Wind', which are not present on the later show. The Midnight Show (All Shook Up), on the other hand, features 'I Can't Stop Loving You', 'Are You Lonesome Tonight', 'Rubberneckin' and 'This Is The Story', which are not present on the earlier show.

I find being able to listen to two shows from the same day during this incredible time of Elvis' career to be one of the most positive aspects of this release, certainly not a drawback. It is fascinating to imagine being there for that single day, somehow fortunate enough to have tickets to both shows.

I'm just glad Ernst Jorgensen and the rest of Sony's Follow That Dream team do not subscribe to the sort of claims refuted above. If they did, we might have missed out on Live In Vegas.

With that out of the way, we can now move on to more important things, like show and sound quality. The first few times I played this disc, my opinion was that no 1969 show had ever sounded this vibrant.

I was so astounded by the sound quality on 'Live In Vegas' that I decided to do an ABX** sound compare against the two 'Elvis In Person' numbers, using Sony's 2010 Legacy Edition of the album (which was paired with On Stage-February 1970). While the overall sound was actually not as different as I expected once normalized, the test did help me to discover something else.

This is actually something I have suspected for years about 'Elvis In Person', but, not being a musician, I had no way to test it out until now. 'Suspicious Minds' on Elvis In Person runs slightly faster than what I believe is the authentic speed as presented on 'Live In Vegas'. By the end of the song, the 'Elvis In Person' version is about three seconds ahead of the Live In Vegas version. The same holds true for 'Can't Help Falling In Love' - the mix was nearly identical between the two, but the 'Elvis In Person' version was slightly faster. While we will not know for sure until the remaining complete concerts that contributed to 'Elvis In Person' are released, the same is probably true of some or all of the remaining tracks on that album. This is all the more reason to be in favor of releases of the complete shows, so we can finally hear these songs as Elvis actually performed them.

I have played all six full shows this week and part of me believes that 'Live In Vegas' is the best of the complete 1969 shows released so far, in terms of Elvis' performance.

I am not quite ready to say that yet, though. I want to give more time for the newness to wear off and allow myself to compare the various shows more objectively. Like all of the other 1969 shows thus far released, though, this is without a doubt one of Elvis' greatest concerts.

Elvis treats his classics with more respect in 1969 than he would in later years. 'Blue Suede Shoes', 'All Shook Up', 'Love Me Tender', 'Jailhouse Rock', and 'Don't Be Cruel' are all contenders as his best 1969 versions.

'You see, they fixed these lights up for Nancy Sinatra. They wouldn't do it for me. That shows where the pull is ... I'll show 'em, I won't come back', Elvis states shortly after welcoming the audience early on. Nancy's engagement on the same stage would begin on August 29, just a day after Elvis' would end. Elvis stuck around and caught her show and, despite his joke, returned to the International for another engagement just six months after this first one. [August 29, 1969 : Nancy Sinatra's Post-Show Party]

'Hound Dog' is also great, once you get past his cringe-inducing introduction of the song that also plagues every other version released so far from this engagement.

There are two tracks I always pay close attention to on the 1969 shows. One is 'Suspicious Minds' - already a known factor on this album - and the other is the 'Mystery Train'/'Tiger Man' medley. Elvis does a kickin' rendition of this medley on 'Live In Vegas'.

While Ronnie Tutt's jungle drums are the focus in the first bits of 'Tiger Man' before the second guitar break, the mix turns over to James Burton's rockin' guitar riffs for the other half of the song. It makes for a great compromise and one of the best versions of the song yet released.

I have yet to hear a bad version of 'Runaway' from these shows, and this one is no exception. What a terrific performance from Elvis, driven again by James Burton. Too bad it was dropped from the show after 1969.

'Yesterday' is the typical 'I'm not half the stud' version and the tacked on 'Hey Jude' ending is no help.

After introducing the band, Elvis has Barbara McNair stand and introduces her as 'a young lady that I just got through making a picture with called Change Of Habit, and I found her to be one of the nicest, warmest, lovingest people I've ever met'. When audience members complain they could not see her, he has the lights turned back on so she can stand up again. [Read more about singer and actor; Barbara McNair.]

It's really cool hearing Elvis promote one of his movies on stage. Since he took a break from concerts through most of the 1960s, when he made the bulk of his movies, this was not an opportunity he had very often.

'In The Ghetto' is beautiful, similar to the 'Elvis In Person' version.

On both of his August 26 shows, Elvis omits his breakneck speed version of 'What'd I Say' and, in my opinion, the shows are all the better for it. 'Suspicious Minds' is the ideal penultimate song, segueing perfectly into 'Can't Help Falling In Love'. Speaking of 'Can't Help Falling In Love', the 'Elvis In Person' version has always been my favorite from 1969, and it sounds even better here at the correct speed. Live In Vegas showcases Elvis Presley at his best on stage in a sound presentation that is richly mastered and crystal clear.

Sony reportedly has another six full shows from this engagement in its vault, including three more that contributed songs to the 'Elvis In Person' album: the August 25 DS and the August 24 & 25 Midnight Shows.

There will always be complainers - even when Elvis was alive, he couldn't please everyone, not even in 1969 - but here's hoping the rest of those 1969 shows, particularly the 'Elvis In Person' ones, are eventually released.

I'm looking forward to hearing each and every one of them.

* ['Suspicious Minds' and 'Can't Help Falling In Love' were sped up on Elvis In Person. The original release of 'Girl Happy' was also sped up (per Collectors Gold liner notes).]

** Essentially, you have sound sample 'A' (Live In Vegas), sound sample 'B' (Elvis In Person) and then are randomly given sound sample 'X' by the software (either 'A' or 'B.') And you have to state whether X equates to A or B, to see if you can actually hear a difference or if you are just fooling yourself. It is slightly different from an AB test in which you just compare 'A' to 'B' without the 'X' factor.