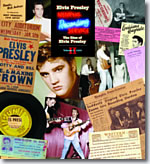 Memphis Recording Service: The Rise Of Elvis Presley Volume 2 1955 is an outstanding follow-up to the first volume of this lovingly compiled project. This lavish production, which includes a hefty 368 page book, Dolby Digital Audio DVD along with a nifty reproduction of the Sun Records Mystery Train vinyl single processed from the original master mother stamper. This package offers a triple threat of fun for the Presley aficionado.

For this reviewer, the highlight is the massive book. Written by Joseph Pirzada and John Michael Heath, the book concentrates on the pivotal year of 1955 when a young 'atomic powered singer' from Memphis, Tennessee was coiled to ignite a rock and roll revolution. Along with the informative text, which provides heretofore unknown details on Presley's career circa 1955, the book is crammed with hundreds of rare photos. Candid shots of Presley on and off stage including some wonderful images of Elvis, guitarist Scotty Moore and bassist Bill Black performing on a flat-bed truck, pictures of the star meeting fans and breaking a few hearts of enraptured females on the way, rare publicity stills, plus a few knockout color shots including a stunning photograph of Messrs. Presley, Moore and Black taken at The Louisiana Hayride in January 1955. The authors left no stone unturned in their quest to unearth rare Presley material as the book is a visual feast showcasing news clippings, concert ads, posters and reviews, RCA Records, Hill & Range and Louisiana Hayride contracts, fascinating correspondence from Colonel Tom Parker, telegrams, set lists, tickets, earning statements, receipts, an arrest report, detailed tour dates, fan diary entries and much more. Absorbing the text and accompanying visuals, one is particularly impressed by how hard Presley, Moore and Black worked in 1955 in their quest for superstardom, setting the stage for his commercial breakthrough the following year.

The Dolby Digital Audio DVD offers its share of restored sonic pleasures culling a generous 40 cuts (many never before available in their entirety until now). Numbering seminal Sun Records sides, Baby Let's Play House, Mystery Train, I'm Left, You're Right, She's Gone, sessions for When It Rains, It Really Pours and How Do You Think I Feel among others, there's also a smattering of live cuts recorded at Louisiana Hayride and Eagle's Hall (Houston, Texas), acetates from a live radio performance on KDVA Radio's 'Cotton Club' (Fool, Fool, Fool and Shake , Rattle & Roll) plus three interviews including one where the future King of Rock & Roll is queried by Mae Boren Axton, future co-writer of Elvis' breakout blockbuster, Heartbreak Hotel. As an added bonus, the DVD Audio disc also includes Elvis' demonstration records for I'll Never Stand In Your Way and It Wouldn't Be The Same Without You, audition recordings of Harbour Lights and I Love You Because and various sundry Sun sides.

Also noteworthy for die-hard collectors is the previously unseen footage of Elvis taped on May 25, 1955 at The Jimmie Rodgers Memorial Celebration in Meridian, Mississippi. Albeit brief in length, this historic footage is the earliest known existing clips of Presley, predating the Magnolia Gardens home movie footage included on the new Elvis Presley-Ed Sullivan Shows 3-DVD set.

A treasure trove of Presley ephemera, Memphis Recording Service: The Rise Of Elvis Presley Volume 2 1955 offers a fascinating peek at the meteoric rise of the Sun Records star. Highly recommended.

The contents are as follows:

The book containing nearly 400 pages of exclusive new information on Elvis Presley in 1955 is written by Joseph Pirzada and John Michael Heath with many contributors including Scotty Moore. See the hundreds of historical rare insider documents and photographs, many of which have never been seen before. This is a journey to over 300 shows that year (more than any other year in his lifetime) with great stories and exclusive new information on this most updated compilation on Elvis in 1955.

Please Note - The DVD is a DVD-Audio / Dolby Digital Disc. It does not play in CD only players. Only in DVD players and DVD-ROM. Below is Explanation

B. 40 Tracks Most Of Which Are Newly Sourced Masters

'How Do You Think I Feel?' exist's only from the echo track tape which was linked to Scotty's guitar making it very hard to distinguish Elvis' vocals.

All Tracks Speed Corrected For The First Time Ever

DVD-Audio is a format for delivering high-fidelity audio content on a Disc. It offers many channels FROM MONO to 5.1 surround sound in either Mono or Stereo at various sampling frequencies and sample rates. Compared to the CD format, the DVD format enables far higher audio quality. The format on this particular disc has nothing to do with reprocessing sound into stereo, pro logic nor has sound been remixed in any way. The sound on this disc is completely natural MONO and the sampling rate given is at its highest quality never before released which is not capable on the CD format.

Sampling rates on a CD today is now considered limited, whereas on the DVD- Audio format it can be 16, 20 or 24 bit, with sampling rates of 44.1, 48, 88.2, 96, 176.4 or 192 kHz. Different sampling sizes and frequencies can be used on a single disc. Audio is stored on the disc in LPCM format which is UNCOMPRESSED or LOSSLESSLY COMPRESSED unlike the CD format.

The DVD-Audio player may downmix surround sound to two-channel stereo or mono if the listener does not have a surround sound setup. The downmix capability is limited to two-channels not to other configurations, such as 4.1. With this, it is still different to a normal CD except in that you are still getting a much higher sampling rate.

DVD-Audio discs commonly contain Dolby Digital of the audio (with lossy compression, usually downsampled to lower sampling sizes and frequencies) in the DVD-Video section. The downsampled sizes are still of higher quality than the CD format. This is done to ensure compatibility with DVD-Video players that do not include DVD-Audio