Review of both concerts in the Rockin' Across Texas 2 CD Set from FTD.

Elvis had recently appeared in Fort Worth on June 3rd 1976. His return concert was July 3rd 1976 and this was an afternoon performance. The show started at 2:00 PM, as did the show the next day, with Elvis appearing on stage around 3:30 PM. Elvis had not requested the afternoon show, the city of Ft. Worth needed the coliseum rearranged early the next morning for a gospel / bicentennial convention of some sort.

This CD (minus the 2001 Theme) and an edit before Jerry Scheff's solo is complete and lasts for around 70 minutes. It's an above average 1976 performance and overall this June 25th - July 5th 1976 tour seems slightly better performed than the previous one. Indeed Jackie Kahane said during a post July 4th party that 'Elvis is singing and performing better than ever during this tour'. The weakest of his five July 76 performances would have to be the July 2nd one in Baton Rouge, however little to fault during this July 3rd performance. 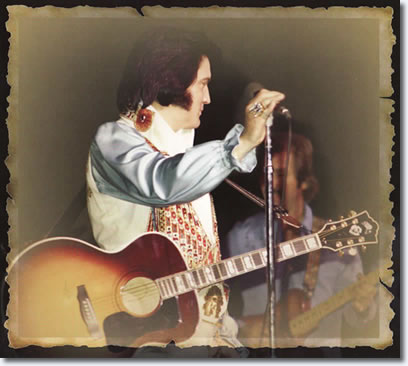 Rockin' Across Texas 2 CD Set - A look inside the set.

The disappointment of the CD starting straight into the opening riff is forgotten once you can hear that the sound balance is pretty good, a little loud on the piano in the mix but overall nice!

An Okay performance starts the show and during Amen Elvis makes a comment about him not usually performing during the afternoon. You Gave Me a Mountain is the first 'gritty' performance and And I Love You So is intimate, up close and personal with clearly audible piano.

The oldies are dismissed, but not totally. A performance of America The Beautiful brings about an amazing reaction from the Fort Worth fans. It's like they let go and applaud for ages! This inspired Elvis and when he goes into Polk Salad Annie with the line 'Down in the State of Texas' the crowd again goes wild. The sound during this version is excellent and after a good version Elvis even refers back to the Pontiac, Michigan version when he split his pants. A fan asks when he's returning to Asheville and Elvis answers back, 'In 77'. Indeed he was scheduled to appear on Friday night 26th August during the tour that never was.

As with all 1976 intros, they drag on a bit, but at least Elvis is amusing in his individual introductions of the JD Sumner and The Stamps members. Love Letters seems a bit slow but two good versions of Hurt make up for this. Hound Dog is a throwaway, but as Elvis says, 'Hurt is a hard song to follow'. During Funny How Time Slips Away again Elvis changes the lines to 'Been a month or two', making a joke out of his last Forth Worth appearance one month ago. Another greeting and a little thank you speech end his performance.

This was another good show from a generally better tour. Elvis sounds clearly awake and enjoying himself. Especially from 'America' onwards, he really delivers. Certainly when compared to Greensboro 30.6.76 show, this one is a far more enjoyable listen. Indeed because of a great and deeper sound, this is the more enjoyable of the 2 shows in this set and a fine 1976 show to own.

Unlike the purely 'disc only' package that these concerts were first released as part of the Rockin' Across Texas book set, we now have atleast a nicely presented double CD digi pack. The songs are changed when compared to June 3rd show, and overall this sounds the better performance. 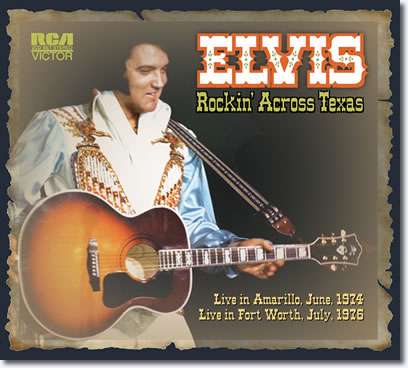 Elvis' June 19th Amarillo, Texas show comes to us as the first CD in the set and sounds pretty much like other June 74 soundboards I have heard i.e. flat and lacking the depth and range of the Fort Worth 3.7.76 soundboard. That criticism aired, J.D. Sumner's vocal is up front, and Elvis' voice sounds clear enough, although a lot of the time you cannot really hear the band! Obviously this is going to be a good show but again it's straight into See See Rider, unfortunately missing 2001 and the vamp. Can't Help Falling In Love at the end also gets cut very short - so it's an incomplete show. However it's an hour long show and Elvis responds to a very appreciative Amarillo crowd with a well sung concert. He makes his mark after the first two songs are performed adequately, making J.D Sumner do Amen twice, and jokes that second performance as just 'fair!'

For this June tour Elvis had a pretty standard set list and that's what we get with this show, continuing on with Trying To Get To You. After this the 'oldies' are dismissed with scarves and completely forgettable until Hound Dog takes us by surprise with its extended ending. Fever has the Amarillo crowd clapping along all the way and during Polk Salad Annie Elvis mentions 'Feedback'. Polk Salad Annie also doesn't sound like Elvis is putting in much effort and yet in Why Me Lord? (with reprise) he does. Kathy Westmoreland's vocal also is prominent during Why me Lord? Suspicious Minds follows and sounds 'fair' and indeed a forgettable version.

During the intros Elvis is keen to emphasise everyone who comes from Texas starting with Kathy from Abilene, John Wilkinson from El Paso, Ronnie Tutt from Dallas and Glen D.Hardin from Lubbock. I Can't Stop Loving You is a good version, as is Help Me. An American Trilogy is performed without mucking around or gimmicks and is a moving 'straight' version. Let Me Be There is well performed before a 'surprise' Heartbreak Hotel which is nice.

As usual, Elvis asks for the house lights to be turned up for Funny How Time Slips Away, and even reprises a joke ending featuring J.D. Sumner. Big Boss Man next sounds 'fresh' and good, Elvis thanks the Amarillo fans and closes with Can't Help Falling in Love. A good show with Elvis enjoying himself and he singing well.

It's a good show and improves upon repeat listening.

Following on after this on the disc is a 5 minute interview with Elvis and Tom Parker in Odessa, Texas on the way to start filming G.I. Blues in Hollywood in 1960. Interesting is the fact that Elvis' segment is pretty terse whilst we get much more verbal from Uncle Tom! Geez! As a concert I would say this is VERY representative from this early part of the tour and even parts of dialogue have been heard before on the 1974 Box Car Album Having Fun on Stage with Elvis. Compared to using a show from the start of this tour in Fort Worth, I feel this Amarillo show is a bit better overall and very welcome addition as an 'unheard live show'.