August 10, 1970. The MGM camera crew has been following Elvis around for almost a month now. This afternoon, it's time for one final rehearsal before the opening show later tonight. No camera crew allowed this time, but RCA is rolling tape in preparation for the concert recordings. Follow That Dream Records' latest release, Stage Rehearsal, takes us behind the scenes of this event.

One of the things I'd been wondering about this release was how FTD would deal with the fact that most of the songs from this rehearsal were incomplete, due to having a 'late start'. The first several seconds of these songs were not recorded. After all, RCA never intended this rehearsal for release.

The way I saw it, FTD had at least three options: 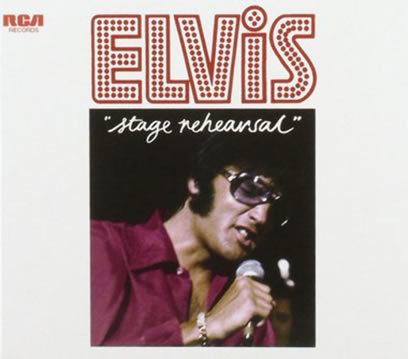 I usually try to avoid reading the opinions of others when I'm planning to review something. That way, my expectations and reactions do not get swayed one way or the other in advance. Sometimes, this is impossible with FTD releases. In the case of 'Stage Rehearsal', I came across a comment revealing that FTD had repaired the beginnings of the songs by using live versions. My initial reaction was shock and dismay. Why would they make such a strange choice? Once I had the actual CD in hand last week, though, and played it for the first time, it became obvious why FTD chose this path. The sound quality of the August 10, 1970, stage rehearsal contained on this CD is comparable to the concert recordings that began later that night and continued for the next few days. To my knowledge, there are no other That's The Way It Is rehearsals that have this level of sound quality. Using subpar sounding rehearsals as lead-ins would have probably been too obvious as splices. Instead, FTD elected to go with the live recordings to more closely match the sound of this rehearsal.

My personal preference would have been that FTD just release the rehearsal as-is, with truncated introductions. This is supposedly a collectors label, after all.

However, I can understand and appreciate their desire to make this a quality listening experience. After all, we were Elvis listeners prior to becoming Elvis historians! In this case, entertainment value won out over historic context. Considering how much I otherwise enjoy this CD, I can forgive them that.

Ernst Jorgensen was asked about the 'controversial' editing. He responded to this eagerly, and it even got him up on his feet. 'I'm glad you asked that!' He said he's quite aware of the criticism: 'I read the Internet, too'.

He said he knows there's a group of people who want everything start to finish, without cuts or changes. In fact, he said, 'I understand; I sympathize with that'. But he said they try to make each disc an enjoyable listening experience, and they viewed the missing openings as a 'problem'. The careful matching of the live versions was the solution they found, and, he said, the leftover audience applause was an unfortunate side effect but could not be mixed out. His final remark, 'It's totally acceptable for us if people criticize us for it, but that doesn't mean we agree with all the criticism' seemed answer enough.

One thing different about this rehearsal compared to some of the others I've heard over the years is that it does not feature Elvis really working on the songs. It feels more like a live show in that regard. This may be because this is literally hours before the opening show (captured on One Night In Vegas, a must-have FTD) and most of the kinks have already been worked out, or it could be because the recording was obviously turned off between songs. Two of the songs are repeated, so that's evidence they were doing some work.

The stage microphones experience feedback a number of times, foreshadowing what would happen later that night during the actual concert so I have to wonder why this problem was not resolved prior to the show?

There are many loose, fun moments but, in the end, the real appeal of the 1970 portion is the sound quality. None of the versions are revelations, though 'version 1' of both You Don't Have To Say You Love Me and You've Lost That Lovin' Feelin' are stellar. Oddly enough, 'version 2' of both of these songs splices the exact same live introductions as used on version 1. I suppose the tempo matched better than other alterntatives, but this really shows why repairing the audio in this fashion was not the way to go.

A few years ago, Warner released 'The Richard Donner Cut' of 'Superman II', showing what that director's version of the movie may have been like had he not been replaced midway through production. To augment the available footage, screen tests of the main actors were used. This footage looks totally different compared to the rest of the film. Stage Rehearsal's 'splices between live and rehearsal material reminds me of this.

The 1972 and 1973 bonus songs that comprise the rest of this CD were recorded on a portable tape recorder. Therefore the sound quality is akin to When The Snow Is On The Roses and other recordings of that nature. These are definitely listenable, though they suffer a bit in following up the near-pristine-sounding 16-track recordings from 1970. I suggest playing the bonus songs first to avoid this effect.

Finally, here, we get some rehearsal work, which is pretty much lacking from the 1970 portions of this CD.

Any Day Now: By 1972, it seemed that Elvis had all but abandoned the songs he recorded at American Sound Studios only three years earlier, save the obligatory Suspicious Minds. Apparently not, though, for here's Elvis sounding awesome on Any Day Now, leaving me to wonder why this did not become part of the show.

True Love Travels On A Gravel Road: This is a good version, but seems less concert-ready than Any Day Now. It could've worked for occasional use as something different. Who knows, maybe he did use it that way.

Portrait Of My Love: Elvis does a brief, unidentified blues number before launching into Portrait of My Love on a whim. This is not so much a 'rehearsal,' then, as it is an off-the-cuff song. It's pretty and probably would've been a decent number if further developed. Wonderful to hear a 'new' Elvis song, I might add.

I'm Leavin' It All Up To You: Another 'new' Elvis song. This one sounds pretty basic, but I believe that is because Elvis severely shortened it.

The funny thing is, I bought this CD because of the 1970 material, but it is the 1972 and 1973 material that stands out. Ultimately, Stage Rehearsal is a well-intentioned release that I recommend with reservations. It offers 1970 rehearsals in terrific sound quality, but with unfortunate splicing decisions. It also offers some 1972 and 1973 rarities, but in subpar sound quality. Be aware of what you're buying so that you won't be disappointed. Then, just crank it up and enjoy. That's what Elvis is supposed to be all about anyway.