Since the Fan Club FTD CD series began it has given us the chance to hear some classic unreleased Elvis material but none more essential that their fourth release 'The Jungle Room Sessions'. 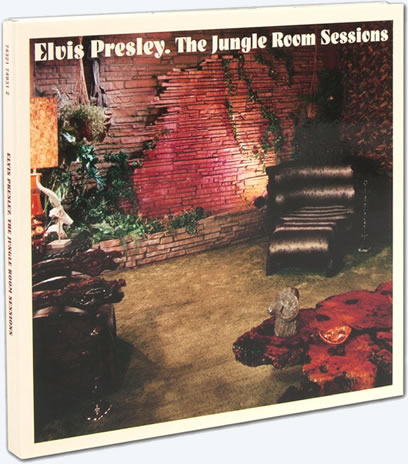 This seems strange when looking back at the facts ...

a) By 1976 Elvis had lost interest in recording (forcing RCA to take their mobile recording studio to Graceland).

b) It's also certainly true that these were not, in general, great songs.

- so how can these outtakes be so important? - The answer is that from the very moment that Elvis says, at the start of the first track 'Bitter They Are, Harder They Fall', - 'You guys don't desert me!' you realise that you ar e being allowed to listen in on a very special experience indeed.

It's midnight Feb 2nd 1976 and Elvis has just walked down to the Jungle Room from his bedroom upstairs. As an 'eavesdropper' you get to hear moments of the real Elvis as you've never heard him before. As take 5 of the song gets under way Elvis laughs and shows himself in good humour when both a dog barking and a phone ringing interrupt the recording-- This is extraordinary 'fly-on-the-wall' documentary stuff.

On the first night they recorded just 3 songs, working through to 9am. This included 17 takes of 'She Thinks I Still Care' - and here we have a delightful version with a very different intro and background vocals. - This was slow, ponderous work obviously with the added complication of not being in a proper studio.

Elvis spent the whole of the second night working on 'Solitaire' but here the new clarity and amazing frailness of the sound really make these undubbed versions so special.

These two songs help highlight the real discovery of this CD which is just how badly Felton Jarvis' orchestral overdubs, editing and the added echo of the original releases really spoilt something very special. Sure these are mostly sad sentimental songs, which obviously reflect Elvis' mood at the time, but they are also fragile, gentle songs sung with a passion and feeling that should never have been tampered with.

'I'll Never Fall in Love Again' has received poor reviews elsewhere but in my opinion this is a delicious version and one of my favourites. True, Elvis can't compete with the power of Tom Jones original but the slight trembling of his voice gives it a very special edge. He sings,'Please don't make me, please don't make me fall in love again - I mean it, I mean it' - and you know he really does! Three classics follow - 'Moody Blue', 'For the Heart', and 'Hurt'. There is a long false start on 'Moody Blue' plus some fun 'blue' lyrics, 'That's the Italian version' Elvis jokes. All three are interesting warm up versions as they head towards the final Master take.

'Danny Boy' take 8 is truly beautiful. It was the early hours of the morning and Elvis had been struggling to record the song in a higher key and so this take starts with Elvis saying- 'I'd like to do it in C, that's what I'd like to do better'. Possibly the best take of this song despite his voice quavering at times - Full of emotion and so understated that's it's almost a-capella - Brilliant.

Elvis wanted to sing sad songs at this time in his life and the last 2 songs from the February sessions, 'Love Coming Down' and 'Blue Eyes Crying in the Rain', are perfect examples. Again both these unreleased takes also benefit from the lack of overdubs which now help highlight both the band and Elvis' vocal.

Elvis' last recording session, again at Graceland, was in October 1976. This session produced only 4 songs, but what classics they were! Elvis' life was spinning out of control and 'It's Easy for You' captured it perfectly. Written specifically for him by Andrew Lloyd Webber + Tim Rice, Elvis starts by saying-. 'I get carried away very easily, emotional son of a bitch!' The released version on Moody Blue was completely ruined by an awful mix but this version is exquisite - 'I had a wife, I had children, I threw them all away' he sings - Amazing poignant stuff.

The great 'Way Down' follows - but sadly this is the same version as on 'Platinum' which is the only slight disappointment of this CD (other takes as heard on Bootlegs are just as interesting).

'Pledging My Love' however makes up for this since it is another true gem. Running for 5 1/2 minutes Elvis just can't get enough of the song. - A beautiful, clear sound helps you hear how much passion and soul Elvis poured into the track. Tragically this special 'vibe' was lost in the original, brutally edited, Master. This new version is pure, soulful, magic. Capturing Elvis' real passion for music this full-length version completely changed my opinion of this song and demonstrates the importance of these FTD CDs. Finally, the last song Elvis ever recorded, 'He'll Have To Go' - similar to the final version that was an overdub - this is sad, emotional listening.

The CD does have 2 further 'Bonus songs' though! First is the backing track of Jerry Scheff's 'Fire Down Below' recorded in October but never completed. Felton carried this around with him for some time hoping to convince Elvis to do the vocal overdub - and with its 'Way Down' feel you realise that Elvis could have produced a great rocking single from it. A real missed opportunity.

Also (and a hidden surprise not noted on the CD cover) the final 15 seconds is Elvis singing the last few moments of a studio version of 'America'. This is all that was left of Elvis' unsuccessful attempt to complete the song in February - Felton wiped over the rest when recording 'Blue Eyes Crying in the Rain'.

The Jungle Room Sessions is truly an astounding packed 72 minutes of essential listening that is also an amazing documentary capturing some extraordinary moments of Elvis' life. I strongly recommend that you read the final chapter of Ernst Jorgensen's sessions book 'Elvis Presley - A life in Music' while you listen to these songs as it helps bring everything into focus. After 'The Jungle Room Sessions' the majority of the original releases on 'Moody Blue ' and 'From Elvis Presley Boulevard' now sound so disappointing. Of all the CDs produced by the FTD team this is the one you must have, whether you are a fan of 70's Elvis or not. For me it was an amazing, sad, special and extremely moving experience. If you don't already own it - Buy it now!