Roy Orbison talks about Elvis Presley and 'Only The Lonely'

Roy Orbison talks about Elvis Presley and 'Only The Lonely' (10:28)

Listen as Roy Orbison talks with Glen A. Baker about Elvis Presley and 'Only The Lonely' (1980 interview).

Elvis held Roy Orbison is very high regard, publicly stating that Roy had ' most perfect voice' and referring to him as the 'greatest singer in the world' during one of his Vegas concerts.

Roy was the only artist to open for both The Beatles and Elvis Presley.

Elvis never recorded one of Roy Orbison's songs, a clear mark of respect in that he did not believe he could better him. The closest he came was one line of 'Running Scared' while recording 'Tomorrow Never Comes' for his classic Elvis Country LP in June 1970. Although legend has it that Roy turned up at the gates to Graceland with a song he has written for Elvis, 'Only The Lonely', however Elvis was not home and Roy went on to record the song which was his first smash hit. In 1979 Roy recorded a tribute song to Elvis, 'Hound Dog Man'.

Elvis' one-liner of 'Running Scared' can be found on the Essential '70s masters 5 CD Box Set.

Roy Orbison saw Elvis for the first time in Odesa, Texas: 'His energy was incredible, his instinct was just amazing . . . I just didn't know what to make of it. There was just no reference point in the culture to compare it'. Roy Orbison's historical impact on rock 'n' roll is undeniable, supplying haunting classics and inspiring artists like Bruce Springsteen and Bob Dylan. But had it not been for a 1955 concert at a high school, Orbison's superstar career may have never happened. When historians and musicologists discuss the history of rock 'n' roll, it is impossible to ignore the impact of Roy Orbison. Orbison is remembered for haunting classics like 'Pretty Woman', 'Only the Lonely', 'Blue Bayou', and 'Crying'. Bob Dylan, Bruce Springsteen and Tom Petty are among the icons who credit Orbison as a vital talisman for their musical journey. 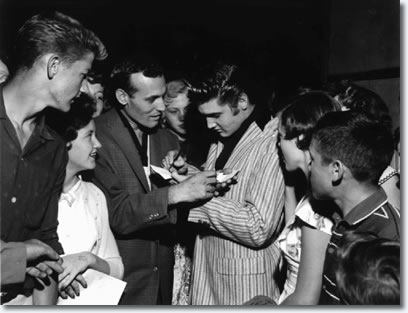 The throbbing undertones of U2, the falsetto of Led Zeppelin's Robert Plant and the Bee Gees' Barry Gibb and the melodrama of Queen were all inspired by Orbison's musical stylings. However, had it not been for a 1955 concert at Midland High School, it is entirely possible Orbison's superstar career might never have happened.

The Oct. 12 package show starred Elvis Presley and featured Johnny Cash, Wanda Jackson, Floyd Cramer, Porter Wagoner, Bobby Lord, Jimmy C. Newman and Jimmy Day. Several in attendance also remember Billy Walker performing, but his name isn't found on any surviving newspaper ads, contracts or promotional materials. Jane Carrens, a student at Midland High at the time, who later became principal there, said it is amazing to look back and think how accommodating the school administration was for such events.

In fact, classes were often called off when a big name act was scheduled to appear in the evening, so that students could attend a free preview in the school auditorium. 'It was crazy to see how the girls reacted to Elvis', Carrens said. 'These were friends of mine and they just went crazy when he came on stage'.

At the time, Presley had hits with 'Blue Moon of Kentucky', 'I Forgot to Remember to Forget', and 'Mystery Train.' Cash had charted with 'Hey Porter' and 'Cry Cry Cry', and just released 'Folsom Prison Blues'.

Stanley Oberst, author of 'Elvis in Texas', said, 'Elvis had been on tour with some stars from the Louisiana Hayride and then broke off to join the group that went to Midland'.

Oberst has collected thousands of photographs, documents, interviews and ledgers regarding Presley's concerts across the Lone Star State. He said, 'For a concert like this one, the lesser acts were only doing about three numbers. Cash would have been next to last and then Elvis. You didn't want to go on after Elvis because everybody would just get up and leave to try and get a look at him when he left the auditorium'.

One of those who wanted to meet Presley was Orbison. He had attended earlier Elvis shows in Midland and Odessa, as well as concerts in Lubbock and Dallas. His goal was to talk to Presley and find out how he had gone from local singer to 'The Hillbilly Cat' in less than a year. The afternoon of the Midland High concert, following the free preview, Orbison got his opportunity, in the form of Johnny Cash.

Born April 23, 1936, in Vernon, Texas, Orbison moved with his family to Wink, Texas, when his father took a job in the oil patch. Drawn to music, Orbison started a country band known as the Wink Westerners. In addition to playing area dances, Orbison and the Westerners were regularly featured on Television stations KMID and KOSA and Kermit's KERB radio during live music programs. He formed the Teen Kings, who were regularly featured at local dances and talent shows. Wanting more from his career than the chance to compete for ponies or dinner for four for a band of five, Orbison began seeking all the media attention he could garnish. Ronnie Slaughter of Ronnie and the Regals, another mid-1950's rockabilly band, said, 'We all had day jobs. So did the rest of the Teen Kings. But Roy's parents really helped him out. So he got to go around all week promoting the band and seeking concerts and dances'. One of the performances he arranged was a Wednesday afternoon appearance on KMID. Also scheduled to appear on the show was up-and-coming superstar Johnny Cash. Cecil Holifield Jr., a student at MHS, whose father owned the Record Shop stores in Midland and Odessa, said his dad not only promoted the Presley and Cash concert, but also arranged for various stars to appear on TV and radio in Midland/Odessa. In addition, 'Pop' Holifield Sr., was also an advisor to Orbison about his would-be career. There is only circumstantial evidence, but it is strong that Holifield asked Cash to appear on KMID because he knew that Orbison would also be performing.

Whether the meeting was orchestrated or an accident, the result was the same. In spite of Orbison's thick glasses and rather bookish appearance, Cash was dazzled by his abilities as a singer and guitarist.

He invited Orbison to the Midland High concert with a promise that he could finally meet Elvis. Apparently, Cash also wanted Presley's opinion about Orbison's chances as a recording artist on Sam Phillips' Sun label.

Oberst said, 'By this time nobody was getting backstage unless they were let backed by someone like Cash. There were just too many girls wanting a piece of Elvis. There were also a lot of jealous boyfriends that they didn't want back there'. After talking with Orbison, Presley and Cash both agreed that the Wink native had the makings to be a musical success. Oberst noted there 'probably wasn't a lot of conversation' because all three men were very shy and soft spoken. Holifield Jr. said it was likely Cash and Presley explained to Orbison that making one's musical mark came with a heavy price tag of travel and uncertain finances.

'They might only make $30 a night and then they had to pay for their food, hotel and expenses', Holifield Jr. explained. Ronnie Slaughter of Ronnie and the Regals said the timing of Cash and Presley's advice to Orbison couldn't have been better. 'The other guys in the Teen Kings were pretty upset because Roy would tell the person where they did a dance to give him the money. Then he would pay the band', Slaughter said. 'He felt he deserved more because he set everything up. They thought the money ought to be split evenly'.

'Then (after meeting Cash and Presley), Roy wanted to go off to Memphis to Sun Records, but those guys all had day jobs. They were about ready to fire him and get another singer', Slaughter recalled.

Without the help of 'Pop' Holifield, even Johnny Cash and Elvis Presley couldn't get Orbison a contract. Rick Koster, in the book Texas Music, noted that when Orbison called, Sam Phillips made it clear that no one, not even Johnny Cash, was going to dictate who did and did not get an audition on his record label.

Oberst added, 'After what had happened to the careers of Elvis and Cash, artists were coming to Sam Phillips in droves. Harold Jenkins, who later changed his name to Conway Twitty, was rejected by Sam Phillips'.

However, 'Pop' Holifield was a regular contributor to Billboard magazine. He offered to call Phillips for Orbison, promising the Sun Records chief he would never regret auditioning Orbison.

Adding Holfield's endorsement to that of Presley and Cash was enough to sway Phillips. By May of 1956 Orbison had his first hits on the Sun label, the back-to-back singles 'Ooby Dooby' and 'Go Go Go'.

Orbison also quickly signed a music publishing deal with Acuff Rose in Nashville, thinking he might have a better chance as a songwriter than a performer. Don Samples was a Midland High student who saw the Oct. 12 concert with Presley, Cash, Wanda Jackson and the others. Samples also attended Odessa College when Orbison returned to the Permian Basin to celebrate his early success. 'Roy came back in a Cadillac convertible and drove around Odessa College waving at the girls', Samples said. 'They just flocked to him'.