Bruce Springsteen was seven when he first saw Elvis on The Ed Sullivan Show.

Elvis Presley's third and final appearance took place on January 6, 1957. On that Sunday night in 1957, Elvis smiled, smirked and played with the audience. Breaking from his usual attire, Elvis came out wearing a bloused shirt and vest, with makeup painted around his eyes. That night Elvis sang hits like Don't Be Cruel, Love Me Tender, and Hound Dog, shaking his hips and standing on his toes while girls screamed in the audience. And that guitar: it was a weapon and it was armour. This was the dream.

Watching the show, Springsteen felt mesmerised: 'I couldn't imagine anyone not wanting to be Elvis Presley', he recalled. His mother eventually bought him a guitar and even set up lessons, but Springsteen's hands were too small. He didn't like structured instruction, and he put the instrument aside for sports.

Throughout the years that Elvis lived at Graceland the front gate area was a place fans enjoyed being. There was the chance that he might drive through in one of his cars or on a motorcycle, or ride down on a golf cart or on horseback and have an impromptu autograph session. They could also watch him and his friends ride their horses and golf carts around the grounds. Even when Elvis out of town, it was fun to be at the gates, getting to know the guards (some of whom were Elvis' relatives) and meeting other fans from around the nation and the world. When Elvis was away, sometimes the guards would let fans onto the grounds for photos, sometimes even driving them up to the front of the house. There was a sense of warmth, welcome and camaraderie. Actually, some lifelong friendships between Elvis fans began at the Graceland gates.

While, in general, things tended to be calm enough around here, it wasn't all that uncommon for fans and curiosity-seekers to climb over the stone wall or wood fence on a dare or, more often, with the heartfelt hope of seeing Elvis. The security staff had more than one occasion to politely escort uninvited guests off the grounds, sometimes having to summon them down from the trees. On one occasion Elvis happened upon a couple of mischievous young guys who had jumped the fence and were taking a swim. Elvis is said to have nonchalantly suggested that they be careful, then went on about his business. Once, an enterprising fellow actually made his way into the house and was found sitting in the den waiting for Elvis, hoping to interest him in some songs he had written, but he didn't get to have that meeting.

The most famous incident of wall jumping occurred one night in 1976. Bruce Springsteen, who was enjoying the first rush of great fame and had just played Memphis on his Born to Run tour, decided to catch a cab to Graceland. Noticing a light on up at the house, he climbed the wall and ran to the front door. As he was about to knock, Security interceded. He recalls asking, 'Is Elvis home?'. Answer: 'No, Elvis isn't home, he's in Lake Tahoe'. (It was true.) Springsteen attempted to impress the guards by telling all about his being a recording star and his having recently made the covers of Time and Newsweek, as he was politely escorted to the street. (Perhaps they didn't believe him or hadn't heard of him yet.)

The Night Bruce Springsteen jumped the wall at Graceland

What follows is Springsteen's narration, apparently recorded from one of his concert appearances:

'Back in '75, on the 'Born to Run' tour -- a little bit of history for you . . . We were down in Memphis, and I remember it was late at night, and I was sittin' in a motel room with me and my guitar player, Steve. We got a taxi to take us out to Elvis' house.

The Night Bruce Springsteen jumped the wall at Graceland, as told by Bruce in the intro to the performance of 'Follow That Dream' Live July 7, 1985.

'And it took us out there in the middle of the night, and I remember we got outta the cab, and we stood there in front of those gates with the big guitar players on 'em. And when we looked up the driveway, in the second story of the house, you could see a light on, and I figured that Elvis has gotta be up readin' or somethin'. And I told Steve, I said, 'Steve, man, I gotta go check it out.' And I jumped up over the wall and I started runnin' up the driveway, which when I look back on it now was kind of a stupid thing to do because I hate it when people do it at my house.

'Anyway, at the time, I was filled with the enthusiasm of youth and ran up the driveway and I got to the front door and I was just about to knock, and guards came out of the woods and they asked me what I wanted. And I said, 'Is Elvis home?' Then they said, 'No, no, Elvis isn't home, he's in Lake Tahoe'. So, I started to tell 'em that I was a guitar player and that I had my own band, and that we played in town that night, and that I made some records. And I even told 'em I had my picture on the cover of Time and Newsweek. I had to pull out all the stops to try to make an impression, you know. I don't think he believed me, though, 'cause he just kinda stood there noddin' and then he took me by the arm and put me back out on the street with Steve.

'Later on, I used to wonder what I would have said if I'd knocked on the door and if Elvis had come to the door because it wasn't really Elvis I was goin' to see. But, it was like he came along and whispered some dream in everybody's ear, and somehow we all dreamed it. And maybe that's why we're here tonight, I don't know.

'I remember later, when a friend of mine called to tell me that he'd died, it was so hard to understand how somebody whose music came in and took away so many people's loneliness and gave so many people a reason and a sense of the possibilities of living could have, in the end, died so tragically. And I guess when you're alone, you ain't nothin' but alone. 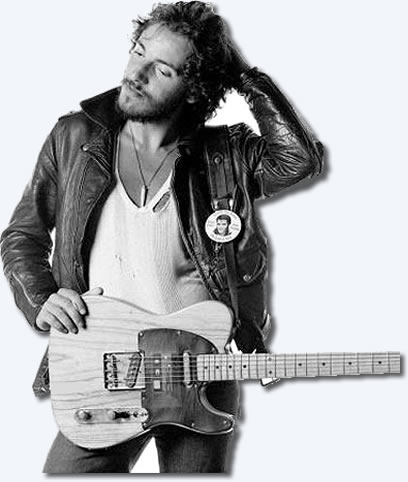 In Bruce's opinion, Elvis' real comeback occurred in 1972 with the release of Burning Love. 'That's when the jockeys woke up and found out that Elvis could still rock with the best of them'.

For those who don't know, the legend goes that Bruce and pal Steve Van Zandt caught Elvis' May 28, 1977 performance in Philadelphia. As Bruce later discretely recalled, 'It was not a good night'.

He apparently went home and wrote Fire as a salve for his sadness. It is unconfirmed if a demo was ever sent from manager Jon Landau to Elvis' management, producer Felton Jarvis, or Graceland, but the song is clearly a superb homage to the great early sixties recordings Elvis Presley made, in particular, Suspicion and His Latest Flame. In other words, it was an instant classic. After Elvis died Bruce gave the demo to rockabilly singer Robert Gordon, who cut it in New York in December 1977 with Link Wray on lead guitar and Bruce himself playing (uncredited-at-the-time) piano. Somehow, the Pointer Sisters got a hold of the track and recorded a more R&B styled version which made #2 on the pop charts in 1979. Elvis, of course, had loved their recording of Fairytale, cutting it in Hollywood in 1975. There's a little music circle for you!

Below are the lyrics. With that sinuous, sexy bass line running underneath, Elvis could have kicked ass with this tune. Maybe even hit #1 on the charts. Oh, if wishes were moonbeams.

You had a hold on me right from the start
A grip so tight I couldn't tear it apart
My nerves all jumping, acting like a fool
Your kisses they burn but your heart ... stays ... cool

Romeo and Juliet
Samson and Delilah
Baby, you can bet
Their love they didn't deny
Your words say split
But your words they lie

Burning in my soul
It's out of control