Barbara Hearn and Elvis: her story

Elvis was singing in the men's room. But I'd gotten used to that. This time, though, there was something new. And it led me, after all these years, to the legendary Barbara Hearn. A little explanation -- all right, a lot of explanation -- is in order:

There's a restaurant in Naples, Florida, called BrickTop's. I stop in there occasionally when I'm in town. In the men's restroom, every time I've gone in, Elvis Presley's voice is singing. Oddly, his voice is not heard out in the restaurant itself. But in the restroom, the voice is there nonstop. 'Are You Lonesome Tonight?', (Marie's the Name) His Latest Flame' ... the Elvis-in-the-men's-room playlist is rather eclectic.

The other night I was eating at the restaurant and, of course, Elvis was singing in the men's room. But there had been an addition to the restroom décor since my last visit six months or so ago. There was a framed, autographed photo on the wall, of a young Elvis smiling next to a dark-haired woman.

The autograph was hers. The signature: Barbara Hearn Smith. For Presley aficionados, the name Barbara Hearn is as historic as that of Martha Washington or Betsy Ross or Mary Todd Lincoln. She was Elvis' hometown girlfriend in Memphis at the beginning of 1956, just before his career hit the stratosphere. That was the year everything changed; by the time it was over, Elvis' old life was in the rear-view mirror. And part of that old life, presumably, was Barbara Hearn. But now, in the dwindling weeks of 2011, in the BrickTop's men's room, here was Elvis singing, and here was Barbara Hearn's autograph. A closer inspection of the handwriting revealed that she was saying she had dined at another BrickTop's, in Nashville, Tennessee.

So she still strides the American continent? I had to find her. I did -- at the Holly Tree Manor Bed and Breakfast in Trenton, Tennessee, which she and her husband of 50 years, Jim Smith, own and run. She's 74, and she laughed out loud when I told her where I had found her photo. 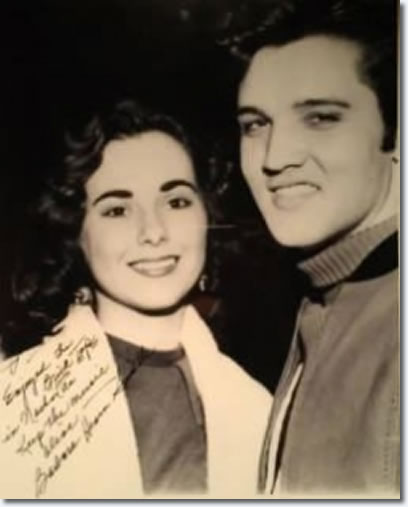 'Well, I suppose it's all right if my name is on a restroom wall', she said. 'It's better than if my phone number was up there'. She said that she and her husband had been having lunch at the BrickTop's in Nashville when a waiter had overheard them talking about Elvis. When he realized that she had actually known Elvis, he said that the boss of the place -- Joe Ledbetter -- was a huge Presley fan. Jim Smith went out to their car, where he knew there was a photo of Elvis and Barbara; he brought it into the restaurant, and she signed it so the waiter could give it to the boss when he came in. (I got in touch with Ledbetter, who runs all six BrickTop's locations, most of which are in the South. He told me he'd had copies made of the photo, and ordered that they be put in nice frames and hung in the men's and women's restrooms of all his restaurants. He said that the nonstop Elvis songs do not discriminate by gender: They are in the women's rooms as well as in the men's rooms. Why? He loves Elvis. Why not play Elvis' music in the restaurants themselves -- why just in the bathrooms? 'It would drive some customers nuts to hear it for so long. In the restrooms, you're just there for a few minutes.')

But back to Barbara Hearn: She said she first met Elvis when she was working at Goldsmith's Department Store in Memphis with a friend named Dixie Locke, who was dating Presley. When Dixie and Elvis went their separate ways, he asked Barbara if he could take her out.

But she was his girlfriend during his remarkable ascent in 1956.

There is a famous photograph, taken by Alfred Wertheimer inside the home on Audubon Drive in Memphis that Presley shared with his parents (this was pre-Graceland). In the photo, Barbara is prim in a white dress with dark polka-dots; Elvis is slouched and shirtless. 'People don't understand what's in that picture', she told me. 'He had just been outside standing in his new swimming pool. It was just being filled up, with a garden hose. I was dressed to go out with him for the evening, all gussied up. And what we're doing is, he had just taken the train back from New York, where he had recorded some new songs for RCA Victor. He had brought back the recordings -- they had not been released yet. We were listening to one of them. He wanted to know if I thought it was any good. I said yes, I thought it was. It was 'Don't Be Cruel'.

Barbara Hearn is a woman that Elvis dated on and off throughout the 1950s and 1960s, starting in high school. 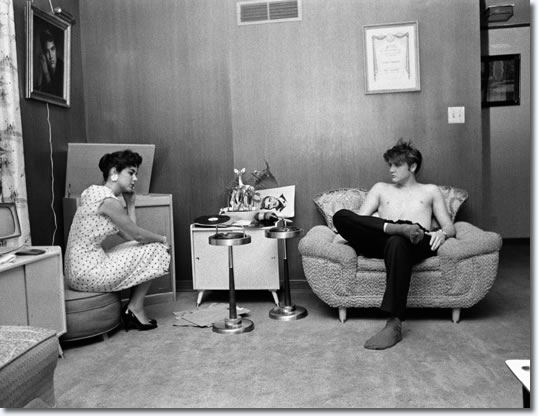 Above, after having taken a shower, and still bare chested, Elvis has his high school sweetheart, Barbara Hearn, listen on the phonograph to the acetate disc with cuts of his songs from the New York recording session. 1034 Audubon Drive, Memphis, Tenn. July 4, 1956. (Photo © Alfred Wertheimer. All rights reserved.)

Soon enough he went to Hollywood; by the end of that year, he would be bringing Natalie Wood to Memphis to meet his parents. ('I didn't hold it against him at all', Barbara told me. 'If the roles had been reversed, and I had been the one to go to Hollywood and I'd met Gregory Peck, I would have brought Gregory Peck back to Memphis with me.') She eventually went to work in Washington for one of Tennessee's U.S. senators, Estes Kefauver. It was there that she met her future husband. She saw Elvis only infrequently over the years, and never lost her affection toward him. 'That year of 1956, I saw him go from being barely famous to a super-duper star', she said. 'From a boy to a man'. And now, more than half a century later, there they are, in the restaurant restrooms, accompanied by the sound of his voice. She said she'd had no idea, until I told her. 'What a hoot', she said, and laughed again. 'He's a friend who never stops giving'. 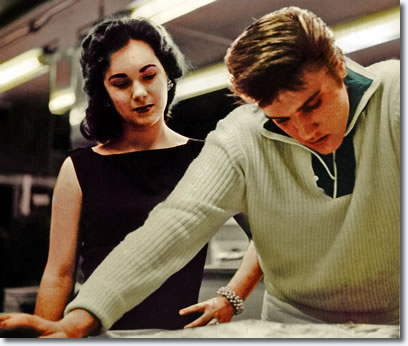