Dixie Locke Emmons was a close girlfriend of Elvis' from early 1953 until October 1955. Dixie was dating Elvis Presley in 1954, but her favorite singers at the time were Dean Martin, Frank Sinatra and Peggy Lee. Elvis had been drawn to Locke's church, First Assembly of God, because of his love of gospel music and the Blackwood Brothers Quartet, which sang at the church. On January 24, 1954, Fourteen-year-old Dixie noticed Elvis at a church function and making sure he overhears, she made plans with a girlfriend to go roller-skating the following Saturday night. 'I thought he was the most gorgeous thing I'd ever seen. He was a very shy person, but when he started singing he put so much into putting the music across that he kind of lost himself. He threw himself into it completely', she says.

The following Saturday, Elvis went to the Rainbow Rollerdome, where he 'bumped' into Dixie, speaking to her for the first time. He drives her home in his 1941 Lincoln.

On February 16, Barely two weeks after their first meeting, Elvis brought Dixie home to meet his parents. On February 26, Elvis and Dixie attended the all-night Gospel singing at Ellis Auditorium together for the first time. Elvis and Dixie will see each other virtually every day throughout the summer, going to the movies two or three times a week. On June 3, 1954 Dixie left Memphis for a family vacation in Florida.

Before the movies and record deals, the Memphis heartthrob fell for a girl from church.

Dixie Locke Emmons was 15 years old when she spotted Elvis Presley at the First Assembly of God in Memphis. At 19, the future King of Rock had a start in his career thanks to a recent recording with Sun Records, but that didn't stop him from pursuing love. The following first-person account from Emmons is reprinted with permission from Blue Suede Shoes: The Culture of Elvis (Glitterati).

I had some very good, close friends at the high school. Friday or Saturday night, we'd go to the skating rink. We did that pretty regularly. I had seen Elvis at church. He had started coming to the church where I had been all my life, but we had not actually spoken to each other. We would notice each other in Sunday school class. One Sunday at church, he and some of the guys were standing together, and some of my girlfriends and I were standing talking. I saw him and I went in earshot so he could hear what we were saying. I said for his benefit that we were going skating out at Rainbow Skating Rink the next weekend and I mentioned what day we were going and what time it started, hoping he'd take the bait. The next weekend when we got there, he was there. We had not talked all week. We had not said 'Who are you?' or 'What's your phone number?' or anything. 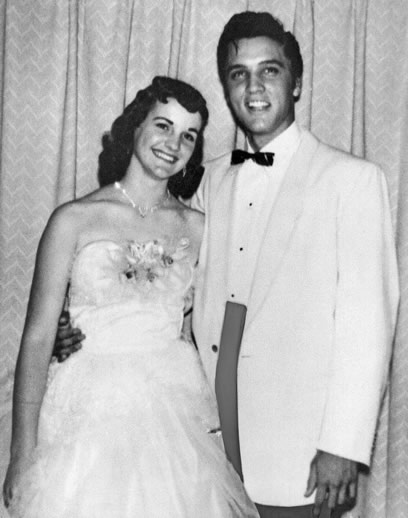 Dixie Locke and Elvis Presley at her junior prom in Memphis, May 6, 1955.

He had gotten there before we had and had his skates on. He had to rent skates. I already had my skates because we went pretty often. He was standing there holding onto one of the poles. He wasn't really a skater. As soon as I saw him, it made me feel good because…I felt like he was there to see me. I skated up to him and said, 'I don't know if you know who I am. My name is Dixie'. He said, 'I know who you are. I'm Elvis'. That was our introduction to each other.

I didn't say I was hoping he would be there or ask whether he had heard us talking about going skating because I knew that's why he came. We sat and talked a lot, not the whole time because I would get out and skate and do things with my girlfriends. Every time I had a break or after a song, I'd go over and sit with him and we talked. It wasn't that we didn't exactly know each other. I said I'd seen him at church. I felt like we had a great deal in common even then because of our church connection. The Blackwood Brothers had moved to Memphis from Iowa and started coming to our church. We both loved gospel music. We had a lot to talk about on that subject. He had just graduated from high school, and I was still in school. It was a teenage conversation. We enjoyed each other's company so much that when it was time to go home after the first session, I think it was over at 10:00, we decided to stay for the night session for the next couple of hours.

I did not have permission from my parents to stay for the night session. I told my girlfriends that I was going to stay because Elvis asked if he could take me home. I didn't want to go home right then because we were enjoying talking with each other and getting to know each other. There was a little concession stand at the skating rink. I told Elvis that I had to go in and call my parents to see if I could stay for the night session. I went over to the phone and acted like I was calling my parents. We didn't even have a telephone, which was so strange back then. My aunt and uncle lived next door to us, and when we wanted to use the phone, we went to their house. I acted like I was calling my parents and said I was staying for the night session if that was ok and a friend from the church was going to bring us home. I think it lasted 'til twelve. I acted like I had been given permission by my parents. 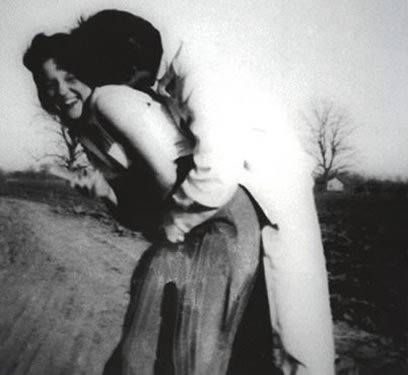 We talked and stayed for a little while. Then we went to a drive-in down in South Memphis, which was where I was from - the south part of town. He was from the north, not too far from where I lived. We just sat and talked, and he told me about his job, about his family. It was kind of not strange because we both felt like we already knew each other. We had so much in common. Our families were so similar in that they were hardworking people. My mom was a stay-at-home mom. We had a nice time talking and getting to know each other. He asked me if I could go out the next week when he took me home. I told him yes and I gave him my aunt's phone number. I said, 'You'll have to call, and I'll have to see what my parents say about it'. He was just a nice, handsome guy. There was a magic kiss that night when we got home. It was almost casual. I had to sneak into the house because my parents were sleeping.

He called two or three days later, and my cousin came over from next door to tell me someone was on the phone for me. We started going together in January '54, and we dated pretty steadily until his first record was released. We were together three or four nights a week. From January '54 until we went to the prom together in '55 - we were still dating then. He was traveling. He was traveling a lot by that time, but he came home for my prom in '55. By that point, he had so many demands and such a busy schedule. He also came to my graduation in '56. We kept a good close bond with each other. We had talked about getting married, but by the time his records came out, we realized that wasn't going to happen.

July 18, Late in the evening, the Locke family returns from their Florida vacation, and while driving into Memphis Dixie hears 'Blue Moon of Kentucky' on the car radio. She knew Elvis had been recording at Sun Records. 'I knew what was going on, but neither he nor I had any idea of the magnitude of it. I got a telegram from him saying, 'They're playing my records on the radio'. He was ecstatic over it. It was almost like disbelief that the disc jockeys would even play it', says Dixie Locke, now executive secretary of the church.

Dixie dated Elvis for about two more years during which he played small concerts and clubs. 'I don't think there was a whole lot of money involved in it. In the first weeks and months, it was more like hometown boy makes good'. 'He was still just totally innocent and spontaneous. There wasn't a proud or conceited bone in his body'.

Elvis attended the junior and senior proms with Dixie Locke in 1954 and 1955 at South Side High School. Afterward, they slowly drifted apart. 'It was kind of a mutual thing. His career was going in one direction, and I didn't feel that I could be a part of it. His career kind of consumed him there, and there wasn't much time for anything else'. Dixie Locke later married and is now known as Dixie Locke Emmons.

In the DVD 'Elvis Presley Classic Albums' Dixie Locke has some lovely recollections about the period and we are treated to some fascinating old film of Memphis & Beale Street as well. Some great church footage also helps to demonstrate just how important Gospel music was to Elvis' new sound.

For years, Dixie Locke wouldn't do interviews. She didn't want to cheapen the memory of her first love, nor did she want to let it become the event that defined her. And she certainly didn't want to open her private life to public scrutiny, having seen what too much of that can do to a person. It was Peter Guralnick who finally convinced Dixie Locke to go on the record, and in 1990 the two of them sat down with a tape recorder in the basement of the same church she and Elvis had attended as teenagers. She told him the entire story, from the night she met Elvis at the Rainbow Rollerdrome to the last time she saw him, at Graceland the day after his mother's funeral. The interview became a cornerstone of Guralnick's landmark two-volume Elvis biography, Last Train to Memphis (1994) and Careless Love (1999), books that managed to humanize a man the rest of the media had been able only to deify or caricature. 'I think it was one of the most emotional interviews I've ever done', Guralnick says. 'She was so honest, and she told the story so eloquently. Afterward, it was almost as if we both slunk away from the church basement like we had done something wrong. Because it had that degree -- I think at least from my perspective -- it had that degree of emotional investment'.