Dolores Hart, the woman who gave Elvis his first on-screen kiss is asking for $9 million to restore her crumbling abbey. The most recent version of the renovation plan, dubbed New Horizons, calls for a new chapel (the ceiling is sagging), housing and other environmentally friendly and disabled accessible spaces to live and pray. More than anything, they need more space - common areas and places where people can reflect without bumping into one another. They have no conference room and currently no way to walk inside from one end of the monastery to the other without going through the chapel and disturbing those who are praying there.

In the late 50s, early 60s, Dolores Hart played in 10 movies together with big names like Elvis Presley (Loving You, King Creole) and Anthony Quinn. The former actress who walked away from Hollywood in 1963 to become a nun spun her tale into a fundraising campaign for monastery of the Benedictine Abbey of Regina Laudes in Bethlehem, Connecticut.

Mother Dolores, now 76, first shared her story with The Associated Press in 2011 as she and about 40 other members of her Benedictine order faced the possibility that their abbey in Bethlehem would close.

In the documentary God Is The Bigger Elvis she gave a unique insight into the daily life of the Benedictine Abbey. There are 36 nuns who lead a strict life of prayer, study and work in silence on the farm. Nowadays Prioress Dolores Hart after Mother Superior, the second in command of the abbey. 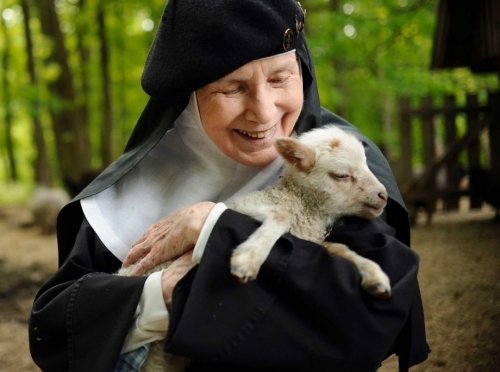 After her autobiography a large amount of donations were raised, but the on going costs are still huge. She hopes now for to be able to help raise more donations to save the abbey for future generations.

Among other things, the nuns need to install new wiring and insulation to prevent the constant freezing of pipes in the winter, fix the falling gutters, replace rotting wood and get rid of the black mold that can be seen growing on the ceiling of the former barn that now houses the print shop, bakery and sewing room.

Buy God Is The Bigger Elvis

An Interview with Mother Dolores Hart