Elvis was one of thirteen inductees that day. Among them were Farley R. Guy, Elvis' old friend from his days living at Lauderdale Courts, as well as Donald 'Rex' Mansfield and William R. 'Nervous' Norvell, who would become close friends to Elvis during his Army service. As their military bus pulled out of Memphis from Kennedy Veterans Hospital headed toward Ft. Chaffee, Arkansas, hundreds of fans in an endless caravan of cars escorted them across town and over the bridge into Arkansas. Many would follow all the way to Ft. Chaffee.

After processing at Ft. Chaffee, six of the thirteen, Elvis included, were given orders to report to Ft. Hood, Texas for basic training. Ft. Hood is located near Killeen, Texas and was named in honor of Confederate General John Bell Hood and his renowned Texas Brigade. General Hood was a distant ancestor of Elvis on his paternal grandmother Minnie Mae Hood Presley's side. Elvis received basic and advanced tank training at Ft. Hood serving with the 2nd. Armored 'Hell On Wheels' Division made famous by General George Patton during World War II. (General Patton was someone Elvis admired his entire life and Elvis would often quote him.)

After training at Ft. Hood he was transferred to the 3rd. Armored Division 'Spearheads' in Germany.

Colin Powell served a long and illustrious career in the U.S. military and is today a respected statesman currently serving as Secretary of State in the George Bush administration. In his memoirs 'My American Journal', Powell tells of relating Army stories to his children 'who only perked up at one story'. The story was of his serving in Germany as an Army lieutenant in 1960. He recalled one day on maneuvers:

'Hey, Lieutenant', one of my men shouted. 'Come on over. Look who's here'. I walked over to the jeep, where a grimy, weary-looking sergeant saluted me and put out his hand. It was Elvis Presley.

That their father had shaken the King's hand astonished my kids.

What impressed me at the time was that instead of seeking celebrity treatment, Elvis had done his two-year hitch, uncomplainingly, as an ordinary GI, even rising to the responsibility of an NCO'. 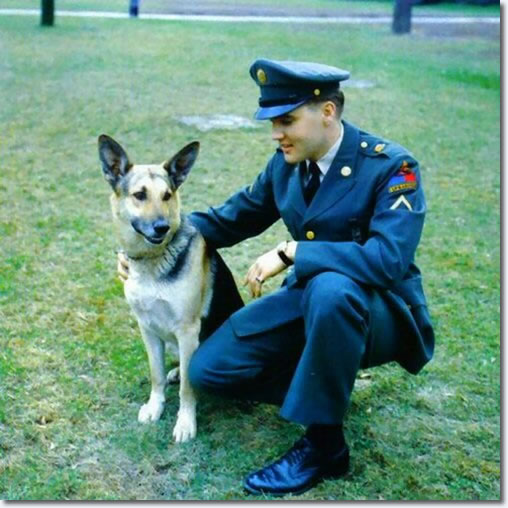 The G.I. Blues of Elvis Presley

Photos - Elvis in the U.S. Army in colour

Elvis wanted to be just one of the GIs