Elvis wanted to be just one of the GIs

I was a chaplain with the Third Armored Division in West Germany. Elvis Presley, then serving in the Army in Texas, was sent overseas to join the division. My first contact with Elvis was when he went to a local military movie theater to see his most recent film, 'King Creole'. There was such a mob to greet him that a near-riot broke out. Military police had to escort him out of the theater.

Elvis was a very religious person and he wanted to attend Sunday services in the military chapel. However, it was decided that this was not advisable because of the that his presence would cause. The problem was that several hundred dependents of the military families who lived in the area were intense Elvis fans.

When Elvis was promoted to Specizalist 4, he was eligible to live off post. He rented a large home (called a villa) in the nearby town of Bad Nauheim. Every afternoon hordes of fans, mostly teenagers, were waiting for him when he arrived home from his duty. He usually stood in the door for a while and signed autographs.

Well, shops in nearby towns carried postcards and photographs of Elvis. They were already for sale before he arrived in Germany. Fans bought these cards and pictures of Elvis and asked him to sign them.

My young sons, Coleman and Donald, took advantage of this opportunity.

They went back and stood in line several times until they secured extra signed cards, most of which they traded at school for baseball cards, comics and other items.

One encounter I had with Elvis was certainly one to remember. My home base was in Butzbach, where I preached in my chapel and served the needs of the military and their families. I was often sent to Grafenwoht, a couple of hundred miles across Germany, for field duty with the troops in training. Grafenwoht was located in East Germany near the Czechoslovakian border. This had been Hitler's training ground for his troops. 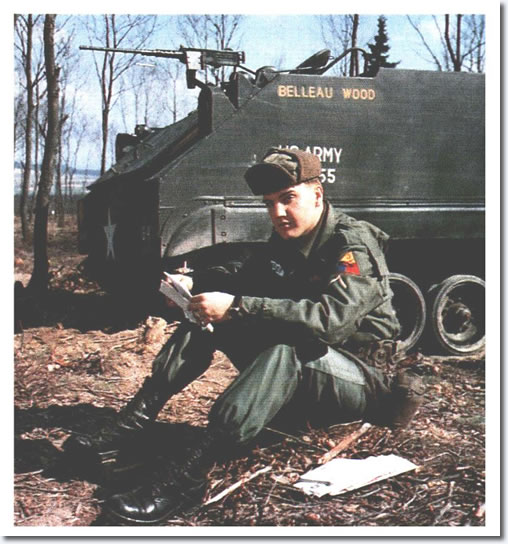 I was billeted in the former German officers' club where Hitler's elite officers of the Luftwaffe were housed. Late one night I arrived in my Jeep after visiting soldiers in the field. My driver stopped to let me out at the entrance of the club. As I stepped out of my Jeep, unbeknownst to me, another Jeep pulled alongside.

The driver stepped out with his back to me and accidentally stepped on my foot. He jumped back, saluted me and quickly apologized. It was Elvis Presley! After a brief conversation, we went our separate ways.

Elvis was the Jeep driver for his company commander. He was well-liked by his fellow soldiers and asked for no special favors. He also declined to be assigned to special services because he felt this would be like 'show business' and not allow him to be a real soldier. Incidentally, soon after he arrived in Germany he bought a TV for the dormitory that he shared with several other men. 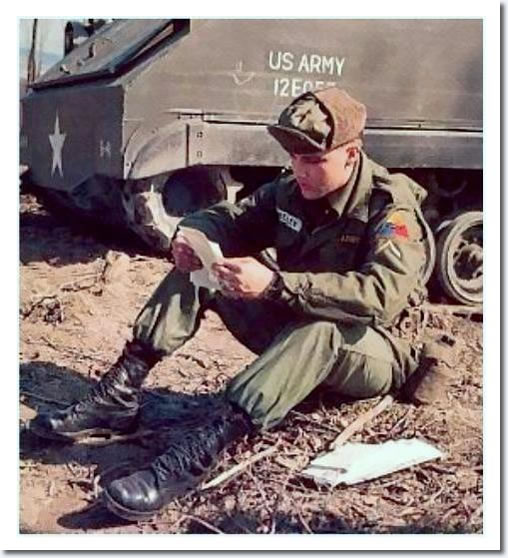 After my family and I moved back to the States, I was released from the Army. I moved to Memphis where I was called to be the editor of the Brotherhood Commission of the Southern Baptist Conversion.

I visited Elvis at his famous home, Graceland.

Also, I was a speaker at a youth service at Bellevue Baptist Church.

During my message I told about my encounters with Elvis in Germany, as I knew among these hundreds of young people there would be Elvis fans. At the end of the services, several teenagers came zto me asking questions about Elvis. Two young girls lingered behind to talk to me, they had a request -- they asked me to allow them to touch the foot that Elvis had stepped on.

And my wife, Sarah, had her own Elvis tale. She went almost every Saturday to a beauty parlor, Patricia's Little Sister, at McLean and Madison in Midtown. The owner had been Elvis' hairdresser. He traveled with Elvis to Las Vegas, Hollywood, New York and other places to do his hair for his shows and concerts. He told my wife about his adventures with Elvis and about meeting other famous people. One time Elvis dropped by the beauty shop and handed the owner the keys for a white, deluxe Cadillac. Sarah saw this car parked in front of the shop most of the time whenever she went to get her hair done.

Photos - Elvis in the U.S. Army in colour