Interview with Wink and Sandy Martindale

Wink Martindale was the morning DJ at WHBQ in Memphis. Wink Martindale was born Winston Conrad Martindale on December 4, 1934 in Jackson, Tennessee, USA. He is perhaps best known as a game show host for such classic shows as Gambit, Tic Tac Dough, High Rollers, and Debt.

The evening DJ, Dewey Phillips, was known for playing what was then called 'race music', and it was one evening that a record brought in by Sam Phillips featuring an artist by the name of Elvis Presley was played.

'You could tell that something exciting was going on when the record was played', says Wink. Elvis appeared on Wink's 'Teenage Dance Party' show on June 16, 1956 to promote his July 4 charity show at Russwood Park in Memphis -- it was the first of two television interviews Elvis did with Wink. 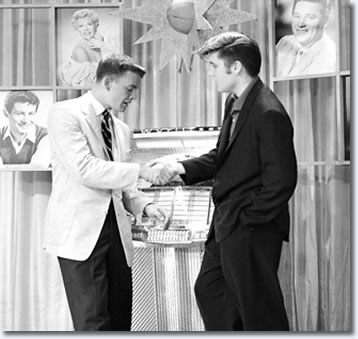 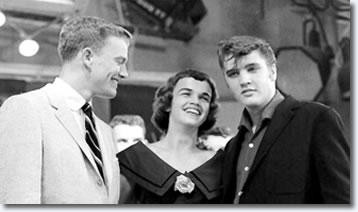 Wink and Elvis remained friends for a long time.

Ironically, Wink's future wife Sandy had dated Elvis for six years. Sandy Martindale has fond memories of Elvis: 'My mother came with us on our first dates', chuckles Sandy. 'I was so embarrassed I cried'. 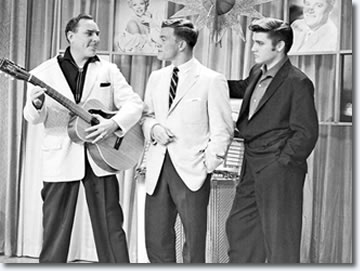 Sandy's romance with the King began at age 14, when Elvis was bowled over by the photo, which he spotted hanging in the office of her dad, a Los Angeles nightclub owner.

'He called me to go out, but I had to tell him I had school the next day', she recalls. 'The next night Mom drove me to the club to meet him. Elvis had a date with a gorgeous actress that night and there I was, with my little ponytail. He was 24. He held my hand, kissed me on the cheek and I was a goner'.

They were an item, on and off, for the next six years --- right up until he married Priscilla.

'I danced in six of his movies because I was going with him', she says. 'In Viva Las Vegas that's me with Ann-Margret and Elvis dancing at the roulette table'. Even after Elvis married, he and Sandy stayed friends. She says she was devastated the last time she saw him, back-stage at one if his last Las Vegas concerts.

Above - In 1956 Wink interviewed Elvis on his Dance Party TV Show. Elvis spent the interview leaning against a jukebox, while his hair flopped over his forehead sending new feelings through teen-age America.

Above - Wink tribute to Elvis.

Interview with Wink and Sandy Martindale (2007)