Elvis Australia was lucky enough to spend some time with Myrna when she was in Australia on several occasions. She was an absolute delight to socialise with, always full of life, happiness and a wonderful positive person to be around. Myrna Smith was a key member of the group 'The Sweet Inspirations'.

Myrna Smith is one of the original Sweet Inspirations, the backing group who sang with Elvis in concert from 1969 until the end. The Sweet Inspirations had success with R&B, gospel and pop recordings of their own, most notably their first hit single Sweet Inspiration, which gave the group their name in the late sixties and earned them a Grammy nomination. It was that song that caught the attention of Elvis Presley, who signed them to provide backing vocals and be an opening act for his record-breaking 1969 Las Vegas engagement, his official return to the live concert stage after his triumphant '68 TV special and the end of his Hollywood movie contract obligations. No audition was required. The Sweet Inspirations met him when they arrived for the first rehearsals for the '69 engagement. The 'Sweets' worked with Elvis in Vegas, on his national concert tours and on recordings from 1969 to 1977. Myrna also backed Elvis up during his 1976 Graceland recordings, both in February of that year, and in the October/November sessions, resulting in two albums. 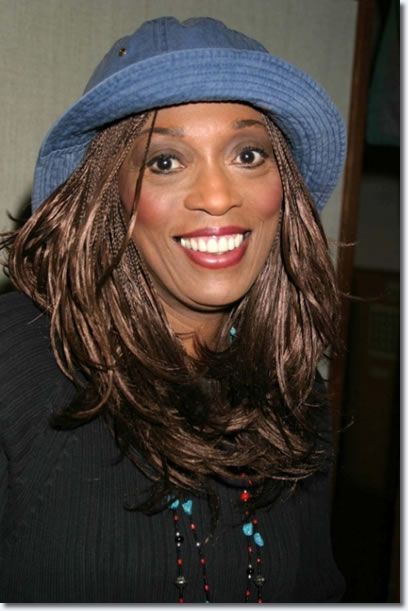 The Sweet Inspirations were founded by Cissy Houston (aka Emily Drinkard), mother of Whitney , and sister of Lee Warrick (herself the mother of well-known sisters Dee Dee and Dionne Warwick). Emily and Lee were members of The Drinkard Singers, a family group that had the distinction of recording the first Gospel album to appear on a major label: A live recording from The Newport Jazz Festival in 1959. The line-up included Judy Guions (who later became Judy Clay), Marie Epps, Larry Drinkard, Nicholas Drinkard, Ann Moss, Lee and Emily.

The Sweet Inspirations had evolved from the Gospelaires group. This original backup group that was so in demand among producers, publishers, artists, and songwriters in the early '60's included Myrna's cousins Dionne and Dee Dee Warwick, Doris Troy and Judy Guions (later Judy Clay). With both Doris and Dionne enjoying solo careers with hits (Just One Look and Don't Make Me Over respectively, both of which the 'Sweet Inspirations' can be heard on) in 1963. At that time, Sylvia Shemwell (sister of Judy Clay) replaced Doris; while Cissy Houston took over from Dionne, with Dee Dee Warwick as the group's official leader. The group sang backup for many stars, including Wilson Pickett, Solomon Burke, Esther Phillips and Aretha Franklin. Dee Dee left in 1965, when her solo career began to take off. She was replaced by Myrna Smith. Estelle Brown joined the team soon after, and the line-up that was to become an Atlantic recording group was set.

The Sweet Inspirations continued to work as sessions singers during this period, appearing on classic cuts by artists as diverse as Aretha Franklin (Chain of Fools), Dusty Springfield (Son of a Preacher Man), Van Morrison (Brown Eyed Girl) and Jimi Hendrix (Burning of the Midnight Lamp).

The Sweet Inspirations recorded by themselves for the first time in April 1967 for Atlantic Records. That session produced the first two singles released by Atlantic, a version of Why (Am I Treated So Bad), a song previously recorded by 'The Staple Singers' and a soulful version of Let It Be Me, a French song which had been a pop and R&B hit for Betty Everett & Jerry Butler in 1964. Though their first singles lacked much chart success, Atlantic was committed to the group, and an August session in Memphis yielded the bulk of songs used for the group's self-titled debut album, released in the late fall of 1967. The groups most successful song was Sweet Inspiration, which was cut during a two-day session at American Sound in Memphis in August 1967. The track hit number five on the R&B chart and was a top 20 pop hit. The song also cought Elvis Presleys attention.

Within a month of their chart climb, the group began work on their second album - a gospel record entitled Songs Of Faith & Inspiration. It was released in 1968 under the name 'Cissy Drinkard & The Sweet Inspirations'. Cissy's last recording session with 'The Sweet Inspirations' was in October 1969, since she wanted to pursue a solo career and concentrate on her family. The session produced the group's biggest R&B hit in some time. A Gamble & Huff composition, Gotta Find Me A Brand New Lover .

Born in Newark, New Jersey. Myrna Smith began singing at the age of five she when she sang Jesus Loves Me with her fathers gospel group, on 'The Sons of Harmony Radio Show'. By the time she was 8 years old, she was singing in a youth group called C.H. Walters Choir. She became a high school English teacher in South Brunswick, New Jersey in the 1960s, while she also pursued her singing career.

Myrna was still making records with the Sweet Inspirations during her period with Elvis, but with limited commercial success. However, following Elvis' tragic death, they backed Frankie Valli on his number one single 'Grease'. They also toured with the Bee Gees and released the disco album 'Hot Butterfly' in this period, but with the record achieving limited success the group decided to break up.

After years apart, the Sweet Inspirations reformed in 1994 and continued to perform up until recently.

The Elvis association in particular assured them regular work, including touring with the 'Elvis: The Concert' show, which featured Elvis on screen and his original backing band playing live.

Myrna developed pneumonia while on tour in Europe with 'Elvis: The Concert' in March of this year. She subsequently suffered from kidney failure and a severe stroke. Myrna spent her last weeks at the Canyon Oaks Nursing & Rehabilitation Center in Canoga Park, California.

Myrna was a great soul singer whose voice was featured on some of the finest records of the second half of the 20th century. She was also an important part of Elvis' concerts in the 1970s. She was married previously to Jerry Schilling from 1982-1987. She is survived by her son, Martin (b. 1968), and several relatives.

In March 2010, while on a European tour for Elvis: The Concert, Myrna Smith developed pneumonia. Once back in the U.S., her condition continued to deteriorate, as she suffered kidney failure, further complicated by a severe stroke. By October 2010, she is a patient at the Canyon Oaks Nursing & Rehabilitation Center in Canoga Park, California. She passed away in Canoga Park, California, as a result of a stoke, and kidney failure.

Myrna was 69. She was a warm and friendly person. She will be missed by all that met her. 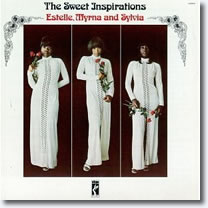 Of all the many female groups that first gained popularity in the '60s, The Sweet Inspirations could likely claim a number of important distinctions: as session singers, the unit of Cissy Houston, Myrna Smith, Estelle Brown and Sylvia Shemwell probably sang on more hit records than any other group of background vocalists; in terms of sheer soulfulness, The Sweets were virtually peerless; and with few exceptions, the quartet was easily one of the most underrated female recording teams of their time. Even with the compact disc revolution, little of their wonderful work for Atlantic Records has been available: a 'Best Of' collection was issued through the Ichiban Soul Classics series I was proud to produce in 1994 but has been out of print.

Currently available is the CD, The Sweet Inspirations : Estelle, Myrna, and Sylvia. On this 1973 release on STAX records the Sweet Inspirations manage to put together a winner of an album. With lush ballads ('Wishes & Dishes', & 'The whole world is out') and groovy blues tinged singles ('Slipped & Tripped' and 'Pity Yourself'). Also on this cd is their signature song Sweet Inspiration featuring Cissy Houston. 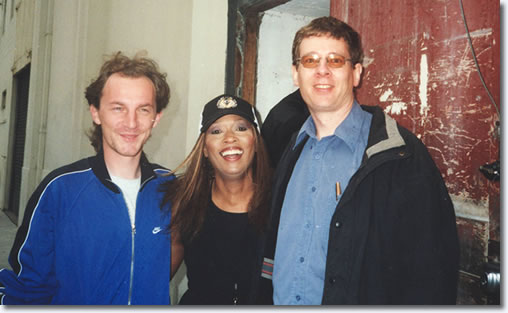