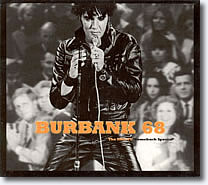 Burbank '68 is composed of two main parts: rehearsals recorded in Elvis' dressing room at NBC (June 25), and the majority of the 8 p.m stand up show (June 29). The first half starts off with a 5 minute 'intro', which are the two instrumentals of Danny Boy and 'Baby What You Want Me To Do' (aka Walkin' The Dog). Then Elvis launches into the songs that were all later done in the two sit down shows except for 'Blue Moon Of Kentucky'. For apparent reasons, Elvis chose not to perform the flip side to his very first single as the key was too high and was straining his voice. Hence this is probably the most interesting song on the disc, as the other rehearsals are done similarly to those performed two days later. The only differences being sung somewhat more looser and in much poorer sound quality. Also, the occasional additional noises made by Elvis' friends can be annoying at times. Nevertheless, the two dialogue tracks are probably the main highlights on this disc (around 5 minutes). Here we have Steve Binder outlining the informal section of the show (sit down shows) with Elvis exchanging his own ideas and joking with his original band.

All the rehearsal tracks are from June 25, yet the producers have inserted Baby What You Want Me To Do (track 9) from June 26. Why they decided this, one can only guess, though considering there is space for a further 24 minutes on this CD they should have added much more. For example, 'When It Rains It Really Pours' (June 24) released on Memories, and 'I Got A Woman' (June ?) from on the Platinum box set would have slotted in nicely. Maybe the rehearsals from the 24th and 26th are being held back and possibly released in the future.

The second half of this CD contains 9 tracks from the two stand up shows, 7 of which are from the 8 p.m show. The first 4 songs are previously unreleased and we get to hear Elvis miss his cue on 'Heartbreak Hotel', with some amusement. However, the 8 p.m versions of Blue Suede Shoes and Trouble / Guitar Man from the Memories release should have been on here instead of the 6 p.m versions. In other words, why the two stand up shows could not be released (on two CDs) as they were initially recorded deserves an explanation from the Follow That Dream Collectors label producers (Ernst Jorgensen & Roger Semon).

Added on the end is the alternate vocal take 4 of 'If I Can Dream', which sounds the same as the released version. To finish the disc is a 1 minute instrumental of 'Let Yourself Go', that originally closed the Comeback Special, pushing the running time up to an unsatisfactory 50 min: 58 sec.

The cheap cardboard packaging combined with a short tracklisting and few highlights (not to mention expensive cost) make for a disappointing first release on the Follow That Dream Collectors label.

In spite of that, it is a step in the right direction (after 22 years), and hopefully future releases will be better organized and more complete.

An In-depth look at the Elvis : '68 Comeback Special