Elvis Presley's self-titled first LP is unarguably one of the most important albums in rock history. Not only is it the first album by the genre's most successful and influential figure, but it is also the first genuine smash LP of the rock era. Its success in the spring and summer of 1956 would signal that it would be the long player and not the single that would come to dominate the sixties and onwards.

The album itself, featuring one of the most famous photos in Rock history on its cover, is actually a grab-bag affair consisting of a handful of left over Sun sides and a half dozen or so newly recorded RCA tracks. The famed singles from those initial sessions in the early part of 1956 ('Heartbreak Hotel' and the B-Sides 'I Was The One' and the stunning 'My Baby Left Me' among them) would not be included on the original album although they are included on the regular CD releases and the deluxe Double FTD set. 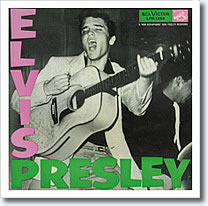 The album, featuring Elvis' regular sidemen Scotty Moore, Bill Black and D.J Fontana joined by ace session men Chet Atkins, Shorty Long and Floyd Cramer, would be recorded in two marathon sessions that lasted over several days in January and February of 56. While not his most consistently great album, the tracks Elvis recorded in these sessions have gone on to influence everyone from The Beatles to The Rolling Stones.

The album gets off to a roaring start with Carl Perkins' vicious ode to non-conformity, 'Blue Suede Shoes' (a song that helped define Rock and Roll as much as any other). Featuring a go for the throat vocal take by Elvis and the band in absolutely pulverizing form, 'Blue Suede Shoes' is a searing classic with Scotty Moore's charging and inventive guitar licks leading the way.

That stomping opening is followed by one of the most underrated ballads of Elvis' early career, Don Robertson's 'I'm Counting On You'. Elvis delivers such a subtle and genuine vocal here that it is near impossible to imagine anyone else singing it. Featuring some wonderfully expressive Cramer piano fills and the backing vocals of Gordon Stoker, 'I'm Counting On You' is a devastating reminder to how many hidden gems are in Presley's huge catalogue.

The disarming 'I'm Counting On You' is followed by a cover of Ray Charles' 'I Got A Woman', one of Elvis' favorite songs and another one of the great rock records of the fifties.

I have always imagined this song as less a confession of adultery and more a last minute attempt at keeping a lost love with the fabrication of another. While perhaps lacking the passion of Charles' original, Elvis vocal is still fiery, totally believable and is highlighted by some speaker destroying drumming by Fontana.

'One Sided Love Affair' follows, one of the album's slighter moments, but in its own way it is one of the most charming. Featuring Elvis' trademark (and underrated) propulsive rhythm guitar playing and some more jolting Cramer chords, the song becomes a tongue in cheek church-like revival affair that is incredibly fun to listen to.

'I Love You Because', a Sun Side written by Leon Payne, shows Elvis at the very dawn of his career. His vocal is all heart here and he hasn't yet perfected his unmatchable style. Still, the song is a beauty and hearing Elvis this raw with Moore's subtle and sweet guitar playing right next to his vocal is chilling stuff.

Another Sun track follows and it is one of the great ones.

Cow-Punk twenty-five years before anyone called it that, Bob and Joe Shelton's 'Just Because' is a sneering and angry barrel of venom and Elvis delivers it perfectly. Moore's playing is inspired again and the trio of Presley, Black and Moore (no drums on this one folks) sounds like the opening chapter to X's Wild Gift almost thirty years before they recorded it. It's a masterpiece of fire, spit and simplicity.

Yet another Sun track is up next, but who's complaining as 'Trying To Get To You' is one of the great Fifties tracks from Elvis or anyone else you care to name. Heartfelt, aching and soaring, Charles Singelton's and Rose McCoy's driving ballad is one of the most moving and masterful in all of Elvis' catalogue. He knew it too and he would return to it time and time again, most notably in the fateful years of 1968 and 1977.

Joe Thomas' 'I'm Gonna Sit Right Down and Cry Over You' had originally been recorded by Elvis at the Louisiana Hayride in 1955 and this two minute studio cut is solid if not up to par with the best tracks on the album. Atkins and Cramer really take over here and it is pleasant enough listen although it lacks the fire of the rest of the LP.

Jim Wakely's 'I'll Never Let You Go (Little Darlin)' is another echo drenched Sun track and it's spine tingling in its execution and meaning. Elvis sounds near possessed in how lost he gets in the tune in the first half which makes the surprising tone shift near the end sound almost shocking.

One of the great moments in recorded sound follows with the Sun side 'Blue Moon'. This Rogers and Hart standard that has been recorded by everyone from Bing Crosby to Jack White is, to quote Elvis Costello, 'Positively supernatural' in Presley's hands. It's hard to imagine anyone doubting the genius of Elvis Presley after hearing this numbing and sublime track. Director Jim Jarmusch would use it to devastating effect three decades later in his 'Mystery Train', one of the best films of the eighties.

The album closes with Jesse Stone's 'Money Honey' and the journey from Sun's Hillbilly Cat to RCA's fiery Rock and Roller is complete. Elvis is at is hiccuping and snarling best here, with the song sounding like a sizzling hot house of sin, sweat and salvation all neatly wrapped up in a two minute plus grinding burlesque classic. Moore's guitar is particularly menacing and Elvis' confidence explodes from the speakers…a stunner.

The album would have a massive impact and it would only be improved upon with Elvis, the more cohesive and powerhouse follow-up LP. The Clash would famously lift the cover photo for their mammoth London Calling double platter in 1979 and Joe Strummer would speak of his love for Elvis Presley.

Elvis Presley is best heard on the Double set FTD release that includes great re-mastering, a terrific booklet, all the singles and a ton of outtakes. The CD is solid and more reasonably priced for what you get.

Heartbreak Hotel
I Was The One
Lawdy Miss Clawdy
Shake Rattle And Roll
My Baby Left Me
I Want You, I Need You, I Love You

Elvis On Screen: A Dozen Favorites

Jeremy Richey is a student at W.K.U. who earned his English Degree and is working towards another in History.

He has a lifelong interest in film and music.