The original 1961 album release of 'Blue Hawaii', had 14 songs on it. Now this expanded 2 CD version from FTD has all these plus a multitute of interesting alternate takes. Is that good or what? And most of the extra tracks have never been released before. This is something that is quintessential to every Elvis fan. 'Blue Hawaii' features the title song, 'No More', 'Can't Help Falling In Love', 'Rock-a-Hula-Baby', 'Moonlight Swim', 'Hawaiian Wedding Song' and more. 'Steppin' out of Line', the original, was one bonus track that was already released. It was released one year after the original 'Blue Hawaii' album came out on 'Pot Luck'. By the way, be sure to get that one as well. This is an outstanding job RCA did on this! 'Dreams come true in blue Hawaii, and mine could all come true, this magic night of nights with you'. (Elvis Presley). Elvis rocks all the way!

Blue Hawaii is certainly one of Elvis' best soundtrack albums from the 60's and was his biggest hit album. It stayed at number 1 on the US album charts for a then record 20 weeks! This was Elvis' commercial peak! This is a wonderful reproduction of this recording. The sound is sharper and crisper than ever before. This is the only CD that I can say that the bonus tracks were just a much worth having and listening to as the original album tracks. If you like the 'Blue Hawaii' soundtrack then this is a dream come true.

Blue Hawaii is probably the movie most associated with Elvis Presley. It is also his most popular and endearing. Its soundtrack would sell three million copies and spend an astounding 20 weeks atop the American music charts. This was good news and bad news for the career of Elvis. The good news was the money and continued popularity. The bad news was that because of this success the future emphasis of the career of Elvis Presley would be focused on making movies quickly and releasing accompanying soundtrack albums. Studio releases would be few and far between, and live concert performances would cease. With this release FTD corrects the error with the 1997 issued CD where they incorrectly reversed the stereo channels. 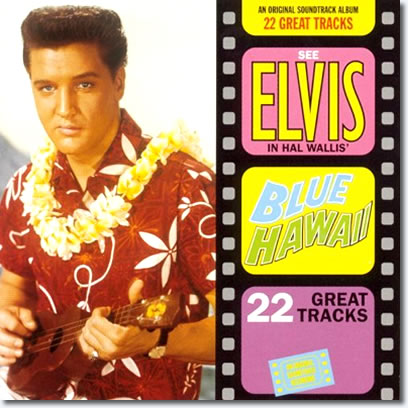 The movie, Blue Hawaii, had a lot going for it. Elvis looked good, and his voice was in fine shape. He appeared relaxed and interested and gives a fine acting performance. Also, it was 1961, and Hawaii was considered a far off, exotic location that most people would never visit. This was a winning combination for Elvis fans and for the moviegoing public at large. While the soundtrack to Blue Hawaii is a long way from Elvis' classic rock 'n' roll albums, it is still a fairly strong album and remains a very pleasurable listening experience.

The soundtrack contains one of the great Elvis Presley ballads. 'Can't Help Falling In Love' is still instantly recognizable over 45 years later. This song, featuring a sensitive vocal and romantic lyrics, has been played at who knows how many weddings and proms. It was released as a single and reached number two on the national charts. It was one of his first singles to be pulled off a Presley album.

Elvis' singles and albums were always kept separate so as not to interfere with each other commercially. 'Can't Help Falling In Love' would begin to change that philosophy. The song would also make a huge impact on the easy listening charts, remaining in the number one position for six weeks. It would continue to move Elvis further away from his rock roots. The title song, 'Blue Hawaii', had actually been around for awhile and had been recorded by the likes of Frank Sinatra and Bing Crosby. Today the song belongs to Elvis. 'Rock-a-Hula-Baby' would be released as the B side of 'Can't Help Falling In Love' and become a hit in its own right, reaching number 23 on the charts. This up-tempo song, that was a cross between rock and pop, was given a joyful performance by Elvis. You really need to watch the movie to fully appreciate this song. 'Hawaiian Wedding Song' is another strong ballad by Elvis and also works well within the context of the film.

There is a feel of Hawaii in the music. Songs such as 'Moonlight Swim', 'Hawaiian Sunset', 'Island Of Love' and 'Aloha Oe' make you almost smell the ocean and feel the tropical breezes. On the other hand, songs such as 'Ito Eats', 'Slicin' Sand' and 'Beach Boy Blues' merely serve to fill out the film and album. Songs of this nature and quality would appear all too often in future Elvis movies.

Blue Hawaii is rightfully placed at the top of the Elvis Presley movie list. Both the soundtrack and film are truly essential Elvis. They both represent the Elvis that we would like to remember. Another fabulous soundtrack release from FTD, The alternate 'album' of First Takes works extremely well and the packaging is very stylish. The newly remixed audio quality is astounding - especially on the outtakes. With this release FTD corrects the error with the 1997 issued CD where they incorrectly reversed the stereo channels.

Check out our reviews of ...

It Happened At The World's Fair

From the movie Blue Hawaii