Review : It Happened At The World's Fair FTD CD

It Happened At The World's Fair is a Special Edition extended movie soundtrack issued by FTD with improved re-mastering of the original LP, plus alternate takes. This special collector edition is housed in a 7" (17,5 cm) triple-fold-out cover with a 12 page booklet with information, photos and 'Behind the Scenes' facts. 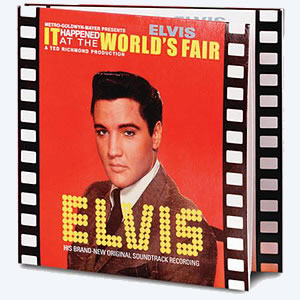 Thanks to another clever move from BMG's Roger Semon and Ernst Jorgensen, Elvis Presley's collector's label is now expanding its normal release schedule to include deluxe reissues of Elvis' deleted soundtrack recordings. Although this music can no longer be justified as viable product at normal retail outlets, through 'Follow That Dream' anyone can obtain the material on CD.

Housed in handsome, double fold out, 7" sleeves with full color information booklets, a 'retro' design and more than a dozen outtakes each, these gorgeous packages are a real treat for the hard core Elvis fanatic. The fidelity throughout is also remarkably clean. There's an old song about finding 'where the sands turnin' into gold' - and that is exactly the goal achieved with these 'bonus' Follow That Dream discs.

'It Happened At The World's Fair' was Presley's initial 1963 cinematic offering, continuing the 'filmed travelogue' with soundtrack album, assembly-line aspect of his career. Both the film and LP did reasonably well, by May the disc was in Billboard's top five, although this success fell far below the standards of even two years prior.

The music was recorded in two late 1962 sessions, at a point where neither Elvis nor the musicians had completely abandoned the notion that something worthy could be created in the Radio Recorders studio. The material suffered from an MGM requirement that the songs be taped without any echo, which deprives the result of any natural room ambiance. Despite this unfortunate decision, a few numbers remained successful.

Elvis is outstanding on two Don Robertson ballads, 'I'm Falling In Love Tonight' and 'They Remind Me Too Much Of You'. His commitment, plus the wistful, near-falsetto voice he so skilfully employed in many classic early sixties recordings, is total. Presley even invited Robertson to play piano and organ on the sessions -- an unprecedented display of affection for an Elvis songwriter.

The rest of the soundtrack is a wash of substandard or rehashed song craft, where both Elvis and his musicians seem as uninspired as the offerings. For example, a listener is left to ponder who could have possibly felt Elvis Presley needed to cut songs like 'Cotton Candy Land'. And apparently some in the Presley songwriting stable must have felt the pressure of too many soundtrack slots.

Ben Weisman and Fred Wise rewrite their previous year's lightweight pop of 'Riding The Rainbow' as 'Beyond The Bend' while Sid Tepper and Roy Bennett bastardize the R&B classic 'Fever' into 'Relax'. Weisman, with the help of Sid Wayne, also steals the main guitar hook in 'Night Rider' from Elvis' then-current studio LP Pot Luck to craft the new film's finale, 'Happy Ending'. Pomus and Shuman should've sued! Even the great team of Otis Blackwell and Winfield Scott can only muster the Jackie Wilson inspired 'One Broken Heart For Sale'.

In the bonus section, listen closely and you'll enjoy Presley riffing on his idol Dean Martin's 'From The Bottom Of My Heart' between takes of 'Beyond The Bend'. The inclusion of an unissued acetate of the rejected August 1962 master of 'Take Me To The Fair' shows that rhythm was just one part of the problem -- the tempo was also tricky. They finished it off with a remake a month later one outtake here reveals Elvis instructing guitarist Tiny Timbrell on the proper pace for the introduction, finally exclaiming 'you got the rhythm, hot diggity!'

This is hardly the best work of Elvis Presley's career. But providing unavailable material is what 'Follow That Dream' is all about. That these particular recordings are wrapped in a delightful, unique package is a brilliant idea -- even a Presley soundtrack cynic will find good reason to pick up a copy.

Take Me To The Fair

They Remind Me Too Much Of You

One Broken Heart For Sale

A World Of Our Own

Plus the alternate takes

Buy It Happened At The World's Fair

From the movie It Happened At The World's Fair